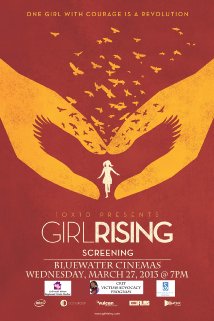 Girl Rising: A girl with courage is a revolution.

This is the gut-wrenching, heart-expanding documentary about nine girls–from Afghanistan, Cambodia, Egypt, Ethiopia, Haiti, India, Nepal, Peru, and Sierra Leone–who represent millions of girls denied schooling, forced into marriage, sold into slavery, who irrepressibly persevere to rise up. Directed by Academy Award-nominated director Richard E. Robbins with cinematography by David Rush Morrison, Girl Rising profiles girls like Suma, a Nepalese girl sold into “domestic service” to support her family; Amina, an Afghani girl married off at age eleven; Senna, a poet growing up in the “most dangerous” city in the world; and Sokha, an orphan who rises from the dumps of Cambodia to become a star student and a stunning traditional dancer.

More than “just” a film, however; Girl Rising is also the audio-visual catalyst for a movement. In partnership with the Pearson Foundation, the Girl Rising movement includes a free curriculum, available for download, and aligned to the Common Core Standards. It is one education component in a larger global social action campaign and grassroots movement to promote girls’ education, with the ultimate aim of alleviating world poverty. Like other related movements such as Miss Representation and Half the Sky, Girl Rising is both a powerful social-cause documentary and a wider campaign to raise awareness about the barriers that stand between girls and education, in an effort to use grassroots momentum and policy change to break down those barriers.

Martin Willitts, Jr. | One girl…and God is not amused
Casey FitzSimons | A view of my daughter’s childhood and other poems