PFC Solos stared down the barrel of his M4 carbine at the barren, sand-swept Iraqi countryside. He had been stranded on this hill for weeks, months, who knew how long. His platoon had been tasked with guarding radio towers, a thankless assignment that relegated him to this most remote outpost of nowhereistan.

It wasn’t what he signed up for.

The sergeant in the strip mall recruitment office never brought up anything about languishing for days alone on guard duty, being so bleary-eyed that dipping instant coffee plucked from MREs wouldn’t revive you in the least. He somehow never brought up anything about the interminable hours Solos spent guarding “everything within the limits of his post and quitting his post only when properly relieved,” “obeying his special orders and performing all his duties in a military manner,” “reporting violations of his special orders, emergencies, and anything not covered in his instructions to the commander of the relief.”

If he failed to recall any general orders verbatim when pressed, a non-commissioned officer would “drop him,” or force him to do a totally arbitrary number of push-ups.

Push-ups were body-weight exercises most popular in the military where people positioned themselves parallel to the ground and lifted themselves up with their pectoral muscles. If they had no sergeants to yell at them, they typically displayed atrocious posture, such as sagging their knees, failing to break the plane, or not extending their arms straight.

Push-ups were somehow omitted at the recruiter’s office, which was splashed with glossy, larger-than-life photos of service members leaping over logs and rappelling from helicopters. The recruiter sold Solos a bill of goods: college money, a big bonus, adventure in foreign lands, the discipline he lacked, and the kind of universal respectability that had been denied him.

The sales pitch blended fact and fiction: he ended up in Iraq with a $20,000 signing bonus he would ultimately fritter away but it was hardly an adventure. It was 120 degrees out and he was melting away. He was stuck on a hill in the middle of nowhere, no one respected him and no one likely ever would—not even the shameless flag idolaters who tried to politicize the seams out of that scrap of cloth back home.

Solos was bored out of his skull and lonesome as hell. He was forced to sit watching the same hostile landscape of sand, more sand and bare brush. It was a lonely duty. There was nothing but the wind and the heat and the confines of his mind.

But the private was accustomed to loneliness, it was his home address, his whole upbringing.

As a child, he was excluded from many recess activities for being awkward and unathletic. He spent lunches at the butt end of cafeteria tables, at the periphery of gaggles of gabbing kids. He seldom injected himself into their lively conversations, grew quieter and quieter, more and more withdrawn. His morose expression kept his classmates at a distance.

He grew so uncomfortable he would just retreat to the library, where he’d silently chew on a bologna sandwich in a hardwood chair as he craned to read some fusty hardcover.

Books were a bulwark against the loneliness, a way to escape the prison of his own skull. He had no such luxury in Iraq, at least not on guard duty. He’d stare off into a horizon that never changed, and his mind would drift and become consumed by repetitive thoughts: about how he ruined his life by enlisting, how he’d never get back on track if he even made it out of here alive and with all his limbs intact, and how he just needed the comfort of a mattress again. He’d challenge himself trying to remember songs, the lyrics or even just the melodies, and often came up short, confirming to himself how far removed he was from home. He tried to conjure up faces of people he’d known, and they would disintegrate like dust. Sometimes he’d sit there so long his mind would zone out entirely. Sometimes it would conjure up far-off movement when there was none.

It was a slog.

One night, he begrudgingly roused himself from his cot for his shift. Bleary-eyed, he slipped his hefty flak vest on yet again, checking the pouches to make sure they were full of magazines and the magazines were all loaded. He squeezed his Camelbak, which was low so he went to refill it.

A deafening boom shook the ground under his feet. Startled, Solos staggered back, stumbled onto the ground. He rallied back to his feet unsteadily, his ears ringing, snatched up his rifle and rushed outside.

Soldiers flocked to the perimeter. Solos ran up to the guard station, asked what was going on.

“We got mortared,” Pvt. Jenkins said.

A hand slapped Solos on the back, nearly knocking him over.

Solos ended up manning the .50 Cal on the Humvee as it roared down the hill, as fast as its phlegmatic diesel engine could go.

A .50 Cal was a belt-fed machine gun that was far too heavy to fire if not mounted, contrary to what G.I. Joe cartoons would have one believe. Its rounds were as big as a fist and could turn an engine block into scrap metal, but the barrel heated so much it had to get changed out during sustained use or it could blow up in the gunner’s face.

The QRF rolled up on an 81-mm mortar tube out in the desert. Solos scanned around in the gun turret as the others fanned out on foot to search for the mortarmen.

They were long gone. They had driven up in a pickup truck and placed a round encased in ice in the mortar tube, so it would slide down, strike the firing pin, and arc toward the outpost once the ice melted away. When the round hit, they’d be miles away.

Solos survived that attack and a few other close brushes.

He eventually found himself standing outside the gates of a public university, studying in a funky coffee shop with fish in a bathtub in the bathroom, and eventually settled into an office in a suburban landscape of low-slung silos of khakied and sensibly bloused workers glued to the computers in their cubicles for hours on end. Reintegration into society was a lot easier than the media made it seem. Maybe he was damaged, perhaps irreparably, but his body and mind still worked, and could function in an already barely civilized world where cutting someone off in traffic could incite them to follow you home and curb-stomp you to death while your children watched from the bay window.

“Just another crazy vet,” he joked when using his old, peeling military ID to get free Veterans Day meals or admission to museums.

“Lonesome no more!” he thought as he strode up the steps of St. Andrew the Most Selfless Prostate Martyr, an ornate Catholic church forged of marble and stained glass by skilled craftsmen who immigrated from Europe a century ago.

He couldn’t believe a woman as resplendent as Michelle would have anything to do with him, dote upon him so much, or think him so kind when he had once shoved a rifle into the face of innocent men whose homes they raided on bad intel. But she did.

He felt less lonely generally, cooking salmon and quinoa with her, cuddling, resting on an actual mattress instead of the hard ground or a burlap sack-thick cot.

But when he’d get dragged to restaurants and acquaintances would buy them drinks and they’d be forced to go over and chat, or when they made obligatory appearances at baby showers or anniversary parties, he’d feel that tidal pull back toward the island of self. He’d be invited to serve on a professional organization’s panel at a chic real estate office amid tall, svelte, stylish and impeccably dressed people clutching designer handbags and opalescent longnecks of imported beer, and want nothing more than to step into the solitude of the bathroom.

He felt cowed, a hollow-eyed, wrinkled mess who wandered somewhere he didn’t belong. He cringed at earnest questions about strategy. The alienation persisted even after his wife, who ducked out of work, turned up near the end to offer moral support.

Afterward, they dined at a nearby restaurant, recounted their days, and enumerated their many gripes. He kissed her at her car, told her he’d see her back at the fort. Sick with too many pleasantries, too many clasped hands and awkward hugs, he wandered around the desolate courthouse square a few times before heading back to his car, striding through the empty sidewalks in the hope of recapturing that expansive lonesomeness—a loneliness as vast as the romanticized, tumble-weeded west—the lonesomeness that once had nourished him so. 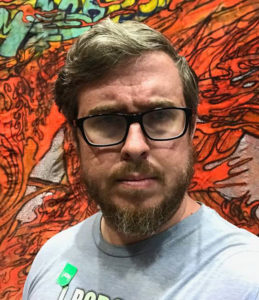 Joseph S. Pete is an award-winning journalist, an Iraq War veteran, an Indiana University graduate, a book reviewer, a photographer, and a frequent guest on Lakeshore Public Radio. He is a 2017 Pushcart Prize and Best of the Net nominee who has read his work for the Fictitious series on the iO Theater stage in Chicago, who staged a play at the Detroit Heritage Theater Festival, who showcased his photography at the Oddtropolis Art Show in San Fransisco, and who was named the poet laureate of Chicago BaconFest, a feat that Geoffrey Chaucer chump never accomplished. His literary or photographic work has appeared or is forthcoming in more than 100 journals, including The Tipton Poetry Journal, Chicago Literati, The Vignette Review, Voicemail Poems, Dogzplot, Proximity Magazine, Stoneboat, The High Window, Synesthesia Literary Journal, Steep Street Journal, Beautiful Losers, New Pop Lit, The Grief Diaries, Gravel, The Offbeat, Oddball Magazine, The Perch Magazine, The First Line, Bull Men’s Fiction, Rising Phoenix Review, Thoughtful Dog, shufPoetry, The Roaring Muse, Prairie Winds, Blue Collar Review, The Rat’s Ass Review, Euphemism, Jenny Magazine, Vending Machine Press and elsewhere. He is a participant on social media.