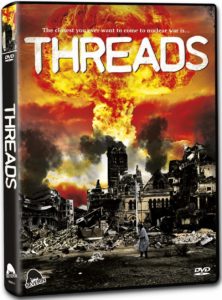 This pioneering 1984 BBC film tells the fictional story of several British families before, during, and after an all-out nuclear exchange between the United States and the then-Soviet Union. Worried about the complacency with which the public seems to view nuclear war, the filmmakers intended to scare people and they were very successful. Reviewers have called it “the most disturbing film” they’ve ever seen, as they watch the slow death of every character in the film, along with the destruction of ecosystems across the planet, reducing the global population to levels last seen in the Dark Ages. Threads is available from Amazon and also streams for free on the Internet Archive. 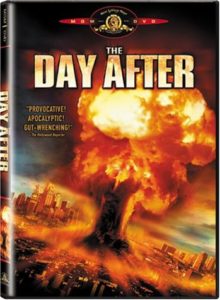 The Day After is the United States’ own made-for-television film about the horrors of a nuclear war. Like Threads, it tells the story of several families whose lives become interconnected when a nuclear exchange decimates their small town in Kansas. Families are killed, blinded, irradiated; healthcare systems are overwhelmed; government fails; chaos reigns; agriculture is ruined, and civilization collapses. More than 100 million people, in nearly 39 million households, watched the program during its initial broadcast on ABC on November 20, 1983, setting a record as the highest-rated television film in history—a record it still held as recently as a 2009 report. Written by Edward Hume, directed by Nicholas Meyer, and starring Jason Robards, JoBeth Williams, Steve Guttenberg, John Collum, John Lithgow, and Amy Madigan, the network had a hard time finding advertisers to sponsor the film; argued over how accurately to portray the war’s impact; and ultimately compromised on a 126-minute version of the original 180-minute film.

To direct the film, Meyer undertook several months of nuclear research that ultimately made him quite pessimistic about the future; indeed, he reportedly became ill each evening after returning home from work. Meyer and producer Robert Papazian also made numerous trips to the ABC censors and to the United States Department of Defense during their research phase, experiencing conflicts with both. Meyer had many heated arguments over elements in the script that the network censors wanted to eliminate. The Department of Defense said it would cooperate with ABC only if the script made clear that the Soviet Union launched its missiles first, which Meyer and Papazian refused to do.

Although television critic Matt Zoller Seitz called The Day After, “Very possibly the bleakest TV-movie ever broadcast,” it, in fact, soft-pedaled the devastation. Meyer was able to negotiate with ABC a disclaimer that followed the credits, letting viewers know that The Day After downplayed the true effects of nuclear war so they would be able to tell the story.

Although Meyer was criticized by some in the press as a traitor, the film had its intended effect on government policymakers of the time. President Ronald Reagan wrote in his diary that the film was “very effective and left me greatly depressed,” changing his mind on the prevailing policy on a nuclear war, leading to his willingness to sign the Intermediate-Range Nuclear Treaty four years later. The film was also screened for the Joint Chiefs of Staff. A friend of Meyer’s who attended the screening told him, “If you wanted to draw blood, you did it. Those guys sat there like they were turned to stone.” One could argue that filmmaking doesn’t get more effective than that.

The film is now available on DVD from Amazon.

Dr. Strangelove, or How I learned to stop worrying and love the bomb

Using satire to help the medicine go down, this 1964 film by Stanley Kubrick focuses on the insanity of the Cold War nuclear policy of “mutually assured destruction,” and depicts how an accident could trigger this mutually assured destruction (which has very nearly happened on more than one occasion). Starring Peter Sellers in four major roles, the film is distressingly funny, because you realize you’re laughing at the dire predicament you’re actually living.

According to reports, Kubrick originally intended to direct the story as a serious drama based on the thriller novel Red Alert by Peter George. However, as he later explained in interviews, he began to see the absurdity inherent in the idea of mutual assured destruction:

“My idea of doing it as a nightmare comedy came in the early weeks of working on the screenplay. I found that in trying to put meat on the bones and to imagine the scenes fully, one had to keep leaving out of it things which were either absurd or paradoxical, in order to keep it from being funny; and these things seemed to be close to the heart of the scenes in question.”

It is available on Amazon, Hulu, Netflix, and other platforms. You can also stream it free on the Internet Archive. 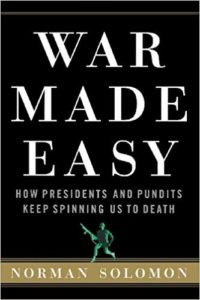 War Made Easy exposes a 50-year pattern of government deception and media spin that has dragged the United States into one war after another from Vietnam to Iraq. Narrated by actor and activist Sean Penn, the film exhumes remarkable archival footage of official distortion and exaggeration from LBJ to George W. Bush, revealing in stunning detail how the American news media have uncritically disseminated the pro-war messages of successive presidential administrations. 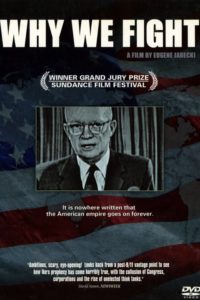 Why We Fight is a 2005 documentary describing the rise and maintenance of the United States’ military–industrial complex and its 50-year history of leading the country into wars, particularly our 2003 Invasion of Iraq. The documentary asserts that in every decade since World War II, the American public has been misled into war by the incumbent administration, fueling the war economy that underwrites American hegemony in the world. Featuring interviews with Senator John McCain, former CIA analyst Chalmers Johnson, Pentagon Defense Policy Board chairman and co-architect of the G. W. Bush administration’s foreign policy Richard Perle, neoconservative commentator William Kristol, writer Gore Vidal, and public policy expert Joseph Cirincione, Why We Fight documents the consequences of said foreign policy on the lives of individual Americans: a father who asks the military to write the name of his son, killed on 9/11, on any bomb to be dropped in Iraq; a 23-year-old New Yorker who enlists in the United States Army as a way out of poverty and debt; and a military explosives scientist (Anh Duong) who arrived in the U.S. as a child refugee from Vietnam in 1975.

Ours is a fate President Dwight D. Eisenhower warned the country about in a speech given three days before the end of his term of office in 1961:

“In the councils of government, we must guard against the acquisition of unwarranted influence, whether sought or unsought, by the military-industrial complex. The potential for the disastrous rise of misplaced power exists and will persist. We must never let the weight of this combination endanger our liberties or democratic processes. We should take nothing for granted. Only an alert and knowledgeable citizenry can compel the proper meshing of the huge industrial and military machinery of defense with our peaceful methods and goals, so that security and liberty may prosper together.”

Since that speech, both Republican and Democratic presidents have involved the United States in wars around the world in the name of freedom including Vietnam, Grenada, Panama, Somalia, Afghanistan, and Iraq. The machinery of war has become our nation’s leading industry and nearly 52 percent of all federal spending goes to the military budget.

Why we fight’s list of producers included more than a dozen organizations—from the Canadian Broadcasting Corporation to the BBC and numerous European broadcasters, but no U.S. names. Writer and director Jarecki said “serious examination of Eisenhower and the aftermath of his speech proved ‘too radical’ for potential American funders for his film” and, except for Sundance, which contributed to the film’s completion, he “could not raise a dollar in the U.S.”

The film won the 2005 Sundance Grand Jury Prize for Documentary, received a limited public cinema release on January 22, 2006, and then was released on DVD on June 27, 2006, by Sony Pictures Home Entertainment. It can be viewed on Amazon, Netflix, Yidio, and other platforms. NOTE: Why we fight is named after Frank Capra’s three-part propaganda film made for the U.S. government to explain the country’s entrance into WWII. Capra’s film is available for free on YouTube.