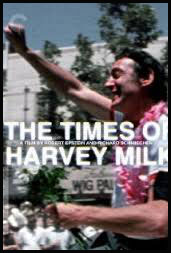 There are countless films that chronicle the difficult delivery of something new—be it a new social order, a new government, a new invention, a new way of doing something. I’m thinking of films like Gandhi, Pollock, and even Tucker. But because this page is devoted to “Movies You Might’ve Missed,” I’d like to mention one—The Times of Harvey Milk—that portrays the work of an individual to change the status quo at great personal cost. One might even say that the birth proved fatal to the “mother,” although the child lived and grew strong.

The ebullient Milk knew that his lifestyle and office exposed to him to personal risk; he even wrote a letter to be opened in the event of his assassination, which occurred just a few months later at the hands of fellow Supervisor Dan White. The film documents the outpouring of joy at Milk’s election; of grief at his assassination—along with then-Mayor Moscone—and outrage when White received a lenient sentence for the double murder.

Through interviews with co-workers, news reporters, union representatives, and others, Epstein shows us that Milk’s success was in his humanity. Working class people instinctively felt that he understood their challenges and would champion their concerns. Particularly effective is the character arc completed by Allan Baird, a Teamsters Union leader, who admits that, prior to knowing Milk he wouldn’t have been overly concerned about the killing of a “fruit.” Knowing Milk had made him realize how blind and wrong he had been.

The film won the Academy Award for Best Documentary Feature for 1984 and was awarded a Special Jury Prize at the first Sundance Film Festival, among other awards. In 2012, the film was deemed “culturally, historically, or aesthetically significant” by the United States Library of Congress and selected for preservation in the National Film Registry. It is a moving and memorable piece of filmmaking, which was especially powerful to see again this year (2013) as gay couples won two major U.S. Supreme Court rulings effectively acknowledging their right to marry. The first granted them the right to federal benefits enjoyed by other married couples; the second refused to hear a challenge to California’s equal rights law permitting gays to marry.