What once was painted on the body
now offered in prayers
the power of spirit,
make no mistake, this is war

Now offered in prayers
to preserve the mother
make no mistake, this is war
return to the old shelters

Greed comes to spray its poison

So the children will know
the power of spirit
trust in the arms of the mother
what was once painted on the body.

Just over there, a northern cloud
bears down as if a grey beast is birthing,
Downward through the evening twilight
something unknown to us. Look up

at this darkening, our lips form little “wows,”
like the stunned mouths of just netted fish
In the days that are forgotten.

How can this be the same sky
From the full moon fell Nokomis
that from the west waves a trickle of pink,
like a silk scarf at the bedding sun?
And the West-Wind came at evening.
In that direction, it’s all seduction.

This geography is so different
than the one we just left.
Whispering to the leaves and blossoms,
There, each September, the maples endure a steady disrobing:
leaves grounded, scattered reminders
of daily abandonments.
Hiawatha’s gentle mother in her anguish died deserted.

Here the palms lie open all year,
each one a green invitation to stay.

And yet, maybe it’s too simple
this sand and sea promise: a little girl,
Ewa-yea! my little owlet!
all turqoised out in her bathing suit

runs to the sand hill crane that uncoils to its full height,
its wings a sudden giant vee, and for a moment
learned of every bird its language,
they become their own new myth,
winged with feathers
girl and bird, returned to sky. 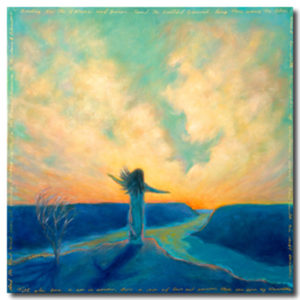 Babo Kamel’s poems have appeared in literary reviews in the US, Australia, and Canada, including Painted Bride Quarterly, Abyss & Apex, The Greensboro Review, Alligator Juniper, The Grolier Poetry Prize, Contemporary Verse 2, Rust +Moth, and Mobius, a Journal of Social Change, and 2River Review. She was a winner of The Charlotte Newberger Poetry Prize, which was published in Lilith Magazine and was recently nominated for a Pushcart. For the past year, she has been working on a series of poems focused on the paintings of Marc Chagall.

Jane Dierberger is inspired by many things, but nature is her primary inspiration for creativity. Nature represents timelessness; truth; absolute beauty; peace and harmony. To see more of the Hiawatha Series or other paintings by Jane, visit the Stillwater Art Guild Gallery in Stillwater, MN or her online gallery at www.artguildgallery.com/artists/painters.