In August 2018, a bus carrying school children in Yemen was hit by a missile mistaking them for rebels. This poem is about its aftermath.

Blankets,
Multicolored, used blankets
That’s what they brought them in
Wrapped and ensconced
Almost as if they were asleep
In a way, they were, weren’t they?
Small bundles, medium-size bundles
And some large ones too
All shapes and all colors
Never knew they could come in such varieties
Now they placed these on the ground
And the mob gathered, rushed to them
As if they contained treasures

Well almost, they were treasures
Or at least used to be
The reactions were different when the folds were opened
Stunned silence, wails and sobs
And of course the obligatory calls to almighty
(Ignored)

The dusty roads threw up dust, which heralded the coming
Of another vehicle bearing gifts
And those of us standing empty-handed and in wait
Knew, that very soon we’d be on the receiving end.
Wails, mourns, tears, blankets!
So very useful indeed

So there were two pickups
And they came to a screeching halt
Just before the gathered crowd,
They had hardly stopped when some immediately reached into the rear
And then bundles in blankets, lots of them
For all of us!

Saw a turquoise blue one this time
Very artsy with embroidery
Wondering if mine was wrapped in it
Took steps towards the truck
And the guy standing in the rear was hollering
To come quickly as if he was distributing free food or some boon
Feet seemed stuck to the ground as if tied to ball and chain
But had to get there, someone was waiting
If to find solace in the craziest of things

It was the blue one after all
And in it was folded something else too, an answer
A whole life of prayer and obedience
And one day
You’ll be made to receive the body of your child
From the back of a rusty pickup truck

Wrapped in a turquoise embroidered blanket 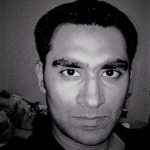 Rizwan Saleem is a banker based in Dubai, UAE., who writes about the various escapades he has suffered through life and his profound surprise at having survived long enough to pen them into words. His poems and prose have appeared in the following anthologies: Twenty Seven Signs (Lady Chaos Press), Self Portrait Poetry Collection (Silver Birch Press), E fiction India, Scarlet Leaf Publishing, as well as Colors of Refuge.