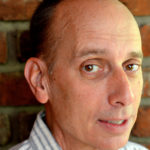 I WAS SITTING in Miss Jerolee’s Trims ‘n Tans. It’s my grandma’s beauty parlor, my mom’s mom, and everybody calls her Miss Jeri, or just Jeri. Even me if anybody’s in earshot ‘cause she says she don’t look old enough to be a grandmother. She does. Dad used to say she’s “fighting the good fight” but spray tan and teeth whitener can only take you so far. The tanning bed’s been broke as long as I can remember and she gets the spray tan wholesale with her beautician license. She’s orange as the big barrels of cheese curls I like so much from the Dollar General, and her teeth glow like those fluorescent pigtail lights.

Miss Jerolee’s was packed full of high school girls, all tattooed and snake bit, getting their hair and nails done up for prom, but it still smelt like chemicals and burnt hair and old lady BO. The clouds were piling up outside and to take my mind off them, I was looking at an old Cosmo hoping it wouldn’t rain. That’s all there is, three-year-old Cosmos with covers wavy from coffee rings and the sweat off all those diet Mountain Dews. There was an article called “How to Drive Your Man Wild in Bed,” and the yellow-eyed girl sitting next to me waved a loose hand over the pages and said, “Hell, that’s easy. Just give ‘em a handful of titty and leave the lights on.”

I thought she was done because she smiled a lazy smile and blinked real slow like mom does when she’s on the Oxy. Then she said, “But don’t never let ‘em stick it in your…”

Jeri yelled, “Got-damn it, Sasha! I know you’re not setting there talking to my grandbaby with that mouth. I’ll jerk those studs out of your lip and stick this curling iron in your backdoor – see what you got to say then.”

Sasha pulled at her lip, worrying one of her infected studs and laughed a thin laugh, “I don’t know, Miss Jerolee, I might just like that. You never can tell.”

I’m not a baby but Jeri still thinks I am. I’m starting 8th grade next year. Not that I guess I should be reading about how to drive my man wild in bed, ‘cause I don’t have a man or even a boyfriend and even if I did I don’t think I’d be doing what they’re telling me to do without a blindfold and a big bottle of mouthwash.

Jeri pointed the curling iron at me and said, “Amber, she opens her yap agin you just holler. She’ll go to prom with that Franklin trash looking like something the cat drug in.”

Sasha pouted and said, “Bobby’s not trash. Them Franklins is good people.”

Some of the other girls laughed and Sasha said, “Hell, if I got to listen to you badmouth my boyfriend, I might just as well take my business on over to the Great Clips.”

Jeri choked on a laugh and wheezed, “Don’t let the screendoor hit your fat ass. And be sure to stop by when Tina’s done chewing you over. We could all use a laugh.”

I couldn’t help laughing at that one, not at Sasha but at Grandma. Dad always used to say if you lost your butthole, she’s your gal ‘cause she’ll tear you a new one right quick. But a lot of folks say the same thing about him even though they’re not blood kin.

Sasha glared at me and said, “What’re you laughing at?”

Jeri eyeballed Sasha and said, “Amber, why don’t you go in back and see how Kim’s getting on. See to her trash or something.”

Sasha watched Jeri turn back around and hissed, “Your momma still bumping donuts with that big dyke at the Dollar General?”

I’m usually pretty quiet ‘cause it helps to keep your head down most of the time, but I’ve had enough ‘Amber has two mommies’ horseshit to last me a couple of lifetimes, so I tilted my head a little her way and said, “No. They ain’t keeping company no more.”

As of last night anyway. That old man that lives by where Mae works killed himself and his cat and Mae cried and cried. I don’t know if she was crying about the old man or the cat. His son got killed in Iraq or Afghanistan and the V.F.W. put a pair of bronzed combat boots in front of the school. Mom said she didn’t give two shits about that crazy old man or his stupid cat or his lardass wife that nobody’s seen in years and that’s what started the fight. At least that’s what started the fight last night. Mae stuffed all our crap in black trash bags and piled them out next to the road at the end of the gravel track up to her trailer, while mom wore a path in the front yard like a chained dog, working that prepaid cell phone trying to find something and somebody to bring it to her. I’d thought she was trying to find somebody with a truck to move all our stuff and I knew she wouldn’t call Dad. I don’t think Mom’s a lesbian, not a real one anyway, she just likes whoever likes her and the plumbing don’t seem to matter much. She is just like a stupid dog that way, somebody scratches her behind the ears and we follow them home. I just don’t know why every time she goes crazy, I have to lose half of my clothes and toys and everything that’s mine. There’s some of my stuff at Dad’s, and at Jeri’s, and at my aunt’s up near Akron, and most of the rest just disappears. When school started this year, the daughter of some guy she was screwing last summer showed up to homeroom wearing my purple t-shirt with the sparkly unicorn.

I turned away from Sasha, like I was going back to reading about how to drive my man wild in bed, and said, “How’s that Hep C working out for you? Sure looks like fun.”

Sasha jumped up, wobbling on her stripper heels, and shouted at Jeri, “You ought to be proud of yourself, she’s gonna be just like you.” She clicked her way to the cracked plastic front door and jerked it open, “Real goddamn proud.”

She stomped out and nobody said anything until Jeri asked, “Amber, honey, you need a cold pop or something?”

I shook my head and said, “Think we’ll get out there before the rain?” There was only one thing I was really worried about, but I couldn’t tell Grandma what it was.

Jeri made a circle, pointing to all of the girls, the smoke from her cigarette making a lazy spiral in the thick air. She shrugged her shoulders, “I’m doing my best.” Then she jerked her head and said, “See how Kim’s getting on.”

When I passed close by, she whispered, “Your dad home yet?”

I said, “No, I just tried a few minutes ago. Still no answer.”

She asked, “You call the garage?”

I nodded then shook my head, “Didn’t show up this morning.” He works over at the Discount Tire and they’re only open a half day Saturdays and he only shows up half the time. He drinks some cheap beer called Hudepohl and he calls it the “Hudy Flu.”

She stretched her lips into a thin frown, “Well, that ain’t good.”

Probably not. He never picked up last night either. It’s a little late in the day for him to still be passed out in his truck, so my money’s on the drunk tank at the County Deputy substation, or he’s just disappeared for the weekend. He does that a lot. Sometimes he’ll cross the river at Ironton and follow the Tug Fork down almost to Virginia, down as far as Matewan and Red Jacket where his mom was born.

We were made for these times

George H. Northrup | Not sure we WERE made for these times
An unprecedented opportunity | An interview with Rev. angel Kyodo williams