I close my eyes
and listen
to the birds.
I can’t name them,
but it doesn’t matter,
I can still feast on their song.
Song,
well some sing beautifully,
others need to learn.
I sympathize with them,
I can’t sing either,
but there’s no shame
It doesn’t matter.
There’s no one to hear me
if I join in. 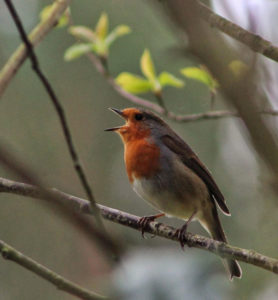 Lynn White lives in north Wales. Her work is influenced by issues of social justice and current events, places and people she has known or imagined. She is especially interested in exploring the boundaries of dream, fantasy and reality. Her poem ‘A Rose For Gaza’ was shortlisted for the Theatre Cloud ‘War Poetry for Today’ competition in 2014. This and many other poems have been widely published in anthologies such as Alice In Wonderland by Silver Birch Press, The Border Crossed Us and Rise from Vagabond Press, and Selfhood from Trancendence Zero, and in journals such as Apogee, Firewords Quarterly, Indie Soleil, Midnight Circus and Snapdragon, as well as many other online and print publications. lynnwhitepoetry.blogspot.com