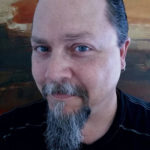 World Wars and the Greatest Generation, those
great cold causes decades past. We wring our
hands wondering why all the new teachers

aren’t teaching what should be taught about war.
Times have changed, people love to spout. Yes,
they have, and the callousing is complete. Gone

are the good old days when the daily allowance
of violence consumption was a trickle, maybe
a distancing black and white photo occasionally,

blurred and bloodless, of floating bodies on a shore,
a few shots of near skeletal remains when the word
damn was only just heard in a film in 1939, while

now you can watch black men’s lives being taken
by forty rounds, replayed to your broken heart’s
desire from citizen footage uploaded in real time

to Youtube or Facebook. But these young people
know war. But what they’re too young still to
even voice, though they’ve been shoved down

the cannons for fodder, is that they’ve known
the longest war now, and not only “over there,”
but “over here.” Even when you fought Hitler’s

insanity and the invisible Russian communists
around every corner, you never had a fellow
high schooler shoot you down in the cafeteria,

never had to worry about another middle school
student bringing a loaded gun in their backpack,
never had a man off the street walk in and kill

you and your fellow grade schoolers when you
can’t even spell the word gun or dead. Never
had to deal with that terrorism on top of other

terrorists claiming some last minute desperation
fame affiliation on Twitter or Facebook before
shooting up a club or bombing a marathon,

tracing their anger loosely down the tree limbs
back to a date that is the pre-history of most
of these kids. So we want to call them sheltered

and entitled, want to lash out at their need for
safe-speech zones and a respect for their triggers.
How about a PTSD-free culture for this so-called

Lost Generation we conceived and grew from
the wounded ADHD womb up? After all, lost
is often just another word for the abandoned.

We were made for these times