Noon, I’m next in line behind an old man.
“I want to withdraw fourteen dollars,” he says.
The teller, a young woman with a soft sweater, says
“There’s only—let me check—yes—fifty-two cents.”
“Are you sure?”
“Yes.” She tilts her head. “Sorry.”
The sorrow is genuine.
He wears a pinstripe suit, frayed,
wafting an ancient odor of smoke and earth.
A smartly folded handkerchief, breast pocket,
has a dark stain. His silver beard
is neatly trimmed.

On one wall above the safe is a giant
mural of teamsters driving a stagecoach.
The sadly dignified man says, “There might be—”
“No. It’s always the same.”
For a moment he closes his eyes,
a slow blink while thoughts of a lifetime pass.
Without a word, the young woman slides a sandwich
over the countertop through the teller window.
“Blessings on you,” the man says with a nod,
and he walks away with a limp.

I cash my check, a big one
from three days of messy labor
for a matron of the horsey set.
“He lives by the creek,” the teller says
without my asking. “Under a bridge.”
Outside the bank, in the parking lot of glistening cars,
I look around for the pinstripe suit, the silver beard.
I might offer the man something.
He might refuse to take it.
Anyway, no matter:
he has disappeared like the last stagecoach.
Only the blessing remains. 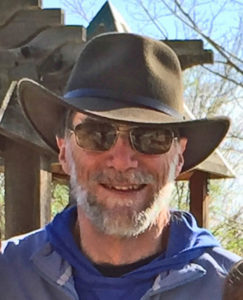 Joe Cottonwood is a frequent contributor to The MOON, thank God. He lives with his high school sweetheart in La Honda, California. JoeCottonwood.com.

Beyond capitalism, Economics for a small planet, Sharing the wealth