Distant rumblings, like fog, come sounding footsteps,
strangers gifting me.
A woman on a Jerusalem bus asks with her eyes:
“Feel the earth
shift slightly on its axis?”
I write on a white board with blue marker:
“Jot down the first time the sea parted for you;
be specific.”
Today in my garden,
a blade of grass surprised by my not stepping on it,
straightened up to its full mint julep height
to thank me for my compassion.

All that pales before the twitch of your back muscles,
ripples of waves breaking beneath your fitted shirt,
as you sense me approaching.

Lilacs in Bloom
Bahera, hello, were we to end here because of the hard times, with unanswered emails, the loss would be more than not yet budded flower of lilacs, the fragile friendship of two women, one Jewish, one Arab, mothers of sons, the ease of them together flowing as the waterfall where we sat and laughed and shared what your girlhood was in the North of Israel, speaking Hebrew, savoring Jewish stew flavored with Arab spices and the other way around, and my girlhood in Brooklyn, almost entirely ethnic, tasting of Italian pizza, Irish potatoes, Jewish kugles. I will not say that were it to end like this there will be more instances than we would like to think of sleeping thirteen year old girls dying in their beds, the life blood flowing out of them, never to reach womanhood. I will hold back from those images, but the promise, Bahera, of there being ten years hence two women such as we, sitting and lunching at Mamilla as we did, embracing each other with our smiles, while others look on, wondering, marveling, would be reduced, and the sight of lilacs in full bloom gracing our land, sending out their sweet aroma will remain a dream of dwellers on the Golan Heights, and visitors to Jerusalem’s botanical garden. 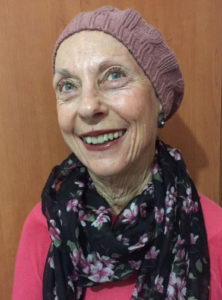 Joanne Jackson Yelenik’s poems and stories have appeared in anthologies and journals, most recently, her prose poem, A Chat, appeared in Unbroken Journal, issue #10. She teaches in the fields of history and literature. A favorite writing spot is her garden, or a picnic table in the neighboring Judean Hills. Her debut novel, Eucalyptus Leaves: Deliciously Asymmetrical in Israel, will be launched in the spring.

Others I have known, The quantum issue