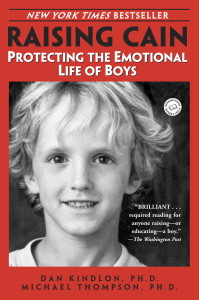 WHAT BOYS NEED, FIRST AND FOREMOST, is to be seen through a different lens than tradition prescribes. Individually, and as a culture, we must discard the distorted view of boys that ignores or denies their capacity for feelings, the view that colors even boys’ perceptions of themselves as above or outside a life of emotions. We must recognize the harm in asking “too much and not enough” of them—in demanding more at times than they are developmentally able to give while unnecessarily lowering expectations of self-control, empathy, emotional honesty, and moral responsibility. We bristle when we hear destructive or disappointing boy behavior excused with “boys will be boys,” when the truth of those words—boys will be boys—could instead be used to advance the understanding that boys struggle in uniquely male ways at times, and they need “boy-friendly” adult love, support, and guidance to develop a broad range of emotional responses to life’s challenges. They do not need to be excused from the struggle to be good people. It has been our hope throughout this book that the reader would see boys anew through our experiences as therapists to boys and would, as a result, be moved to examine his or her deepest assumptions about boys.

How can parents and teachers do this? In one sense, the answers defy generalization, so individual are the circumstances of any one boy’s life—his physical and emotional issues and the family, school, and community context of his life. Does this boy “need” more sports in his life? Does that one need more music? Does he need to spend less time on the computer? Different games? Different friends? Advanced schoolwork to challenge him as a learner, or a lighter academic load to allow for greater diversity in his pursuits? More routine or less structure?

The following seven points have the potential to transform the way you nurture and protect the emotional life of the boy in your life. The points aren’t snappy one-liners, which we feel ignore the complexity of real lives. We are psychologists, therapists, after all; we believe in the substance, not slogans, of emotional awareness and growth. Every boy’s internal life and journey are unique, but in these seven ways, all boys’ needs are precisely the same. These are the foundations of parenting, teaching, and creating communities that respect and cultivate the inner life of boys:

1. Give boys permission to have an internal life, approval for the full range of human emotions, and help in developing an emotional vocabulary so that they may better understand themselves and communicate more effectively with others.

The simple idea here is that you consciously speak to a boy’s internal life all the time, whether he is aware of it or not. You respect it, you take it into account, you make reference to it, you share your own. There is something of the prophecy fulfilled here. That is, if you act as if your son has an internal life—if you assume that he does, along with every other human being—then soon he will take it into account.

Instead of saying, “You can try out for soccer or be in the school play this fall. Which do you want to do?” you might say, “I know you were disappointed about not getting a part in the play last year. Do you want to take the risk and try out again? I also know that soccer has been an old friend to you, but I’ve sensed that you were losing interest in it these last two seasons. What do you think you want to do this fall? How are you going to choose between the two?” The question assumes pain, internal conflict, risk, courage, complexity.

We know a school, an all-boys school, that has traditionally had a very strong adult athletic department and a “winning tradition.” At the beginning of the last season, the football coach stood up and asked his players, “What is my job as coach?” The boys said a number of things: to teach us skills, to motivate us, to make us work hard. When they had exhausted their suggestions, the coach said, “Well it is all of those things, but I’ll tell you what my real job is. It is to love you.” Many boys squirmed in discomfort when he said this; they did not know what to make of it. However, following an up-and-down season, with some spectacular wins and some dreadful losses, the two captains of the team spoke at the final athletic banquet, and they announced that they felt great about the season and had really loved their teammates. Everyone there was moved by this declaration and admired the fact that these two “tough” football captains had said such a thing at an athletic banquet. How many people realized that it was the football coach, through his own choice of words and his coaching style, who had given them “permission” to speak in that way, modeled the way a many can say such a thing?

A much-loved teacher said to us, “Boys will be open about their feelings if you create a safe environment for it.”

We see this happening in classrooms where students are asked to keep journals, write essays, create art, or engage in discussions about feelings—their own or others,’ or those of characters in history or literature. It is not at all unusual for a boy who “never talks about his feelings” and struggles to hide his own vulnerability to talk easily about the vulnerability and fears that a fictional boy feels. This is valuable talk; this is one way a boy learns the emotional vocabulary he needs to eventually understand and express his own feelings.

An elementary school in Virginia published an account that an eighth-grade boy named Casey Johnson had written English class about his life as a very successful soccer goalie. He titled it, “Being a Goalie.” It is a clear reflection of a boy’s constant emotional processing of life—even when all those around would swear he’s just out there tending goal:

People say that a goal is not the goalie’s fault; it’s the team’s. But we all know that they really think it’s the goalie’s fault. I know that if the other team scores, it’s my fault. Waterford kicked off. As they brought the ball down the field, I yelled, telling my defenders to cover the open men. The Waterford player with the ball faked out his defender, took two more strides and shot. I dove. I heard cheering. I knew they had scored. I rolled over and saw the back of the goal. I had failed my team again. I got up and wiped the mud off my hands and legs. One of my teammates said, “It’s not your fault, Casey. It was the team’s.” I knew he thought it was my fault, but I said “thanks” anyway.

After the Waterford team scores one more, and then a final goal, the boy writes:

Michael Gurian | Jack and the Beanstalk
The Wonder of Boys