Michael Gurian | Jack and the Beanstalk 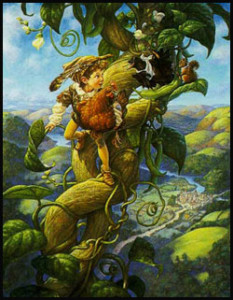 ONCE UPON A TIME there was a mother and a son named Jack. Jack was becoming older and his mother thought, “Well, it’s time to give him a little more responsibility. Our cow is getting old and no longer gives milk. I’ll ask Jack to take the cow to the market and sell her.” Jack and his mother were poor people, so this was a big responsibility. If Jack failed, he and his mother would not be able to buy food to eat.

Jack set out toward town and met on his way an elder man. The man asked, “Where are you going with that cow?”

“To the market to sell it,” replied Jack.

He produced from within his coat a bag of magic seeds. They glowed, which intrigued Jack. The man said, “These seeds have more magic than money. Give me your cow, and I’ll give you these.”

So Jack took the seeds home and showed them proudly to his mother. His mother could not believe her eyes. She sent Jack to bed without supper, for there was no supper, and she tossed the seeds out the window in frustration.

What’s happening here? Is this just a simple tale of a boy who blows it?

Here is a mother who realizes that her son needs more responsibility. He’s getting older. He needs to learn how to handle things when the very food they eat is at stake. So she lets him sell the cow. Mothers who let their sons mature into men do this in many ways: giving sons the responsibility for driving them places, sending sons shopping, giving the sons the responsibility to deposit money in bank accounts. There are thousands of ways mothers give responsibility. At the same time, there are a few very important, symbolic ways that imitate the selling of the cow. If you are a mother, think of what these ways are: letting the boy go on his first one-week camping trip, letting the boy stay out all night for the first time, trusting the boy with your car or some other very valuable family possession. When the mother gives the son responsibility over the cow, she is trusting him to act like a man. There’s even more to this cow. It gives milk. This is a predominantly female image. The elder man gives the boy seeds, a predominantly male image. So the story is showing us how the boy must trade now some of the known and trusted and female for the unknown, risky, but magical male. Every aware mother has seen that son’s look in his eyes when he reaches Jack’s age (in stories we never know the exact age, so we can each fill in what fits for our lives). It is a look of a youth who has, for now, had enough of mom’s milk and wants some different risk, some new magic, some male magic.

The role of the mentor

The elder man—the mentor—is the giver of the magic seeds. Those seeds will create for Jack his initiatory journey. This mentor is a guiding presence in the boy’s journey. The role of the mentor in the initiation of the youth is the role of transitional parent—the parent(s) who helps the boy go from childhood in his parents’ home to adulthood on his own. In tribes, the male mentor is often picked by the father. Just as often, he is a community member who forms a non-chosen affinity with the boy, and the boy with him. Always, the boy knows he has a mentor when he receives from the mentor or a skill or way of doing things that connects him to his own “magic.”

This magic is difficult to name and different for every boy. Parents see it in their kids’ gifts for music, or drawing, or talking. Mentors see it too, though they’ll often see different gifts than the parents saw. As a transitional parent, the mentor’s job is to guide the boy toward a path of initiation, support the boy throughout his initiation, and help him interpret his initiation, and thus integrate it into his manhood.

At the end of the initiatory journey through adolescence, the mentor joins the father in accepting the boy as a man. In saying “mentor” we don’t necessarily mean to say there’s just one. Boys will, hopefully, have three or four intimate mentors, supervisors, adolescent guides. These guides will be a part of their lives for months at least, and even years, long enough for intense attachment to occur. And by talking about mentors and fathers together we are not saying mentors and fathers have to agree on what’s best for the boy. They’ll have different visions of the boy. They must, however, agree on basic spiritual values—what’s important in life, why the boy is on this planet, how he should treat others. Mentors and fathers, especially in our culture, in which boys often meet mentors in college, away from dad, don’t necessarily accept the boy into manhood simultaneously, or in each other’s presence. Hopefully, each does so on his own, in a way that reflects for the boy the cohesiveness of healthy male community.

When Jack comes home with his seeds, his mother has a very normal reaction—anger! She gave Jack responsibility and he appears to have failed. Should we interpret this as mom being stultifying and unable to see magic? Don’t sell her short. She is doing her job—her primary responsibility is to feed her son. It is not her primary responsibility to initiate him into manhood.  She punishes him, but, simultaneously makes his journey possible by throwing his beans out the window.

Brian J. Doyle | We Did
Dan Kindlon and Michael Thompson | What Boys Need