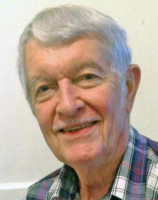 Don Noel | Behind the mutiny

The official account, by Nordhoff and Hall, would have you believe Fletcher Christian intended from the outset to lead his crew to molder away on a remote South Pacific island. In fact, he intended nothing less than a takeover of the Royal Navy and an ethnic re-population of the British Isles, rescuing them from what he deemed an alien intrusion of Celts and Scandinavians, Teutons and the wretched remnants of […]