Don Noel | Behind the mutiny

The official account, by Nordhoff and Hall, would have you believe Fletcher Christian intended from the outset to lead his crew to molder away on a remote South Pacific island.

In fact, he intended nothing less than a takeover of the Royal Navy and an ethnic re-population of the British Isles, rescuing them from what he deemed an alien intrusion of Celts and Scandinavians, Teutons and the wretched remnants of Roman expansion into France and the half-Muslim Iberia, all illegal immigrants of slovenly habit and limited ability.

Most of the crew of the H.M.S. Bounty were progeny of such intruders, of course. No matter; Christian judged that the infusion of fresh blood he planned – golden-skinned, well-proportioned, bright and willing – would suffice to turn the tide.

His demise on forlorn Pitcairn Island was arguably a well-deserved sentence for ambition gone monstrously astray. Perhaps so, but that was hardly part of his original plan.

And the men who joined him in one of history’s great insurrections? Some of them knew within weeks that they had joined a narcissistic leader whose self-esteem far exceeded his ability. One of them, a seaman named Adam Johnson, would live to reflect, decades later, that no one among the early doubters had the courage to topple the head toppler. In time, the disillusioned became a clear majority. Few wanted to admit error, however. Opportunities were even scarcer, and most of the damage had by then been done.

The Bounty, you will recall, was fitted out as a warship, with a crew trained for battle under sail. It was in Tahiti, a French outpost, on a mission not far removed from colonial conquest: collecting breadfruit and other Pacific flora, meant to be taken halfway around the world to diversify the agricultural output of the British Empire. Their stay in Papeete was longer than expected while waiting for the seedlings to be strong enough to survive transit to Jamaica.

Few of the crew – their military pride and prowess hopelessly entangled in the arms of Polynesian women – initially saw anything shameful in decks made hard to maneuver and gunports made inoperable by a burgeoning forest of tropical vegetation.

Fletcher Christian, the master’s mate, set out to persuade them otherwise. Their noble calling had been compromised, he argued, by an aging captain who no longer had the courage or stamina for military conquest, so had acquiesced in making his proud brig into a garden cart. “We must make the Bounty great again!” he exhorted: William Bligh had to be overthrown.

Bligh, like any of his majesty’s captains, had imposed discipline on his crew with generous use of the cat-o’-nine-tails. He had few defenders among the rank and file.

Still, mutiny was not immediately even whispered. Christian’s first goal was to identify those susceptible to the argument that they should restore the proud traditions of the Royal Navy. Such men, once transformed into malcontents and persuaded that new leadership would bring a bright future, could be counted on to mutter among their shipmates and recruit more adherents, spreading the contagion.

The clincher, for many, was the widely-held ambition to bring their native wenches home to England. Bligh had already ordered stern punishment for a few who brought a wahine on board the Bounty for a single night’s frolic in the foc’sle; he would obviously not tolerate carrying the Tahitian women halfway around the world.

Christian, whenever not on watch, spent nights ashore with his own woman. He thought an infusion of Polynesian genes was the best hope to ennoble the people of England. Starting with the riff-raff who were the Bounty’s crew, he hoped within a few generations to populate England with a new, warm-skinned race whose beauty and ability would overcome the sorry legacy of pallid European illegal immigrants.

When the moment of revolt came, Christian was prepared to sail far enough offshore that Bligh and his loyalists would walk the plank into shark-infested waters. A man convinced that his own instincts were sharper and sounder that anyone else’s, he rarely accepted advice. Still, it soon became clear that a significant majority of his would-be crew were prepared to be mutineers but not murderers.

Christian would need a full complement of sailors to manage the ship. He decided to win the devoted allegiance of the recalcitrants by giving Bligh a flyspeck chance at survival. He shared only with his journal the thought that a speedy death would be more charitable than starvation in an open boat. In any case, he thought leaving Bligh adrift instead of feeding him to the sharks would make only a few weeks’ difference in the outcome.

So it was done. Bligh was given a longboat with meager provisions of hardtack and water. He was joined by most of his officers and a few salts – including, it turned out, every man on the Bounty with any navigational skill. They had sails and a few pairs of oars. The insurgents could console their consciences that they had not condemned their former captain to certain death.

As a matter of strategy, Fletcher Christian needed them dead. He intended to sail the Bounty back to England with an elaborate tale of storms and hostile islanders to explain the absence of Bligh and his loyalists. As originally planned, he would go by way of the Caribbean, but rather than giving away the breadfruit – which were property of the Crown — would contrive the sell the nourishing plants to the colonial masters of Jamaica and the Leeward Islands, so that he and his sailors could arrive home relatively wealthy.

His forebears had engaged in commerce, he said, and he was instinctively a master of such deals.

Had he succeeded in reaching England, he would have been hanged. Bligh, a master navigator, managed to sail more than 3,000 miles west to Australia, where his nearly-starved lifeboat crew regained strength and found passage home. A small armada then set out looking for Fletcher Christian and the Bounty.

Christian, meanwhile, gathered up his mutineers and their women and started – he thought – eastward across the vast Pacific, intending to stop at Easter Island for fresh water halfway to rounding the foot of South America at Tierra del Fuego.

In a matter of weeks, everyone on board feared they would miss that tiny target in the vast Pacific. Some of their precious fresh water had to be committed to the breadfruit, so drinking water was becoming scarce. There was muttering, below decks, of a fresh mutiny, but no one had the charisma or chutzpah to seize command from Fletcher Christian.

They were all relieved one morning to see shorebirds in the air, and their leader was astute enough to set his course after them until the avians’ home island became visible on the horizon – Easter Island, he thought.

Wretched navigator that he was, he had brought the Bounty only halfway to that stopover target. They had stumbled into Pitcairn, which didn’t even show on most maps. It proved to have a narrow inlet into a sheltered harbor, and enough green vegetation to announce the presence of ample fresh water.

They anchored, and Christian sent the crew ashore in lifeboat convoys, leaving him and a corporal’s guard on board. While the men scavenged inland and found water, their Tahitian brides took over to fashion rudimentary shelters, contrived to catch enough fish in the harbor, and began cooking dinner. At Christian’s command, the men rowed back and forth bringing the breadfruit ashore, planning to water the plants well before going farther.

That chore once accomplished, the men on shore held council and decided it was time to oust a leader whose ineptitudes had become apparent. With the help of the women, they would find their way back to Tahiti and settle there.

Christian heard them coming after dark had fallen, and overheard enough of their whispers, as they came aboard, to divine their purpose. Knowing he could not resist them, he chose the only course open: He made his way below decks, set a series of fires in the hold, clambered back up and swam ashore as the Bounty became a flaming torch and then sank into the bay.

The British never found the crew at Pitcairn; even from a few miles away it betrayed no sign of inhabitance. The remnants and descendants of the Bounty mutineers were not found until the next century, when a passing ship chanced to see a wisp of smoke and sent a search party.

There was by then a growing population of the children and grandchildren of the mutineers; their common language was that of the Tahiitian wives, Reo Mā’ohi, although a few spoke a few words of English. Only two of Bligh’s original crew were still alive, and only one of them, Adam Johnson, was still conversant enough in English to tell what had happened.

They had endured several years of malnutrition, he related, living mostly on fish and what little edible vegetation their wives could find. Finally, the breadfruit – as valuable a crop as had been hoped back in London — began to bear, and life became tenable, although never comfortable. All were eager to be given passage back to more hospitable islands.

Fletcher Christian had been tried, found guilty, and hanged.

Guilty of what? the rescuers asked.

“Of ineptitude, sir,” Adam Johnson told them. “He was a skillful talker, as glib as a real estate salesman. He persuaded us that Captain Bligh was inept and against our best interests. In time we realized that there was little skill behind all the bombast and rhetoric, but by then it was too late.” 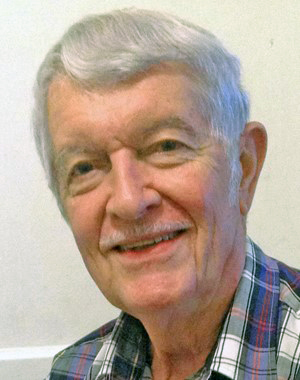 Retired after four decades of prize-winning print and broadcast journalism in Hartford CT, Don Noel received his MFA in creative writing from Fairfield University in 2013. He has since published more than four dozen short stories and non-fiction pieces and has two novellas and a novel still looking for publishers.