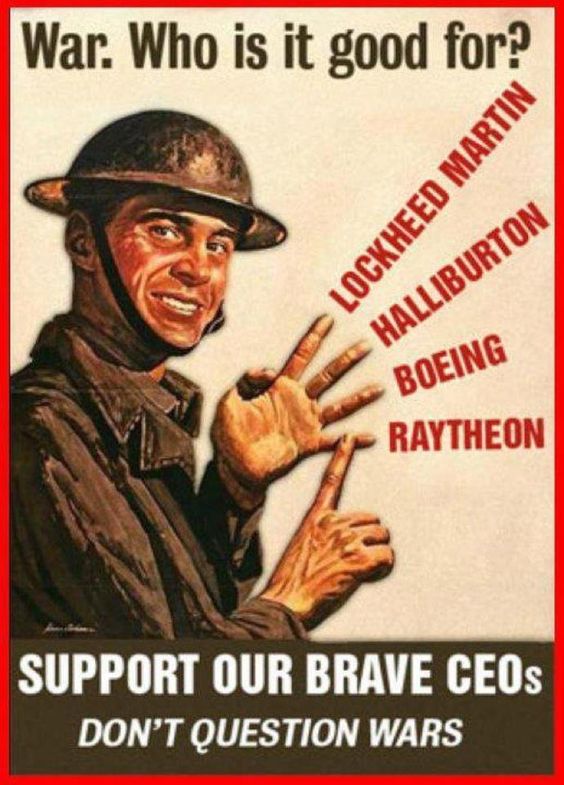 “Every gun that is made, every warship launched, every rocket fired signifies, in the final sense, a theft from those who hunger and are not fed, those who are cold and are not clothed. This world in arms is not spending money alone. It is spending the sweat of its laborers, the genius of its scientists, the hopes of its children. The cost of one modern heavy bomber is this: a modern brick school in more than 30 cities. It is two electric power plants, each serving a town of 60,000 population. It is two fine, fully equipped hospitals. It is some fifty miles of concrete pavement. We pay for a single fighter with a half-million bushels of wheat. We pay for a single destroyer with new homes that could have housed more than 8,000 people. . . . This is not a way of life at all, in any true sense. Under the cloud of threatening war, it is humanity hanging from a cross of iron.” — President Dwight D. Eisenhower

“The Earth should not be cut up into hundreds of different sections, each inhabited by a self-defined segment of humanity that considers its own welfare and its own ‘national security’ to be paramount above all other consideration.

“The Earth faces environmental problems right now that threaten the imminent destruction of civilization and the end of the planet as a livable world. Humanity cannot afford to waste its financial and emotional resources on endless, meaningless quarrels between each group and all others. there must be a sense of globalism in which the world unites to solve the real problems that face all groups alike.

“Can that be done? The question is equivalent to: Can humanity survive?

“Every ambitious would-be empire, clarions it abroad that she is conquering the world to bring it peace, security and freedom, and is sacrificing her sons only for the most noble and humanitarian purposes. That is a lie, and it is an ancient lie, yet generations still rise and believe it.” — Henry David Thoreau

“Christians should put survival of the planet ahead of national security. If we want to be real peace-makers, national security cannot be our primary concern….Our primary concern should be survival of humanity, the survival of the planet, and the health of all people. Whether we are Russians, Iraqis, Ethiopians, or North Americans, we belong to the same human family that God loves. And we have to start taking some risks—not just individually, but risks of a more global quality, risks to let other people develop their own independence, risks to share our wealth with others and invite refugees to our country, risks to offer sanctuary—because we are people of God.” — Henri J.M. Nouwen

“It is the oldest ironies that are still the most satisfying: man, when preparing for bloody war, will orate loudly and most eloquently in the name of peace. This dichotomy is not an invention of the twentieth century, yet it is in this century that the most striking examples of the phenomena have appeared. Never before has man pursued global harmony more vocally while amassing stockpiles of weapons so devastating in their effect. The First World War, we were told, was The War to End All Wars. The development of the atomic bomb is the Weapon to End Wars.

“Preventable diseases, accidents, suicides, falls, drowning, and hot weather kill many more people in the United States and most other nations than does terrorism. If terrorism makes it necessary to invest $1 trillion a year in war preparations, what does hot weather make it necessary to do?” – David Swanson

“Nobody ever beat the Nazi out of me. It wasn’t violence and hate that led me from the movement. It was people who were very brave, who were able to respond to my hatred with kindness and with compassion.” – Arno Michaelis

“We need to live with nation-states. But my ultimate allegiance is not to any nation-state. It’s to truth and justice.” – Cornel West

“Right now you are in a profound transitional energy and you are in a struggle with basic light and dark. You know this. Some say, ‘Kryon, you paint a much too simple picture of what is happening.’ Not really. Currently, it’s really basic: Will you choose slavery, horror, control, war, drama and death as your living scenario, or will you choose a consciousness of benevolent compassion and caring for each other?” – Kryon

“The first person who, having enclosed a plot of land, took it into his head to say this is mine and found people simple enough to believe him was the true founder of civil society. What crimes, wars, murders, what miseries and horrors would the human race have been spared, had someone pulled up the stakes or filled in the ditch and cried out to his fellow men: ‘Do not listen to this imposter. You are lost if you forget that the fruits of the earth belong to all and the earth to no one!’” – Jean-Jacques Rousseau

“Thomas Jefferson once said: ‘Of course the people don’t want war. But the people can be brought to the bidding of their leader. All you have to do is tell them they’re being attacked and denounce the pacifists for somehow a lack of patriotism and exposing the country to danger. It works the same in any country.’ I think that was Jefferson. Oh wait. That was Hermann Goering. Shoot.” – Jon Stewart

“The good we secure for ourselves is precarious and uncertain until it is secured for all of us and incorporated into our common life.” – Jane Addams

“Peace cannot be kept by force; it can only be achieved by understanding.” – Albert Einstein

“As long as Man continues to be the ruthless destroyer of lower living beings, he will never know health or peace. For as long as men massacre animals, they will kill each other. Indeed, he who sows the seed of murder and pain cannot reap joy and love.” – Pythagoras

“Just 3% of U.S. military spending, or about 1.5% of global military spending, could end starvation on Earth. A little over 1% could end the lack of clean drinking water. If we were to make a serious attempt to address climate destruction, the only place to get the kind of funds needed is from the military, and it would only take a fraction of what’s we spend on the military to put up a serious struggle.” — David Swanson

“In this world there is room for everyone, and the good earth is rich and can provide for everyone. The way of life can be free and beautiful, but we have lost the way. Greed has poisoned men’s souls, has barricaded the world with hate, has goose-stepped us into misery and bloodshed. We have developed speed, but we have shut ourselves in. Machinery that gives abundance has left us in want. Our knowledge has made us cynical; our cleverness, hard and unkind. We think too much and feel too little. More than machinery, we need humanity. More than cleverness, we need kindness and gentleness. Without these qualities, life will be violent and all will be lost. The airplane and the radio have brought us closer together. The very nature of these inventions cries out for the goodness in men; cries out for universal brotherhood; for the unity of us all. Even now my voice is reaching millions throughout the world, millions of despairing men, women, and little children, victims of a system that makes men torture and imprison innocent people. To those who can hear me, I say, do not despair. The misery that is now upon us is but the passing of greed, the bitterness of men who fear the way of human progress. The hate of men will pass, and dictators die, and the power they took from the people will return to the people. And so long as men die, liberty will never perish. Soldiers! Don’t give yourselves to brutes, men who despise you, enslave you; who regiment your lives, tell you what to do, what to think and what to feel! Who drill you, diet you, treat you like cattle, use you as cannon fodder. Don’t give yourselves to these unnatural men – machine men with machine minds and machine hearts! You are not machines, you are not cattle, you are men! You have the love of humanity in your hearts! You don’t hate! Only the unloved hate; the unloved and the unnatural. Soldiers! Don’t fight for slavery! Fight for liberty! In the seventeenth chapter of St. Luke, it is written that the kingdom of God is within man, not one man nor a group of men, but in all men! In you! You, the people, have the power, the power to create machines, the power to create happiness! You, the people, have the power to make this life free and beautiful, to make this life a wonderful adventure. Then in the name of democracy, let us use that power. Let us all unite. Let us fight for a new world, a decent world that will give men a chance to work, that will give youth a future and old age a security. By the promise of these things, brutes have risen to power. But they lie! They do not fulfill that promise. They never will! Dictators free themselves but they enslave the people. Now let us fight to fulfill that promise. Let us fight to free the world! To do away with national barriers! To do away with greed, with hate and intolerance! Let us fight for a world of reason, a world where science and progress will lead to all men’s happiness. Soldiers, in the name of democracy, let us all unite!” – Charlie Chaplin