Steve Price | Where the moon gets its light 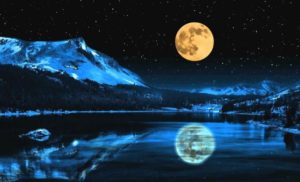 Long ago when the Earth was young and not quite old, the Creator of all things set about the task of creating the universe. He created Sun and gave him his fire, for Sun is the life force for all living things. He keeps the Earth warm and commands the day. The Creator then formed the stars in the heavens to tell the seasons and the future. They have a fire too, but their fire doesn’t burn as hot as the sun’s, for if it did there would be too much heat and the Earth would perish.

The Creator placed the Earth between the Sun and the Moon for them to watch over and keep safe. “Sun, you must keep watch over your sister Earth by day, and Moon, you must watch over her at night while your brother rests,” the Creator said. So each night, Moon stayed with her sister until sun returned the next morning.

“How can I watch over earth when I have no light to see by?” she asked her friend, a little mouse who lived in a great oak. “The only light is from the stars and it is dim,” Moon said sadly. “Why don’t you ask your brother for some light? Maybe he will give you some,” said the little mouse. “What a wonderful idea. I will go now and ask him,” said Moon. So Moon called to her brother Sun,” Sun, my brother! Give me some of your fire so I may have light to see Earth with at night!” But Sun was angry that Moon had asked this of him. “No! I cannot do that! The fire would be too much for Earth to bear and all life would die! The Creator would be angry with me!” Sun was so angry he turned his face from Moon.

Moon’s heart was broken that she had angered her brother, whom she loved very much. “Little mouse, I have angered my brother! I fear to go to the Creator for he may think me selfish to want fire. What can I do?” Then the wise oak that the little mouse lived in spoke, “Moon, the Creator is wise and good, slow to anger. Go and speak to him on this matter.”

Moon traveled to the home of the Creator, “My Lord, I must ask something of you but please do not be angry with me,” she said, her voice trembling.

“Moon, do not be afraid of me! Ask whatever you need,” the Creator said.

“My Lord I cannot look upon the Earth at night for there is no light for me to see by. Please tell my brother Sun to give me of his fire that I may be able to see the Earth as I pass her at night.” The Creator thought upon this for a moment. “Moon, if Sun gave you of his fire to see by, the heat from each of you would scorch the Earth and all life would perish,” the Creator said. Moon was very sad. She wanted to see the Earth but she didn’t want to kill everything to do it.

“I will give Moon some of my fire,” a distant voice said.

“Who said that?” asked the Creator.

Moon was happy, “May I go and get fire from the morning star, my lord?” Moon asked.

“It is a long journey you will be gone from the earth for seven days,” the Creator said. “Who will watch over the Earth while you are gone?”

Moon thought for a moment and then answered, “My friend the mouse will watch over Earth for seven days while I am gone. He shall have my strength and life!”

So, Creator fashioned four torches for Moon from great cedar trees that grew on the high mountains. Moon flew to the morning star and lit the torches. When Moon returned, she let the torches burn bright filling the night with her light. But the animals and people could not rest because of the brightness of the moon. Soon every living thing grew tired from lack of sleep. The night creatures grew hungry because they did not know when to come out and eat; the Earth never got dark. The world fell into sadness; the people no longer danced or sang for they were tired.

“Oh mouse what must I do?” Moon asked, as her tears fell to Earth as diamonds.

“Turn your back to the Earth for a time, and then turn ever so slowly till your torches begin to light the world. Once you face the earth in fullness, begin to turn away slowly till darkness comes again. This way all creatures will learn to look in happiness for the fire of the moon!” Mouse said.

“Mouse, you are a good friend and very wise I will do this!” Moon said.

So Moon turned her back to the Earth, then very slowly she began to turn back over the days to face her sister. The creatures of the day lay down to sleep, the night creatures came out to play and the people were happy once more.

So that’s how the Moon got its light and, as she turns ever so slowly, letting the light from her torches shine, you see her in stages, thanks to the wisdom of a wee little mouse!

Descended from a Cherokee medicine woman, Steve Price lives on a small homestead near the town of Tignall, Georgia, with two cats, a blue-eyed horse named Libby, and a very lazy dog named Buster. His days are spent enjoying the quiet of nature and letting his imagination find the stories that exist all around him in the wild. Contact him at p.steve35@yahoo.com.

How mighty is the MOON