Shame and/or humiliation are a driving motivation in hundreds of revenge movies—from horror flicks like Carrie to dramas like The Help. Shame was also on display in last year’s Oscar-nominated Manchester By the Sea, about a young man whose drunken carelessness results in the death of his children, and the appropriately named 2011 movie, Shame, about a sex-addicted man whose encounters bring no intimacy or pleasure, only physical release, followed by shame.

There also have  been many films about shameful chapters in our own—and others’—collective past. Hopefully you will have seen those that have been major studio releases, such as 12 Years a Slave, the 2013 Oscar-winning film for best picture by director Steve McQueen (who also directed Shame); Little Big Man, 1970’s best picture, a Western comedy-drama, about a white boy raised by Cheyenne Indians; and Schindler’s List, the Oscar-winning best picture of 1993, directed by Steven Spielberg, about the Nazi Holocaust. If you haven’t seen them, do. All are highly recommended.

Two movies you might’ve missed, however, that deal with shameful acts we have not collectively acknowledged include: 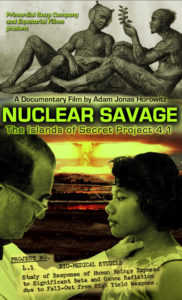 Nuclear Savage: The Islands of Secret Project 4.1 tells the story of how the United States dropped 67 atomic bombs on the Marshall Islands—a Pacific island paradise, once a U.S. military colony—and then used its residents as guinea pigs to study the effects of long-term radiation on human populations.

The film won numerous awards at documentary film festivals from Paris to Mexico City; Auckland to Amsterdam, as well as favorable reviews from the critics. VARIETY wrote, “Assumes the qualities of a detective thriller with massive moral, political, and financial implications. Few will be left unmoved.” The Chicago Tribune said, “The film does a stunning job…An extraordinary documentary,” and Counterpunch wrote, “Poignant, provocative, and deeply troubling.”

It is available for streaming on demand on Vimeo, or purchase from the filmmakers’ website. 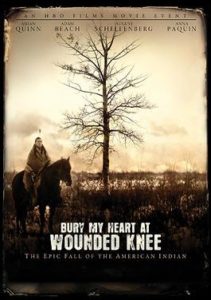 Bury My Heart at Wounded Knee is a 2007 historical drama, produced by HBO Films and directed by Yves Simoneau, adapted from the book of the same name by Dee Brown. The story begins in 1876 with the legendary battle at Little Big Horn, when Sioux and other Indian warriors defeated the U.S. Cavalry under the command of General George Custer. The U.S. government’s response to that defeat was a concerted campaign to remove Indians from their ancestral lands, herd them onto reservations, and destroy their culture. By doing so, the government could open the West to white settlers, run the railroad through the Dakotas, and open the Black Hills to gold mining. The campaign leads to the slaughter of the Sioux at Wounded Knee in 1890, where the film ends.

The film is rightly called “harrowing, depressing, and horrific.” We see Indians massacred not only in battle, but sleeping in their villages; given smallpox-infected blankets; deprived of the buffalo—their primary food source; and stripped of their culture, language, spiritual practices, and dignity. It is a shameful chapter in U.S. history that illustrates what the same reviewer called, “the dark forces of greed, bigotry, cruelty, and injustice that have gathered in America’s shadow.” Of course the only way to clear a shadow is to shine a light on it.

The film won six Emmy awards, including Outstanding Made for Television Movie. It is available for streaming or purchase from Amazon and can be rented from Netflix and other online sources.

M. Stone | You’re a woman now
Steve Price | Where the moon gets its light