Quite a few excellent movies on the economy have been released since the crash of 2008. Most have been mainstream releases, which I presume those interested have seen. If not, I recommend, in particular, The Big Short and Inside Job. Both will foment anger and frustration that the financial market behavior that led to the crash has not only gone unpunished, but with rare exceptions, its perpetrators have returned to their old ways. In 2015, Fortune listed both of these films—along with Michael Moore’s Capitalism: A Love Story (below)—among seven that “tell the real story behind the financial crisis.” (The remaining four are Too Big to Fail, Margin Call, Wall Street: Money Never Sleeps, and The Queen of Versailles.) 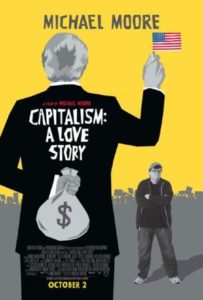 Moore’s 2009 documentary, Capitalism: A Love Story, while not a major studio release, grossed more than double what Inside Job would bring in a year later. The film examines the impact of corporate dominance on the everyday lives of Americans and, by extension, the world. Using Moore’s characteristic blend of humor and outrage, the film asks us to consider the price we pay for our love of capitalism. The media and its pundits tell us that capitalism is “the best, the greatest,” that the only alternative is communism, or its weaker cousin, socialism, but the data reveal just how poorly capitalism is serving the vast majority of us.

Moore begins by reflecting, with his friend Wallace Shawn, the happiness and prosperity capitalism yielded in the early 1950s: “If this was capitalism, I loved it… and so did everyone else,” he says. The top tax rate was 90%, which meant that the country could invest in dams, bridges, schools and hospitals; families could survive on a single income; union families had free healthcare; college tuition was free; most people had little personal debt, and pensions were guaranteed. This prosperity was driven by the manufacturing industry, which benefited from post-war Germany and Japan struggling to recover.

Moore then follows the trail to unravel what went wrong. He identifies President Jimmy Carter’s Crisis of Confidence speech as a turning point, leading to the election of Ronald Reagan in 1980, whom Moore calls a “spokesmodel” for the banks and corporations, who wanted to remake America to serve their interests. He interviews bankers, regulators, senators, congressmen, priests and bishops to trace the dismantling of America’s industrial infrastructure (for short-term gain by companies posting massive profits), and destruction of the unions. Unemployment and productivity increased as wages stagnated, the top tax rate was halved, household debt increased to almost 100% of GDP, bankruptcies and the incarceration rate skyrocketed and sales of anti-depressants and healthcare costs rose. At the same time, the Dow Jones Industrial Average skyrocketed, as did the ratio of CEO pay to that of average workers.

As Moore describes, Americans have paid for our love of capitalism with their jobs, their homes, their health insurance, and savings. Moore interviews ordinary citizens whose lives have been ruined, such as airline pilots whose pay has been cut by as much as 40%, whose pensions have been reduced or eliminated, and who now work exceedingly long hours with no one questioning the effect on safety. Some have taken second jobs, gone on food stamps, or incurred massive debt. None want their children to follow in their footsteps. Moore also interviews the family of a man who worked for Amegy Bank of Texas, which had secretly taken out a life insurance policy on him, naming itself as the beneficiary, and then accidentally wrote to his widow, telling her that they were receiving a $1.5 million payout because he died of cancer. Moore asks how this can be legal when ordinary citizens are prohibited from taking out home insurance on someone else’s property.

Moore doesn’t leave us with a sense of hopelessness, however. He also profiles the Occupy Movement, the 2008 presidential campaign of Barack Obama (who was demonized as a socialist, but turned out to be quite friendly to Wall Street), Wayne County (Michigan) Sheriff Warren Evans, who achieved notoriety for ordering an end to foreclosures; the Miami Low Income Families Fighting Together, who re-occupy foreclosed homes; and workers at Republic Windows and Doors, who organized a sit-down strike after being fired without severance, vacation time, or health care benefits after the company was taken over by Bank of America and JPMorgan Chase. After six days, Bank of America agrees to all their demands.

The film ends with Moore using crime scene tape to mark off Wall Street, suggesting that people living in the richest country on Earth deserve a decent job, healthcare, a good education, and a home of their own. He calls for us to end our abusive love affair with capitalism and replace it with something good for all people—democracy.

In one of the earliest issues of The MOON, on CommUNITY, we profiled two movies that, while celebrating community, also explored economics—specifically, the economics of happiness. Contrary to ubiquitous advertising, these are not at all synonymous with the economics of consumption.

If you haven’t yet seen them, allow us to recommend the following two films: 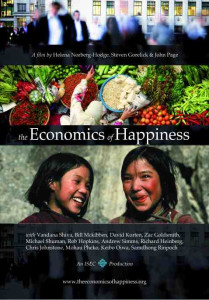 The Economics of Happiness, in which filmmaker Helena Norberg-Hodge examines how—in resistance to globalization—communities are successfully relocalizing their economies, treasuring the rich uniqueness of each local place. The film lauds the development model of Bhutan, for example, which measures progress by increases in Gross National Happiness (GNH), rather than the Western world’s Gross Domestic Product (GDP). Bhutan calculates the happiness index by gains in equitable social development, cultural preservation, conservation of the environment and promotion of good governance.

Thakur Singh Powdyel, Bhutan’s minister of education, who has become one of the most eloquent spokespeople for GNH, says, “It’s easy to mine the land and fish the seas and get rich. Yet we believe you cannot have a prosperous nation in the long run that does not conserve its natural environment or take care of the well-being of its people, which is being borne out by what is happening to the outside world.”

The Bonsai People, a documentary on the work of Muhammad Yunus and Grameen Bank to address the needs of some of the poorest people in the world, the women of Bangladesh. In addition to microcredit—tiny loans that enable women to start their own businesses—the Bank groups women into small communities of entrepreneurs. The women meet regularly to support each other in their fledgling enterprises, solve problems that present themselves, and even cover for each other’s loan repayments so that they all can succeed—a powerful testament to the power of community—and to economics as if people mattered.

capitalism, Economics for a small planet, Sharing the wealth