Here, we have all the bamboo we’ll ever need.
Everyone eats. The millionaires and the least
of us sleep in huts. Everyone, except maybe
the Professor, wastes time planning to escape
paradise.

Even those of us brave and sure as the Skipper
get caught up in the storm of life with little buddies
who, no matter how hard or little they work, bungle
our best of schemes.

We dwell in private lagoons, distracted,
at times, by fortune or women in gold lame
who swish by and wink away their power.
Travelers stranded on this good Earth,
we rise up only so far before we fall.

Before Russell Johnson landed
the Professor gig on Gilligan’s Island
and tinkered with coconut shells
and seawater to charge radio batteries,

his B-24 was shot down
during World War II. He landed
on the Philippine island of Mindanao.
Hard sand broke both ankles. 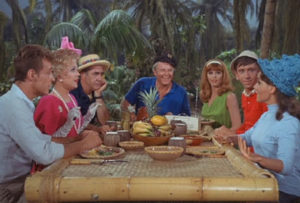 Jennifer Clark has been nominated for the Pushcart Prize five times and once for the Rhysling Award. Her first book of poems, Necessary Clearings, was published by Shabda Press and nominated for a Michigan Notable book and made the Kalamazoo Public Library Staff Picks: Best of 2014. Shabda Press will be releasing her second book of poetry, Johnny Appleseed: The Slice and Times of John Chapman, at the end of this year. She recently co-edited the anthology, Immigration & Justice For Our Neighbors, which was released on April 19th by Celery City Books and has already gone into a second printing. All the proceeds benefit Justice for Our Neighbors in Kalamazoo. Her writings have been published in failbetter, The Windhover, Chicago Literati, Concho River Review, Amsterdam Quarterly, Fiction Fix, Ecotone, Nimrod, and Flyway. When she’s not writing, she’s blogging at Ask Me About My 12,000 Kids for Communities In Schools of Kalamazoo.