Waking Up in Strange Places

I’d been hacking away for two days
on a new story about a girl
with the moon over her shoulder,
the words shooting out like a dream
but the ending wouldn’t come,
it just…wouldn’t.

I grabbed the laptop
and headed to the corner bar
where Ashley poured me a Shocktop
fed me a sandwich, chatted, eventually accepted my bill,
and when she turned to make change,
cut into the neckline of her dress
was a perfect crescent moon,
a lovely little bit of shoulder
and the ending I’d searched my room for,
waking me in the unlikeliest of places
the way women always have.

In the new “Godzilla” movie
there’s a scene where,
after he’s torn thru Honolulu like a nightmare,
FEMA moves in to reconnect lost relatives.
The lead actor approaches a volunteer
hoping to find his wife.

The woman who turned and said:
“we’re doing everything we can sir,”
was my friend, lover and theater producer in 1999.
I didn’t even know she acted. Last time we spoke,
I was helping her write an autobiography
about the daughter she gave up in 1960s
that, miraculously, found her.

By movie’s end
Godzilla defeats the bad guys,
everyone finds their loved ones,
so once again
art can imitate life.

In my neighborhood,
there are three stages of sleep
on Sunday morning:
Alpha, Delta
and iPod.

There is no reward like diving into the sheets
after a long weekend’s work,
curling up with a book
that I’ll find beside me when I wake,
a spent lover for whom I never have to call a cab
or give a ride back to their car
in the morning.

Then there’s the magic hour
the one that saves me hundreds on alarm clocks,
and never lets me miss a beautiful Southern California day –
this is the iPod Hour,
when my neighbor’s hoodie-wearing
pants-dragging, boxer-flaunting son
pops the earbuds from his head once a week,
shoves his player into the iPod dock
turns up the Bose stereo and opens the front door, which
lucky for me, faces my bedroom window.

This Sunday afternoon I woke to Dr. Dre
Yelling “GETTUPP Y’ LAZY RETARD!”
After I showered and dressed,
I stepped onto my stoop
into the California sunshine,
stretched my back and shoulders,
walked past the neighbor’s open door
and quietly thanked him
for not letting me miss this.

Why would Lindberg
dedicate his life and wealth
to fly back over an ocean
that his parents worked so hard to cross
so he could have a better life?

I think I understood it
the morning I packed my car
and set out cross-country from LA,
back to New York and the town
my parents escaped 35 years earlier
just as IBM’s departure left it crumbling
like Tokyo in Godzilla’s wake.

And as I held the wheel steady
I’d occasionally hear a motor
whining louder than my own,
and would look up to see an old bi-plane
leading the way, as the Indians once
believed the eagle knew the road
to safe passage
and better hunting. 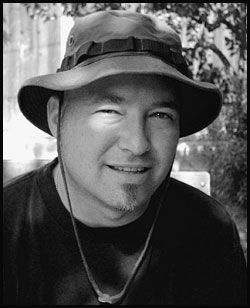