The Impossible Lack of Ability to Comprehend
“Where is the end of it, the soundless wailing…”
— T.S. Eliot, The Four Quartets, The Dry Savages, line 49

I do not know much of God. For what I know
is infinitesimal. For all my arguing and
listening, I know less still. And in stillness
is both the impossible urge to know
and the impossible lack of ability to understand.
It loosens our fingers into soft-spoken awe.
That which cannot be heard
in the immense silence is swallowed echoes.
The question becomes then,
what does God know of me?
I am nothing if not erratic.

I do not know, so I question.
My words depart, and disintegrate.
There are so many protracted misunderstandings,
a listener is already on their haunches.

I do not know when to halt the questioning to listen.
Therefore, I miss the original response.
Everything unravels
into the four quadrants of the universe.

I have no words for this.
I say nothing; and still, it happens.
From everywhere, there is a deepening lamentation,
an unnamable loss, a languishing pang of separation
arising from the final collapse of several species
wrenching into extinction.
There are some animals or plants that died out,
a blimp, never returning or resurrecting,
hurtling towards oblivion in breakneck pace —
there is no sound of their disappearance,
no early warning. Doors just close behind them.

I do not understand this,
this absolute quiet of God,
this silence of the vanishing,
that wailing.
We are interconnected in unimaginable ways.
What happens when the connections disconnect?

The motionlessness continues without notice,
peeling and ripping apart.
This final subtraction multiplies exponentially,
adding to the breakdown,
until nothing holds together.

Loosestrife has reddish-purple tail-like flowers.
Some say, it is an evasive weed; some say, transplant it.
This is the way of all things, both good and bad, like
approaching thunder does not always bring tormented rain.
Everything is spread out, or shrunk in time by time.

I do not know God.
What I know is infinitesimal.
The space between cannot be measured or intellectualized.
What I know is felt, unexplainable, and re-occurring
finding the edges of emptiness.

Numbness comes over me. Exactness eludes me.
If I try to convey God’s message, it dissolves.
If I try to reconstruct it, I find inferior material within me.
When I proclaim I had a personal relationship,
no one believes me. What I know of God remains a secret.

I have no choice. None at all.
I have to consider the most loving thing I can do:
holding the world in prayer.
But is this enough? Is it all I can do?
The weeping comes from everywhere
as intense hummingbird-whirs of grief.
Forgive me if my prayers are lacking; it is all I know.

Forgive me. I do not know what to do.
I am so inconsequential. My restless failures are many.
I wish I knew the simplest way to pray so that God listens
and responds, and the emptying ends.

Why I Left On a Winter Day
Snow at Louveciennes, by Albert Sisley

Winter has been especially hard on my knees.
A good walk seemed like the best remedy.
I have been hurling darkness out of my house,
now it was time to see what survives,
what was good for keeping, what has been sorted,
what has been taken like so many things,

Winter has been hard on the earth.
There were days when the sun just had no ambition.
Blue puffs of breath went into the halo sun.
You could not find something in the struggling light.

Winter has been hard on the wooden stakes.
Snow remains on red roofs like hats.
Air tingles against my face of hiddenness.
There is nothing to see in the snow.
It is shuttering everything out: stillness;
noise; chill; chimney smoke of snowflakes.

Winter can be as hard as it wants.
I know it will be followed by intense worsening,
like my landlord kicking me out
in the dead of winter.
All I have is an umbrella, a blank face,
and a destination into nowhere
where things are always waiting.

What is there? What is there in the darkness?
I learn shapes all over again.
Not everything is familiar in the loss.

Once I had light; and now it is gone. Objects are not
braille. If they shift or move, nothing is clear.
Even stillness is confusing: Is this thing alive?

What good is finger-spelling to the blind?
I know the dark weather is approaching.
I know the rasp of the unlocked door.

I know silence in pincushions of light.
Everything breaks down into simplest forms,
into the vaguest of impressions —

and isn’t that what you live by, anyway,
impressions of what you think you know?
How is darkness different from anything else? 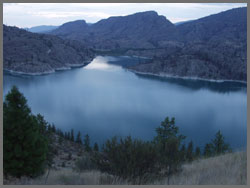