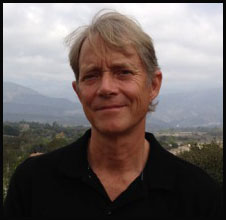 RECENTLY I WENT DOWN TO SOUTHERN CALIFORNIA to see my old friend James, who is ninety. He says his legs are getting weak. He doesn’t see or hear well any more. During the visit I had to help him with the door because he couldn’t see the black door handle, and his hearing aid, when he used it, often gave off a faint whistling sound. When I called him to say I was in town to visit, it took a moment or so before he understood who was calling, and when I arrived at his door I could see that he had changed a lot.

When I first encountered the man he was eighty years old, and I was in my mid-twenties. I had come to rest in the Ojai Valley and was staying in an attic apartment in the home of an elderly Dutch woman, famous for taking in travelers. The home was in a neighborhood called Taormina, a community for retired Theosophists just downhill from Krotona, the School of Wisdom. My window opened out onto horse pastures and an old oak grove. James was my next-door neighbor.

On warm days I used to go out and sit in the yard. James would come over and talk to me. I’d wave at him and he’d amble over. We’d comment on the day and any news about the neighborhood. Stretches of silence were perfectly comfortable. At some point though, and it has happened in everyconversation I’ve ever had with him, something would shift. He’d peer at me through his glasses, and he would begin to speak about what the Tibetan Buddhists call “the Wisdom Teachings.” For as many years as I’d been alive he had been studying and practicing these teachings.

The Void! Emptiness! Non-dual! No-self! James introduced me to those terms. I was at that time devotedly attached to a rather particular version of myself, so I was not entirely comfortable with notions designed to undermine those attachments. Often when he was done speaking I would actually feel a little bit ill. But I knew something precious was being imparted to me. I sensed it was a rare opportunity, so I simply listened while he spoke.

He’d get into the drama of it. He’d move in close and whisper meaningfully, or he’d wave his arms around to illustrate a point. He’d laugh at the end and call himself the old ham. It worked though. My body felt the message come across. In shamanic terms I’d say he put the teaching inside of me where it has stayed and worked ever since.

The recent visit was my first in several years. I’d heard he’d moved on from the Wisdom to the Perfection Teachings (the most esoteric of all Buddhist teachings). As he came to the door his appearance was very different—the form definitely fading, the presence somehow purer. The sense of welcome was warm and strong as he invited me in.

He was making bean soup. I sat down at the table. James asked if I wanted tea. His wife was out. The home was as always—simple, clean, compact yet spacious, with kitchen, dining and living room all in one. Tibetan wall hangings and ritual tools were integrated with the ordinary objects of American suburban life.

From the stove James asked me what I was up to these days. I told him I was teaching a consciousness class at the university. I had to repeat it—slower, louder and very clearly. I said I was actually teaching the “old wisdom” stuff at Sonoma State University.

He said, “Are they getting it?”