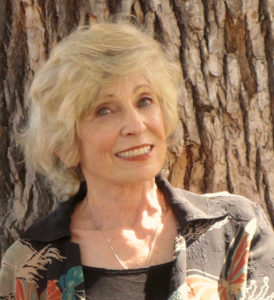 Judith Simon Prager, PhD, is a therapist, author, and teacher who trains first responders and medical personnel around the world in Verbal First Aid, the protocol she and colleague Judith Acosta, LISW, developed to create calm, relieve pain, promote healing, and even save lives in emergency situations. She has co-authored several Verbal First Aid books with Acosta, including The Worst Is Over: What to Say When Every Moment Counts, which the International Journal of Emergency Mental Health called “the ‘bible’ for crisis communication.”

In 2017, Prager published a different kind of book, What the Dolphin Said, about her journey to understand the non-verbal communication dolphins use to bring healing, comfort, and indeed, joy, to children and adults with all kinds of disabilities, as well as to able-bodied divers, sailors, surfers, and others who encounter them in the ocean. As she became more familiar with the dolphins and their work with human patients, she became convinced that some of them are trying to convey, not just another form of communication, but an urgent message of empathy and connectedness that they hope we humans will grasp before we destroy ourselves and the planet.

Prager has some experience “tuning in” to the energy and experience of others for the purpose of healing. She says that, in her therapy practice, focused and benign “presence” is often as healing as any words she and her patient might exchange. Prager also uses guided imagery in her work and designed a pilot study for Cedars-Sinai Medical Center’s cardiothoracic surgery unit involving pre-, intra-, and post-surgical guided imagery. She has written about her results with alternative therapy techniques in her memoir, Journey to Alternity: Transformational Healing Through Stories and Metaphors. Together with her husband, Harry Youtt, she has been an award-winning instructor in UCLA Extension’s Writers’ Program since the early 1990s. Her website is www.judithprager.com. – Leslee Goodman

The MOON: Please tell us about your relationship with the dolphin you call Apollo.

Judith Simon Prager: The story really begins earlier than that because for 20 years I have been teaching a protocol called Verbal First Aid to first responders and medical personnel all across the United States. I taught it in China after a terrible earthquake that killed 80,000 people. I taught it in Borneo. I teach it biannually in England at the European School of Osteopathy. I love Verbal First Aid because words can change the outcome of a crisis situation. Adrenaline-charged words or calming words change the chemicals that flow through our bodies. When I first started teaching it, firefighters were saying, “Look, if I have to rescue someone from a burning building, what difference does it matter what I say? It matters what I do!”

But it turns out that the words make a big difference. They affect how a person heals—physiologically and emotionally. A frightened person can start to heal the moment they hear calming words. The words also make a big difference in how they remember a crisis event. The right words can help a person remember the crisis, not as the worst thing that ever happened to them, but perhaps as a time when people came to their aid, or maybe even a time of their own courage. Because of that reframing, they often don’t have to experience post-traumatic stress. That is a stunning outcome. Verbal First Aid is also an important tool for physicians—who get sued most often not for a poor outcome, but when their patients believe they didn’t care.

All of this is by way of saying that I understand and appreciate the power of words. I’m a writer. I’m a poet. I’ve written advertising copy. I even wrote for ABC’s General Hospital. I believe in the power of words. And Verbal First Aid was a perfect use for that power.

But then I started noticing in my therapy practice that there were times when the breakthroughs weren’t a result of the words at all. What mattered in those cases was presence—something that felt like mind-to-mind, or heart-to-heart, communication. I wondered whether maybe there was something like Non-Verbal First Aid that was just as important as Verbal First Aid. I started realizing that there are beings who don’t use words for healing, such as therapy dogs who go to hospitals and lift the spirits of patients, or sit with people who are dying. There are horses in equine-assisted therapy who are very sensitive to children and adults with disabilities. And then I found the dolphins.

Nearly everything that happens in What the Dolphin Said is an accurate representation of my experience to learn more about non-verbal healing communication; however, because it is partially narrated by a dolphin, I am calling it a novel based on true events. The real dolphin, whom I call Apollo in the book (after the god of the sun), the woman who has my experiences, whom I call Selene (the goddess of the Moon), and the head physical therapist, whom I call Matthew, are real characters.

Before I met Apollo, I went down to the Bahamas with a group of cranial sacral physical therapists who involved dolphins as part of their work with adults with a wide variety of ailments. At the termination of those sessions I was allowed to get into the water with the dolphins and one of them, as it seemed to me, “shot me in the heart” with a sonar blast. One of the other physical therapists witnessed it and said in surprise, “What just happened?” At the time it was quite painful, even though I came to believe it also opened my heart chakra, which apparently was the dolphin’s contribution to my education and understanding of their work at a very personal and physical level.

Sometime later I was invited to go down to a dolphin therapy center in the Leeward Antilles and meet the dolphin who is central to my story, Apollo. I felt as if he recognized “the mark” the other dolphin left on me. Perhaps there was something Apollo could read on my heart that told him, “Dolphins have been here.” At any rate, he wouldn’t leave me. He swam back and forth in front of me, one eye fixed upon me at all times, for 20 minutes. He knew I was there for a purpose and he seemed intent upon our fulfilling it. Matthew, his human partner, remarked on it. He said, “That’s so interesting. There’s something between you two.” Our connection was larger than ordinary.

Just before I left Apollo, he lifted the top half of his body out of the water on his tail, looked directly at me and started sending me a volley of squeaks and clicks. I know many marine biologists think the squeaks and clicks are their language, but I believe it’s merely part of the way they communicate—and not the most important part. I tried telling Apollo, “I’m sorry! I’m too stupid! I don’t understand.” But he didn’t care. He kept on communicating, as if he was giving me a download. That turned out to be the last time I saw him.

I just have to tell you that when I decided I wanted to learn about non-verbal first aid, the path that opened up for me was so magical and easy. I would write to people and say, “I’d like to come down and learn from the dolphins.” This is something millions of people want to do—swim with these amazing creatures—so I expected they would say, “Sorry, we’re doing serious work here and we don’t have time for voyeurs.” But instead, everyone said, “Yes. Please come down. We’re starting a new session. We welcome you.” I would come and meet these beings—the dolphins—some of whom, like Apollo, seemed to have been waiting for me.

Then Matthew, Apollo’s human partner, told me about all the ways that the dolphins nonverbally connect with children who can’t speak, or who have other profound disabilities. Their disabilities mean nothing to the dolphins. They go right past the “disability” to connect with these youngsters. There was one young boy who couldn’t talk but could communicate by writing on a board. As I report in the book, this young boy wrote, “Why is it that the dolphins understand us and know what we want and people can’t do that?” Matthew had answered him, “Let me think about it.” The next day, Matthew directed Apollo to move the boy around the lagoon, but the young boy mentally communicated to Apollo, “I want you to hug me.” Apollo ignored Matthew’s instructions and instead gave the boy a hug. The boy wrote a new message that evening: “The impression that dolphins can read what we think I have to confirm. I wanted to cuddle with Apollo but he was given other prompts and he refused them and cuddled with me. Very felt good to be fully understood by another being. But I am deeply disappointed that it’s not working in people.”

What I’m trying to say in this book is that we humans have limited ourselves. We too can communicate as the dolphins do. There are so many times people say, after the fact, “I knew it. I just didn’t act on it,” or “I had a suspicion,” or “I could feel it.” There’s a theory of mind that connects all consciousness, and I believe the dolphins are trying to draw our attention to it. There are ways that we can tap into it, but we have chosen to be limited by three dimensions and our five senses, even though there’s so much more available to us. And how much more wonderful would it be if we could know each other’s minds and hearts? If we could commune with others across distances, or differences in language or ability, and know that we are united in a kind of oneness? When I watched the dolphins demonstrate this, and when it seemed that Apollo was so emphatic about telling me this, I felt like I could do no less than write it all down and give voice to him.

The MOON: In your book, you share a very intimate understanding of what is happening inside Apollo’s thought processes. Can you describe how you received this communication?