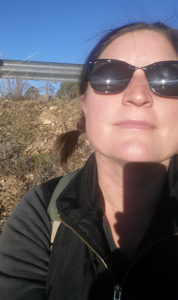 These words always brought a smile of pride to my face. More so if my mother had a note of disdain in her voice when she said it.

Good, I would think, because I want to be nothing like you.

Aunt Dani did not live near us. She was nomadic. Letters and postcards were delivered to our mailbox from all sorts of interesting cities from all over the country. Places I would go to a map and find. I’d point to her location with one hand, and point to where I was with the other. The space in-between always seemed to bring mystery and intrigue. Interestingly, as an adult, it was these in-between places I would travel to, as if needing to fill in the gaps, making sure to explore everything we possibly could. I remember one day my father uttering a very distinct “huh” — a postcard from his sister had arrived from Costa Rica where she was doing research for her dissertation. No one had a clue she had even left the country, much less gone back to school.

I have a collection, snippets really, of words I overheard when the adults thought I was focused on Sunday morning cartoons, or involved in a patch of grass looking for four-leaf clovers. Adults. As if a seven-year-old can’t multi-task. As I listened to the “boing, boing” of Pepe Le Pew on TV, or furrowed my brow in search of something lucky in the clover patch, magical phrases would float into my ears…

“Why can’t she just settle down and get married…”

“Too smart for her own good…”

“Who does she think she is?”

I would feel a spark in my gut that would catch fire and zip through my bones, along meandering veins, and zip out of fingers and toes so they tingled, like it did when I touched the cow pasture fence next door. I didn’t really know her, but I wanted to be her.

My mother was a professional when it came to snarky comments. She’d whine to my father about how Aunt Dani had responded to something she had said over a phone conversation: “She just thinks I’m a ditzy blonde.” You are, I would say to myself. My mother—a bizarre creature. I often dreamed about being adopted, which was ridiculous because even now when I look in the mirror I see pieces of my parents, complete strangers, who seem to still make me who I am no matter how hard I try to be someone separate. Someone different. Someone like Aunt Dani.

I only remember meeting Aunt Dani twice. I do not remember what she looked like, but I remember the turquoise jewelry. Always a bizarre combination of various stone rings, bracelets that jingled, earrings that swayed and seemed to catch in her long black hair, and necklaces that never matched but always looked like they belonged to each other. She once came to visit after spending time with one of our Cherokee elders who was a healer. She wanted to perform an energy healing on me. My mother rolled her eyes from around the corner while I happily laid on Aunt Dani’s self-folding table as she furiously rubbed her hands together and hovered them over my body, stopping to re-rub and re-warm her hands before moving to other areas. I still remember the warmth and relaxation taking over my body, but whether she had actual healing powers or it was purely the magic of simply being together—I don’t know. Her hands above me, hovering, trying to feel my pain, trying to heal me…I remember this more clearly than any memory involving my mother. The person who bore me, nursed me—that person held no sway over me. My mother always felt like an empty person.

My Aunt Dani wasn’t a person. She was a force.

My father never talked about being Cherokee and Chippewa. Not. One. Word.

Coming home in his military fatigues and short hair it was almost easy to miss. Yet, if one looked close enough, the broad nose and the slight Overhill dialect that spilled into his slow sing-song speech patterns told me he was different. Perhaps that meant I was different too. I would braid my long hair into braids, squinting and staring into the mirror while looking at cartoon images of Pocahontas trying to see how much I looked like her, the only person other than my Aunt Dani I was told I resembled.

I never asked my father about being Cherokee and Chippewa. His personality did not invite questions. The liquor got to him when I was young. He drove drunk with me in the car, laughing when I said he was in the wrong lane. “There are four lanes you silly kid…” when there had only been two. He chased me down the hallway screaming he’d kill me. He’s been sober 20 years now. And mostly silent for 20 years. His Overhill voice comes out when commenting on a football score. Or about the weather. Nothing more.

I sometimes wished he was still drinking, because perhaps then, when the tongue would be let loose, he’d tell me stories. But I have no stories from him.

Aunt Dani would email me Cherokee books and Chippewa legend stories for my birthday. She wrote on the inside cover tidbits like, “We are Bird Clan.” Or she would fold up a photo of a facsimile from the Dawes Rolls with an ancestor’s name underlined. The old handwriting undecipherable. But underlined, so I knew who I came from.

I only saw Aunt Dani twice in my life. I see her now, however, in everything turquoise. She knew what was important to me even if I didn’t at the time. That is why she did the extensive paperwork to get me officially enrolled as a tribal member. My Aunt Dani did this. Not my Cherokee/Chippewa father nor my German/Lithuanian mother. Aunt Dani wanted me to be a part of something. A part of her. A part of who we were as Indigenous people. Something I am still reaching for.

Christina Hornett grew up in the Midwest happily chasing frogs, climbing trees, and daydreaming. A previous instructor who adores Chaucer and Kerouac, she currently resides in northern Arizona working on a memoir when she is able to tear her nose out of a book or her feet off a hiking trail.

Elizabeth Hoyle | Special delivery
Michael Pilarski | The power of one, amplified over a lifetime