Manifest Destiny this week
is not transcontinental railroads,
rain following the plow,
or buffalo on the prairie without hides.

Manifest Destiny this week
is pipelines under the river
through burial grounds
without free, prior, and informed consent.

Manifest Destiny this week
is not benevolent imperialism,
the yeoman farmer that came and went,
the American dream, the pastoral idyllic.

Manifest Destiny this week
is a Town Hall meeting.
Citizens of a peaceful valley
listening rather than speaking about
inevitable designs for their land.

Wilderness became open range,
open range became gardens of Eden in deserts,
farms became boxes.
The land and those connected to it lost.

Manifest Destiny this week
is not a blonde angel trumpeting
the Fall of the American wilderness as Jericho,
a blonde angel pointing a providential finger toward the Pacific.

Manifest Destiny this week
is deafened ears.
The sign saying:
Thank you for being patient
while we build a better universe
for you.

Manifest destiny this week
is not doctrines of discovery,
treaties by conquest,
conquest by divine appointment.

Manifest Destiny this week
are the gods unembarrassed by riches
explaining to the rest of us how the world works
in terms and tones reserved for children stories.

Manifest Destiny this week
is a story about meaningful consultation
branded upon bodies
implying consent from unknowing silence.

Expediency justifies not asking a question.
Permission takes too long, of course,
and after all that courtesy you might not get the answer
you want or think you deserve.

Manifest Destiny this week
is the same
as
it always was.

The nights used to be ink black
Jupiter and every star
Clothed only by drifting clouds
Now, it is like dusk in the middle of insomniac nights

No need for flashlight or fire
No need for even fear of darkness
The jeweled city glimmers over the ridge
Shouting over the Milky Way. 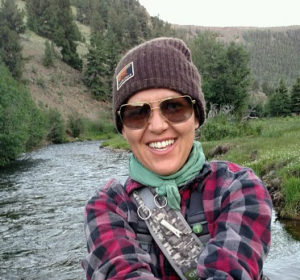 Autumn Bernhardt writes, teaches, and speaks about environmental and social justice.  She was counsel of record in U.S. Supreme Court litigation involving interstate rivers and has been involved in sacred lands litigation on behalf of tribes. Autumn currently teaches interdisciplinary courses related to environmental law, Indian law, civil rights, and persuasive writing. Her work has appeared in Red Rising magazine, the Tulane Journal of Law & Sexuality, and the recently released book Blood, Water, Wind, and Stone.