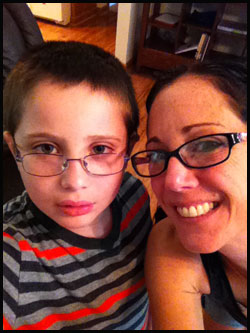 I AM SITTING ON THE TOILET, bent in half, pushing. Oh God let it be over soon, get it out, get it out. My uterus spasms, contracts, retracts, then goes slack. I feel myself wrap around the clot, as if it is attached to my cervix by a string, as if every push causes a pull on a connecting fiber. I just want it to let go and get out.

My OB had said the embryo wouldn’t pass on its own. She had ordered tests to make sure my hCG levels had dropped, to make sure the baby was dead, or in this case, had never formed due to chromosomal abnormalities. “Blighted ovum,” she announced and said by Monday we would know for sure and could schedule a D&C. That was Friday. I didn’t cramp or bleed until Sunday, now Monday morning before dawn.

I call my older sister, Lee, to come over and stay with the kids. I push out a few more clots, but nothing the size of the big one I had passed first, and hobble downstairs. Please don’t let the boys wake up yet. I have to let the dogs out. They pace nervously around me, circling, innocent Springer Spaniel eyes asking for an explanation to my crawling across the kitchen floor. Their collars jingling will wake the boys, whom I cannot take care of right now. “Go pee, go on,” I open the door and they go out to the yard. Screw the leashes. Where is Lee?  I lie on the floor in a ball and wait for her to pull in the driveway. Mom is coming too to take me to the hospital.

“Oh, I should call Thom,” I say maybe aloud, maybe in my head. I am miscarrying what would have been our third child and I have not thought to call him until now. I guess because somewhere inside I know he will not care. By this point, he has lost the capacity to feel anything other than the need for a high. He has been calling in to the emergency room where he works as an R.N. and from where he diverts hospital narcotics to the open mouths of the veins between his toes on his days off, to ask if they need help. Then he lies to me and says he got called in. But I know.

“May I speak with Thom, please?” I say after I finally get through to the ER.

“Hello, this is Thom, may I help you?” His voice is soft. Feminine. I want him. With every ounce of feeling not focused on my contracting uterus, I want him. Please hold me. I’m scared. And he always would. Wake up, Thom, I had a bad dream. And he always did. Where the hell did those days go? Where is he now when I need to be taken care of? Gone. Replaced with a shell. There is no one inside there. Sometimes he still says the right words. Sometimes. But the affect is flat. Nothing rings true anymore unless it is an animated story about work. Those still make me laugh. The one where he and another male nurse speculate on what exaggerated facial expression they would make if a family member came in and found one of them on top of their dead grandmother should not have been funny in the first place, but it was.

“I’m having a miscarriage. My mom is taking me to Grove City hospital. I will probably have to have an emergency D&C.” I didn’t mean “come right away,” or “please help me,” or anything that conveyed the pain and immediate sense of loss I already felt. It was gone. I knew I had flushed it down the toilet. It wasn’t in my uterus and it wasn’t stuck to the disgusting maxi pad I could feel moving around between my legs. That was other stuff. The baby was gone. Baby. Blighted ovum. Whatever it was. Whatever it could have been.

I don’t remember what he said on the phone by the time I am at the hospital. He isn’t there when they wheel my stretcher toward surgery, but I know he will show up later, and I know he will be high. I am thinking of him, my best friend, my husband, the father of my two sons and the bloody mass traveling down the sewer pipes. I am still thinking of him as they insert the sedative into my IV, just before I slip under anesthesia. I wonder if this is the feeling he traded us for. This euphoria. This ohmygod…bliss…I don’t want to go under. I know when I wake I will not feel this way again. Ever. I have the thought that I may never wake up.  Then I slip under. I cease to exist.

It is a year earlier that my younger sister, Ronnie is saying, “Don’t push,” as I look into her eyes and examine her bouffant-style scrub hat. She is working in the OR today, but they let her out of her case to be with me. I had just climbed the side rail of the hospital bed, using my arms to drag my heavy body upward, as if I could escape my lower half to stop the pain.

“He’s coming!” I hear her yell up the hall to the nurse’s station. “She’s pushing!” I hear the fast thump of moving feet, the swishing of gowns.

“Thom, Thom, wake up. It hurts. It fucking hurts,” I say to my husband, who is asleep in the bedside chair. I am desperate. I want the pain gone. I will do anything and right this moment it seems that if I could just wake my husband, the pain will stop. Just one small goal that I have lately been unsuccessful at accomplishing.

Wake Thom has become a sick game at our house. I turn on the bedroom light at 4:00 p.m. after I shut off the alarm that has been screaming every nine minutes since at least 3:00. I slam my hand down on the snooze for immediate relief, then slide the button to OFF. “Get up,” I say. The blinds completely eclipse daylight in our bedroom. He is either ignoring me or he can’t swim to the surface. “Time to Get. Up. Thom.”