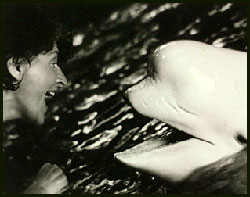 For the past several years I have been exposed to vast amounts of information about whales and dolphins. A network of organizations, such as Save the Whales, Greenpeace, Dolphin Embassy, etc., has formed across the country. People everywhere are interested in what they sense are joyful beings, and they want to know more about them. They come to my husband, John Lilly, for advice and information because he was the first person to propose that dolphins are as intelligent as men, but in a strange and watery way. His conclusions, after twenty years of original scientific work, have reached the public. We are no longer a unique and lonely species. The dolphins too are intelligent. This fact was demonstrated to me in a deeply moving experience at a research institute in San Diego.

We had recently formed the Human/Dolphin Foundation—a new organization to help in our effort to communicate with dolphins. But I was also seeking a more personal participation in the achievement of this goal, which is, to me, the most exciting and important undertaking of our time. Consequently, when we were invited to visit a recently built research institute by its director, Bill Evans, John’s colleague and friend, I felt it might afford me the opportunity I was seeking.

As we passed through the facilities, we were impressed with the youthful vitality exhibited by both humans and dolphins. Bill was excited about the possibilities of educating both, and his enthusiasm was complemented by his vast knowledge about cetaceans. We were nearing the end of our tour when Bill suggested we visit the beluga whales, or “the canaries of the sea,” as the whalers of the last century called them. He led us up a stairway through a large door and down a hallway to the top of an enormous tank. Suddenly, I was looking down at one of the most unusual beings I had ever seen in my life.

The beluga whale looked like Caspar the Friendly Ghost—pure white with a flexible neck and a mobile facial expression.

I had the feeling I was perceiving, and being perceived by, an immense presence. I was simultaneously speechless and trying to absorb a vast amount of information that I was unable to fit into adequate patterns of past experience. It somehow transcended human experience, going deeply into unknown mysteries.

There were a few eternal moments of recognition…the frequency between us was like a brightly lighted tunnel of happiness. Everything else around me dimmed in the white light that soothed and pervaded my very essence.

I vaguely remember walking through the rest of the laboratory.

Before leaving, I asked Bill if I could come back and swim with the whales.

Life went on with a very full schedule, and in the midst of it I often found myself thinking of the whales. But it wasn’t until I talked to my friend, Paul Gaer, that another visit to the belugas became a reality. Paul is a writer and photographer and was intrigued with the adventure I had planned. We are old friends who have shared interests for a long time.

Before I knew it we were on a plane and I was in a dressing room at the institute changing into a wet suit preparatory to my rendezvous with the whales. I slipped into the icy water, feeling I was entering alien territory—their territory. I was afraid and the adrenaline shot through me as I turned uneasily trying to keep the circling whales in my line of vision. The sheer size (about twelve feet and eight hundred pounds) and power of the animals in the water, compared to my small, fragile, and inadequate self were quite sobering. My fear seemed to be sensed and accommodated by the whales, and it soon disappeared when I realized how delicately aware of me my new friends were. I could sense their sonar scanning me. I tried making sounds underwater; they immediately swam within two feet of me and made new sounds. We played for fifteen minutes, with Paul’s camera clicking away in the background. We were interrupted by a crew who came in to do an audiogram, so I had to leave the water. I got out feeling dissatisfied, unfulfilled. What it was I expected, I did not know, but I somehow could not leave just yet. I lingered by the edge of the tank.