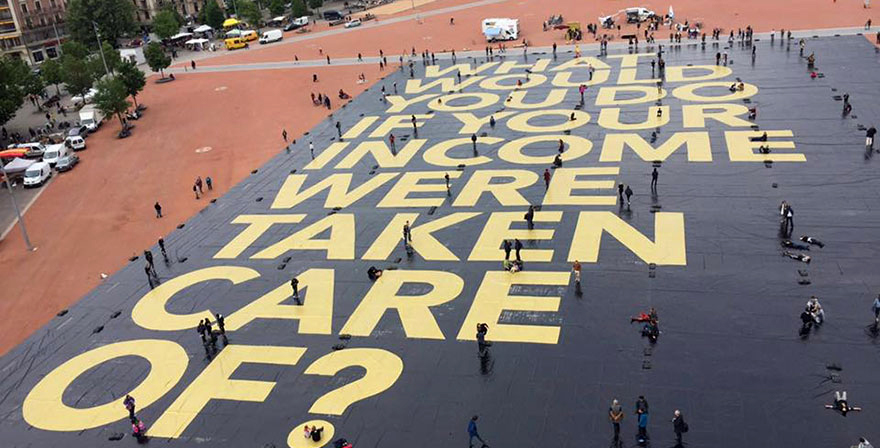 What would you do if you didn’t have to work for a living? Paint? Dance? Take care of your family? Volunteer? Join the Peace Corps? Start a business? Travel?

The current global economic system doesn’t work for most of us. By “doesn’t work,” I mean there aren’t enough jobs to employ everyone at an income sufficient to cover housing, health insurance, debt (including mounting student loans), and retirement. That trend is expected to accelerate as technology replaces ever more workers, from robotic assembly lines to automated toll takers and retail cashiers, to driverless cars and online classrooms.

Even for those fortunate enough to gain fulltime employment, income disparity has become so great that, in 2015, according to Credit Suisse Research Center, 71% of the world’s population held only 3% of global wealth. The world’s wealthiest individuals, those owning over $100,000 in assets, total only 8.1% of the global population but own 84.6% of global wealth. Even more shocking, according to Forbes the world’s 10 richest billionaires own $505 billion in combined wealth, a figure greater than the total annual domestic output of most nations. Capital can move freely about the world, but workers are prevented from doing the same to secure employment. And the emphasis on constant growth—as measured by financial markets, not necessarily by production of goods and services—is on a collision course with the resources of an increasingly overtaxed planet.

But all is not lost. Despite its power and influence, the economy is not a force of nature, but a human construct. We created it; we can change the rules by which it operates: the behavior it rewards; the behavior it prohibits (slavery, child prostitution, using the environment as a free sink for our wastes); and even the activities we call productive. (Caring for our children and elders, for example, while absolutely essential to a healthy society, isn’t counted as “work” if it’s done for love, not money. We could change that.)

Our interview this month is with Dr. Guy Standing, a Cambridge-educated development economist and the author of a series of books describing the precarious situation the economy has created for most of us—members of the new majority class, the precariat—and what we might do about it. One of Dr. Standing’s proposed solutions is an unconditional basic income (UBI) paid to every member of a society. Dr. Standing contributes an excerpt from the preface of his new book to help explain why, while Karl Widerquist, co-founder of the U.S. Basic Income Guarantee Network (USBIG), explores this concept further in “My own private basic income.” We are tremendously honored to also include E.F. Schumacher’s famous essay, Buddhist economics, thanks to the generosity of his widow, Verena Schumacher.

The MOON has two brilliant short stories this month: The Magic of FX, by Thaxson Patterson II, and Basic income in four tales, by C. Spivey.

We also share poetry by one of our favorite contributors, Joe Cottonwood, and newcomers to The MOON, Charles Joseph Albert, Jennifer Clark and Billy Thrasher. PLUS, Movies You Might’ve Missed, two films in their entirety in Gallery, and thought-provoking quotes in MOON Shine.

* The photograph above is from the Basic Income Earth Network (BIEN), an education and advocacy group.