Tim Ward | Why would a man search for the Goddess? 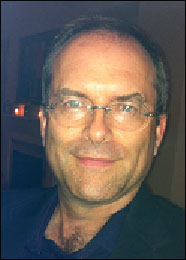 WHY WOULD A MAN SEARCH FOR THE GODDESS? Especially a guy like me?

“Oh, I get it! You’re getting in touch with your feminine side!” my friends say.

No, I have to laugh. It’s just the opposite. It’s the darkest part of my masculinity that yearns for her, like a lost lover, like an orphaned child.  It is as if a ghost touched me on the shoulder and as I turned she disappeared. Her shadow lured me deeper into the unknown than the gods of my fathers ever did. Jesus and Buddha, they urged me away from the world, taught me to resist the ways of the flesh and seek a Kingdom of God, heaven, nirvana, a higher consciousness. It’s different with her. It’s visceral, immediate, a matter of the heart, balls and belly.

I caught my first glimpse of her in India as Kali, the black goddess who is both Mother and Destroyer. Her statues there have four arms. The upper right is raised in blessing; the lower right is extended, palm out, as if offering a gift. But the upper left holds a bloody machete and the lower left a freshly severed human head. I once asked one of her devotees how one could get the blessing and escape the machete.

“No, that’s not the point,” she replied fiercely. “The blessing is only won when you accept both sides of Kali, including pain, sorrow, loss and death. The real death is trying to hold your tiny ego safe from the pain caused by desire and love. Flee from the dangers of life, and you will miss her blessings too. But embrace Kali as she is, kiss her bloody tongue and feel all four arms around you, and then you have life, you have freedom. This, my young friend, is Kali’s boon.”

On the slum streets of Calcutta, Kali’s holy city, littered with human misery and despair, I felt those four arms embrace me once, just for an instant.

When I returned to North America after six years living in Asia, it struck me as strange that we in the West worship only a masculine God. It was not always so. In ancient times, men and women worshiped a pantheon of both gods and goddesses. The Greeks had Aphrodite, Athena, Hera, Demeter, and a host of others. All around the Mediterranean, goddesses appeared as primordial creators, protectors, and powerful forces of nature and fertility right back to the dawn of writing. Thousands of prehistoric statues of women have been unearthed in excavations across Europe back to the Stone Age. Only in the past 1600 years has Western civilization embraced the religion of the Father as the one and only God. Today, many women are experiencing a spiritual rejuvenation by rediscovering the goddesses of the ancient world. But why not men? These were once our goddesses, too. I wondered what we men might have lost when we turned our backs on the feminine divine, and how this has affected us both spiritually and in our relationships with flesh and blood women.

I believe we men have a deep need to connect with women, which for most of us remains profoundly thwarted. This vague feeling that things are out of sync with the opposite sex rumbles around inside of us, mixes with sexual frustration, resentment, anxiety, anger and despair. I felt this even after my encounters with Kali in India convinced me to embrace life passionately. All four of the long-term relationships I had before the age of 35—including one marriage—ended not just badly, but wretchedly. As things got worse, I could feel animosity towards my beloved growing at the very same time I was trying to “work” on the relationship.

“Why does it have to be so hard?” I found myself asking again and again.

How often we liken the woman we love to a goddess, and how often when the illusion shatters, we turn on her and call her a bitch…

It’s all too easy for men to blame women, as if they are the cause of our suffering. Our myths pin it on the first woman: Eve who conned Adam into disobeying God and got them both thrown out of Eden; or Pandora who opened the jar and released all strife and woe. For thousands of years women have borne the brunt of this blame, taken out on them in oppression, abuse, rape, genital mutilation, sexual slavery, forced prostitution, incest, violence, and murder.

One of the toughest parts of writing this book has been facing my own repressed anger towards women, which came to the surface as I confronted images of goddesses from ages past. My true feelings had been camouflaged well. To speak and write about them honestly has been difficult. Was this just me, I wondered, or was I beginning to uncover a larger link between men’s disconnection from the feminine divine and our animosity towards women? Some male readers of my draft manuscript objected to my describing men’s anger towards women in generalized terms. Yet many women readers told me male anger towards women was something too obvious to mention.  Psychologist Dorothy Dinnerstein claims that “the hate, fear, loathing, contempt and greed that men express towards women so pervades the human atmosphere that we breathe them as casually as the city child breathes smog.”[1] She concludes that most of us are so desensitized, we are scarcely aware of it at all.

Before work on this book began, I suppose I too would have rejected the idea I harbored such negative feelings towards women. But in hindsight I can see this animosity in action whenever I have lashed out at an individual woman. We may expunge the biases against women from our laws, change the way we talk, the way we joke, share the household chores, but if we men fail to address this subterranean anger at its root, I believe our desire for intimate connections with women will be thwarted still.

According to Carl Jung, the problem lies in our unconscious. As he put it: “Every man carries within him the eternal image of woman, not the image of this or that particular woman, but a definite feminine image…an imprint or archetype of all the ancestral experiences of the female.”[2] Throughout history these archetypal images found concrete representations in the many faces of the goddess. But with the rise of Christianity, these images have been shorn from western civilization. As a result, Jung says, men’s anima imprints have become stunted in a way that makes a mature connection with women difficult. I think Jung was certainly on to something, connecting goddesses to the anima. But would the revival of ancient goddess archetypes in modern society really make for richer and deeper connections with women? One can hardly look to ancient Greece or modern India as examples of gender harmony. I suspected there was much more to the contemporary problems between men and women then simply the absence of goddesses.

Misogyny’s root runs deep. As I worked on this book, I began to hear its echo everywhere, from the lyrics of contemporary rap music to the world’s oldest story, the Mesopotamian Epic of Gilgamesh, which was first composed somewhere around 2,600 B.C. It recounts the mythic adventures of a historical figure, King Gilgamesh, who ruled Uruk somewhere between 2700-2600 B.C. At the story’s beginning, Gilgamesh has taken to deflowering every virgin and young bride in the city. Sometime later, Ishtar, the goddess of love, approaches the king and offers to marry him.

Gilgamesh asks her, “What would I gain by taking you as wife?”

He hurls back insults.

Just as you loved the lion
And gave him pits to fall in
And the horse whose back
You wounded with the whip…
Your love brings only war!
You are an old fat whore,
That’s all you are,
Who once was beautiful,
Perhaps,
And could deceive
But who has left in men
A memory of grief.
We outgrow our naiveté
In thinking goddesses
return our love…[3]