Terri Jentz | My journey to justice 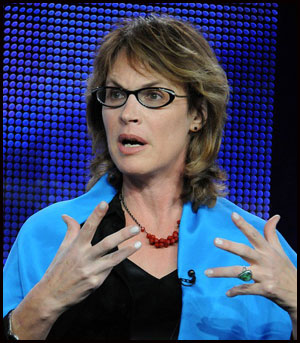 Terri Jentz was a college sophomore in 1977 when she and her roommate decided to complete a cross-country bicycle trip on the TransAmerica Trail, which had been popularized the year before during America’s “Bikecentennial.” Around midnight on the night of June 22, the women were attacked by a man in a pickup truck who drove right over their tent and then got out and started hacking at them with an ax.

Miraculously, Jentz and her roommate survived—but not without scars and trauma.

Fifteen years later, Jentz returned to the scene of the crime to try to come to terms with what had happened to her. She recounts her discoveries in A Strange Piece of Paradise, published by Farrar, Strauss & Giroux in 2006. The book received widespread praise and media coverage. It was a finalist for the 2006 National Book Critics Circle Award, a Los Angeles Times Book Award, and an Edgar Allen Poe Award in mystery writing. Eve Ensler called it “a most astounding work on trauma, on women and violence, on going back to gather yourself, on love.”

I was delighted to learn that Jentz also lives in Ojai. She came over and sat on my front porch for this interview.

The MOON: Tell us what happened to you that night in Cline Falls State Park, Oregon.

Jentz: In 1977, when I was twenty years old and a sophomore at Yale, my roommate and I took off on a cross-country bicycle trip from Oregon to the East Coast—forty-two hundred miles. Seven days into our trip, we pulled off the road to camp in a state park outside of Cline Falls. We were asleep in our little pup tent a truck ran through the middle of our tent, trapping me under the wheels.  I realized that we were being murdered by an ax-wielding maniac. I heard my roommate scream; I heard several blows; and then silence. Our attacker got back into the truck, drove off of me, and got out. I opened my eyes to see this young cowboy standing over me with an ax. As he brought the ax down, I caught it in my hand and said, “Please go away. Take whatever you want, but go away and leave us alone.”

He withdrew the ax, strode away, and peeled off in his truck. I was left there with my dying roommate, whose head had been crushed. I decided I was going to do anything I could to get help. I felt around in our crushed tent for my contacts, put them in with my bloody fingers, and then found my flashlight. I struggled to my feet, ran to my bike, and attempted to ride away to get help—only to realize that all the bones in my upper body were broken, and I could do nothing but wave the flashlight around in bizarre arcs.

At that point I saw headlights coming toward me down the park road. I didn’t know if it was the maniac coming back to finish us off, or if it was someone who could possibly help. I decided I had no choice but to risk it because my friend was dying. I ran out with my flashlight, and it turned out to be two teenagers, who got us to the tiny local hospital, where we were rushed to a bigger hospital, where they saved our lives.

I had a lot of broken bones and a broken psyche. My friend remembered nothing; she had amnesia from the attack, and she was now blind. We both went back—me to Chicago; Shayna to the East Coast. I returned to Yale in the fall; she got a little bit of her eyesight back; and we went our separate ways.

But the impact of the attack lived on. For years I thought I was immortal because I’d survived such a thing; but then all of these fears started to become magnified in my psyche—fear of crime, of cars, of earthquakes. At a certain point, many years later, I realized I was suffering from what people were just beginning to call post-traumatic stress disorder, PTSD. I had almost textbook symptoms: recurring nightmares about the attack, of course. But years later I was still having repetitive dreams that were not nightmares, but I was always twenty; I couldn’t move forward past the age of twenty. Very frustrating. Then I had fears and phobias—small things could elicit a response of utter terror. I’d be crossing the street in Manhattan and suddenly freeze in the path of an oncoming car—classic “deer in the headlights” reaction—because I’d been run over and my body was afraid of being run over again. I had difficulty concentrating. I had energetic swings between manic energy and listless lifelessness. I also came to believe I was marked. I was in the library in Brooklyn one day and a bullet came flying through the window. These were tough days in New York City back then, but still, you wouldn’t expect a bullet to come through the library window…so I believed it was meant for me. I felt I was doomed. That I’d go to the doctor and find out I had some grave diagnosis. I went from feeling I was immortality to feeling that I could die at any moment. It was very debilitating. I bore a resemblance to a battered woman in that sense. I didn’t have the defenses I used to have. My body had been violated and I couldn’t stand up for myself the way I had previously and the way I needed to now—in life, in relationships, in a lot of ways. I wasn’t the extrapolation of the courageous young woman I had been in 1977. I had to go back and find that girl and bring her into the present.

The MOON: Hearing that makes me realize how much more courage your return trip required than I’d originally believed. Because it wasn’t the brave, adventurous girl who had to go back, but the broken, wounded one who couldn’t even stand up for herself in a friendly relationship. How did you make the decision and find the wherewithal to go through with it?

Jentz: I realized that if I wanted to go forward in life I had to go back. I had to confront my fears and reclaim myself. By this time I had left New York City and was living in Los Angeles. I had friends who were encouraging me that it would be a worthwhile thing to do—and I was closer to Oregon now. So finally, in the early 1990s, I decided to launch a trip to Cline Falls, Oregon, to find out what had happened the night of June 22, 1977. In so doing, I thought I might potentially solve the crime—because the perpetrator was never caught—and perhaps more importantly, I might resolve the issue in my psyche, as well.

It became a years-long odyssey that continues to this day. It began with my personal investigation, which led to the book, which then led to the post-book media tour—bringing the story to the public—which then made it part of the public sphere. My investigation also triggered other developments—both for the perpetrator and for the judicial system in Oregon. The statute of limitations on attempted murder was eliminated as a result, and the police were alerted to a dangerous man in their midst, and eventually he was arrested and did time for another crime. Now there’s going to be a movie. I’m just finishing the screenplay after about fifty drafts. My partner is a director, and we’re going out with it, finally, this year 2014.