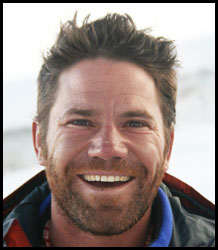 The Clan moved through the undergrowth in a silent wave, tuned so finely to each other’s movements that communication was barely necessary. They were clearly human but glided as effortlessly as a pack of hunting dogs, with a gait that was neither tiptoeing nor running. Not a single crunch of dry leaves or crackle of broken twigs marked the passing of their bare feet. Every minute or so, one of them would stop and cock his head, listening intently to the tales told by an alarm-calling bird, or to mark the prevailing direction of the meager wind. They inhaled shallow breaths through their noses, drawing in scents and odors. The sense of smell is one that most humans have simply forgotten to tune, but remains plenty potent enough to track by when it’s trained. Each Clan member was a boy in his early teens, hair closely cropped, torso sinuous like bunched coils of hemp rope, eyes alert. They took on a loose arrowhead formation. At their apex was a boy of commanding presence, his broad shoulders moving fluidly over his narrow waist, his eyes icy blue like a young wolf cub. He stopped with an abruptness that instantly brought his companions up short, then dropped to his knees to probe the leaf litter. The Clan crowded around him, their movements excited and agitated. The boy called Wolf brushed the leaves aside and revealed a large blocky twist of black dung, as sticky and pungent as newly slick tar. Tiger scat, and it was fresh! The Clan practically yipped and yelped, pleading to be unleashed. Wolf nodded. They splintered, and leapt forward at a sprint.

The one known as Saker ran with an easy loping stride. It was all he could do to keep from yelling with excitement as he chased the invisible story left by the might predator. Saker’s long bow was strapped tightly to his shoulders, but still bounced awkwardly with his biggest leaps, threatening to catch on low branches as he passed. Instead of stopping and stooping below such obstacles, he’d barely break stride, but drop to the ground and bound effortlessly like a macaque dashing between trees. He stopped dead. Ahead in a thicket something was out of place. Light pierced through the trees creating slats of orange and white brightness and black shadow…In such colored light, the striped cat was almost invisible. Almost. Its amber eyes gave it away, staring intently at Saker, watching his every move. Gently, fluidly, trying not to breathe, Saker took the bow from his back. It was an ash longbow, much like medieval marksmen once used, but it was certainly not a primitive tool. Saker knew it could take down a deer at 50 paces, and the tiger was much closer. He notched an arrow into the string and drew the fletches back, the bowstring grazing his cheek. As he pointed the arrowhead at its mark, the tiger hissed with fury, flattened its ears against its head and sprang. The undergrowth yielded a massive form, one which moved with explosive and irresistible power, mouth open, vast canine teeth yellow against the dark of its gullet. Saker didn’t flinch. He unleashed the arrow, and the tiger fell. Heart thumping, Saker released his pent-up breath, leveled his bow with a new arrow already held in trembling fingers, and moved forward cautiously. There is nothing more dangerous than a wounded and cornered predator. He soon saw that there was no danger. The tiger lay on its side, breathing with shallow, fast breaths. The arrow shaft protruded from its chest, and with every heave of its chest, a glug of blood flooded from the entry wound. Its eyes weren’t shut yet, but soon would be. Saker crept closer, drawing his knife to finish the majestic beast off. It needed to be clinical so the coat wouldn’t be damaged. As he knelt, he inhaled the musky, pungent smell of big beast, and the tiger looked up at him with golden eyes. It almost seemed to be pleading, imploring. Saker lifted his knife, then stiffened. There was something else in the bushes. Creeping over the tigress, he moved the brush aside. Before him were two small, mewing cubs, their eyes barely open, shrinking into the cover and trying to make themselves invisible. It was if he had been punched in the chest. Something was very, very wrong. Saker shook his head. They were another prize, part of the contract. He had done well. But no…clouds were clearing in his brain…how could this be right? The animal before him was one of the brethren, a near-sacred beast. He looked down at her heaving flanks. The arrow wound was fatal but it would not be swift. The thought of her suffering was overwhelming. Gritting his teeth, he gripped the handle of his blade and lifted it high.