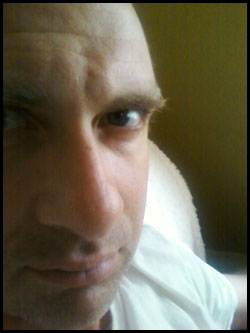 Once within a barren waste a fruitful tree grew tall. Also within the barren waste a hungry elephant slogged. Though perhaps too predictable, it is true: One day they met, these two.

As you might suppose, at first sighting the fruitful tree and its limbs sagged with dripping delights, the hungry elephant shivered in the scorching sun. To raid this tree, he craved, to feast. But he is a famously reflective beast.

“Through all my elephant years I have trudged this desolate land and yet never have I encountered this trove. Countless comrades too and consorts I have haled and yet naught of this tree has been told. Such bigness and heavy succulence would surely be commented here and then. So why have I not heard tale?”

Swaying fro and to, the elephant thought. And then he thought again.

“Not a thing to scare,” so it appeared. “Only the bloating of those treats lades this midday air. Mmmm. Time to moisten fully my cracking lips. Time to wet my dry to the hips.”

And the elephant’s huge forepads hinged forward with a thump. And his nether pads thumped just behind. And he salivated and razzled to a froth as the fruitful tree dazzled his thoughts.

This particular elephant, notoriously deaf among his kind, did not hear the odorless dangers of the fruitful tree. Large, his ears are, certainly, but better evolved for courtship and bluster than discernment. He is not alone, however. Many elephants with keener hearing than his have fed here to their demise. Now it is his turn. This story is sad and full of bad luck, but I’m going to tell it anyway. Here is how it happened.

Once within a barren waste a fruitful tree grew tall. Also within this barren waste a colony of click-ants crawled. Though perhaps too predictable, it is true: One day they met, these two.

A plush green landscape enveloped the tree when initially the click-ants came. But they gnawed and mawed the verdure through until just the tree remained. A council they convened as it became clear that the end of their feasting drew near.

But soon they all agreed that if they were to preserve their livelihood they must make a trap of the tree.

This species of ant has never been known before this tale here writ. Among ants only they are widely described as voracious and carnivorous. And they cannot be shaken from prey, it is said, regardless they never let go. They grip flesh and rip flesh with their vice clicking jaws and clickingly forge to the bone. The other ants call them acrobat ants for these nonpareil feats of holding on, and admire and fear them but as soon as they hear them scurryingly get themselves gone. For acrobat ants will even eat other ants.

In fact, the only thing an acrobat ant will not eat is a swollen delectable, succulent fruit so irresistibly enticing as a sweet piece of loot that it’s known throughout the barren waste as the elephant-killer.