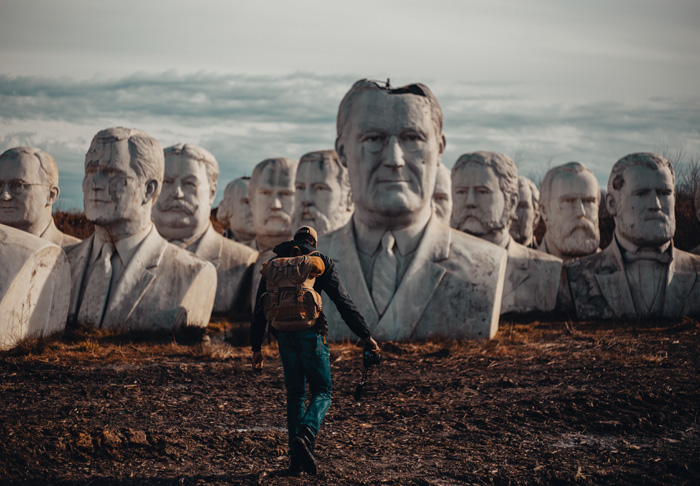 It’s like the French Revolution. One by one, prominent men are wheeled out to the guillotine and dispatched. Of course, the present-day “deaths” are metaphorical. Garrison Keillor is still alive, just out of sight. But “Garrison Keillor,” the charming, folksy, self-deprecating Midwestern humorist, is dead. As is “Harvey Weinstein,” the brash, 1930s-style film mogul. Some of these decapitations are as swift as an ATM transaction. TV journalist Charlie Rose disappeared almost overnight.

I am a Twitter addict. One of the first celebrities I followed was Russell Simmons, the rap mogul. Two or three times a day I’d receive spiritual inspiration from him:

Only do shit you believe in. Period.

Embrace struggle as your greatest teacher.

Every new day offers a chance for us to be reborn.

Now the police are investigating him on rape charges.

No doubt the Internet plays a role in this celebrity purge. The same way collectors of model-train memorabilia can now meet on trainz.com, victims of creepy men can converge. Plus the semi-anonymity of the Web gives women the courage to speak. And if enough accusers come forward — eighty-four in the case of Harvey Weinstein (at last count) — the allegations become difficult to deny.

What will happen to the accused? Al Franken, I’m sure, is writing a book. He’s already written seven of them. (Two weeks before Franken resigned from the Senate, my friend Becky told me she was reading his latest memoir, Al Franken: Giant of the Senate, for political inspiration.) Some of the accused will go to sex rehab. Some are in complete denial. (Most of these are Republicans.)

When will the wave hit rock-and-roll? If nineteen accusers have come out against Donald Trump, shouldn’t there be forty thousand against Led Zeppelin?

One aspect of these symbolic decapitations is strategic, no doubt. Liberals have decided that if they can’t stop Trump from telling thousands of lies, attacking free speech, threatening to blow North Korea off the face of the earth, and giving away $1.5 trillion in taxes to the super-rich, maybe they can indict him for sexual harassment.

Many of the women I know have privately expressed reservations about the swiftness of the purge, but none of the men have. Instead, the guys are sifting through their memory banks in search of their own sexual crimes. One friend told me he’d once had sex with a woman who was unconscious. After a moment he added, “It was consensual. She agreed before she blacked out.”

I have uncovered one memory: I was twenty-two and living in Gainesville, Florida, when a new woman arrived in town. She was German, blond, athletic. I’ll call her Greta. To me she resembled a goddess. Greta must have told me where she lived, because late one night I went to visit her in her attic room. I climbed the stairs and saw her sleeping on a mattress on the floor. I stood over Greta, gazing at her beauty. (She was even lovelier asleep.) After some time I left.

Is that sexual predation? I have no idea, but I feel it was wrong. Thank God I’m not famous enough to be destroyed. This is a great era in which to be obscure.

According to the book of Genesis, the first woman was fashioned by God out of Adam’s rib because Adam was lonely and needed a “helpmeet.” This completely inverts the biological fact that all men are born out of women. In this Bible story, the female doesn’t have an individual identity; she is like an organ of the male, designed to “help” him. But Eve isn’t much help: she disobeys the patriarchal God and eats the tasty forbidden fruit. (Am I being too Freudian in suggesting there could be a sexual metaphor here? All of humanity was cursed with mortality because a woman was flirting with a talking snake?)

The patriarchal order insisted that men must strive always to control women because they’re irrational, emotional, juvenile — though beautiful. In fact, the beauty of women is tied to their irrationality, emotionality, and juvenility. An assertive woman becomes “manly,” unbeautiful. She is either lesbian or a “ball-busting bitch.” These are ideas most men hold, though liberals pretend they don’t. (Conservatives still believe these concepts are handed down by God.)

But the world is changing. The strutting, bullying figure of Donald Trump represents the beginning of the end of male dominance, and he’s bringing the patriarchy crashing down around him.

When men still ruled the world, the individuals we called “manly” were tall, muscular, taciturn, quietly patriotic, and kindhearted. Trump, in his desperation to look masculine, is cruel, petty, and impulsive. During his campaign, his wife, Melania, gave an interview to CNN. The sound bite was: “Sometimes I say I have two boys at home — I have my young son, and I have my husband.”

In the 1950s the roles of women were highly constrained. It was common to call women “girls.” Even women called each other “girls.” The iconic suburban wife existed as an ornament to her husband. She thought about her appearance the way her husband thought about his career.

Now even conservatives call women “women.” Today’s women work. Often they support their families. If a woman never enters a beauty parlor, no one questions this. As “girls” have become women, men have become “boys.” A thirty-two-year-old man who lives in his parents’ basement and plays video games all day is not an anomaly; he’s a cliché. Meanwhile, his sister is probably raising two kids and working a full-time job.

Two years ago, for the first time in history, a woman won the popular vote for president of the United States. She lost the election, however, to a self-confessed sexual predator. The day after Donald Trump’s dispirited inauguration, 750,000 women marched in Washington, D.C. I attended that protest. To stand with this feminine multitude was life-altering. We are seeing the full effects of that peaceable, fearless revolution now.

Men have long stigmatized women who are victims of sexual assault by calling them “stupid” or “sluts” — or both. In 2017 women learned a valuable truth: stupid and slut are just words, and words can’t harm you; particularly if you don’t recognize their power. When I read the issue of New York magazine with thirty-five accusers of comedian Bill Cosby on the cover, I had tears in my eyes. Really. Thirty-five women had banded together in defiance of the ugly sneers of despicable men. The patriarchy was starting to crumble.

But why is this happening now? Because the rule of men has failed. A male God requires a rupture with nature. He tells Adam to “have dominion over the fish of the sea, and over the fowl of the air, and over every living thing that moveth upon the earth.” Well, our “dominion” has been a disaster. You know what I mean: mass extinctions, toxic-waste dumps, and now a disruption of climate that could be catastrophic. Maybe that God with the long white beard was wrong.

I first learned about the patriarchy in 1994, when my wife, Violet, became an “ecofeminist.” This meant that she studied herbalism and periodically met with a group of women — usually on the full moon — to sit in a circle, sing hymns to the Goddess, and do healing meditations.

My wife and I had big arguments about her new feminist critique of male domination. “Where is the patriarchy?” I demanded. “You mean there’s a group of men who meet somewhere and run the world? How come no one has ever seen this secret patriarchal cabal?”

Violet stuck to her principles, and one day I had an awakening. The patriarchy was inside me. It was the voice in my head accusing me of being a “faggot” if I deviated from a strict code of so-called manly behavior: A faggot weeps; a man does not. A faggot begs for forgiveness; a man exiles himself. A faggot writes poetry; a man sharpens his chain saw.

I am ready for the patriarchy to go down, even if it brings me down with it. But I don’t believe it will. Because the end of the patriarchy won’t mean the beginning of the oppression of men. When the slaves are freed, the masters are freed as well. It’s painful to be a “real man”: to constantly fear — and despise — weakness; to live without humor and poetry and whimsy. It’s a prison with oneself as inmate, guard, and warden. I am personally sick to death of it.

Sparrow is the chosen name of a writer who lives in Phoenicia, New York, and whose work frequently appears in The Sun magazine, which is where this piece first appeared. (Used with permission.) A longtime poet, activist, and musician, he is a member of the New York-based literary group, The Unbearables, and has published several poetry collections with Soft Skull Press, as well as chapbooks in collaboration with the St. Mark’s Poetry Project. He also has served as the editor for the literary journal Big Fish. His most recent book is How to Survive the Coming Collapse of Civilization (And Other Helpful Hints), 2016. The journal of his 2016 satirical campaign for president is now available as an e-book: On certain nights everyone in the USA has the same dream. Follow him on Twitter @Sparrow14.