Somaly Mam | Something in me has always been a fighter 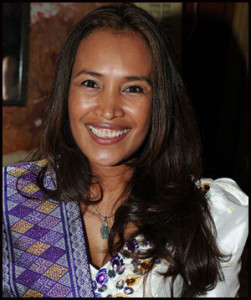 I’ve had a hard time facing the subject of human trafficking. Surely we ended slavery a century ago, I told myself. Perhaps activists were overstating the case, using a provocative term, “slavery,” to compel our attention.

Then Somaly Mam received a CNN Hero award in 2006 and a primetime national TV audience was introduced to a former sex slave transformed into a radiant survivor, doing daily battle on behalf of the victims of humanity’s most troubling perversions. If she could witness and endure the horrors of life in a filthy brothel and emerge transcendent, surely I could bear to educate myself.

Still, it was six more years before I convinced myself to read The Road of Lost Innocence, Mam’s memoir, published in English in 2008. Despite the heartbreaking narrative of her early life, Mam tells her story with so little sensationalism and with so much determination to extricate girls from a fate she knows too well that the unspeakable parts didn’t live in my mind in a debilitating way. Instead, what lived was the shining light of a small, unbreakable woman.

As Mam explains, human trafficking is a global problem, but is most rampant in poor countries where women and girls have less access to education and economic opportunity. A 2011 study, Understanding Human Trafficking Origin: A Cross-Country Empirical Analysis, by Smriti Rao and Christina Presenti, found that transitioning economies—those undergoing rapid industrialization, urbanization, war, civil strife, or other periods of disruption—are nineteen times more likely to rank in the highest category for human trafficking than more stable countries and economies. Nevertheless, a friend whose husband is in law enforcement in Tacoma, Washington, assured me that human trafficking exists in the United States, as well.

The first international agreement dealing with sex slavery was the 1904 International Agreement for the Suppression of the White Slave Traffic, which grew out of a convention by an informal group of nations, because neither the League of Nations, nor the U.N. had been established yet. In 1949, the United Nations adopted the Convention for the Suppression of the Traffic in Persons and Exploitation of Prostitution of Others, which declared sex trafficking “incompatible with the dignity and worth of human beings.” This Convention served as a model for future agreements, such as the 2000 Convention against Transnational Organized Crime (CTOC), to which was attached the Protocol to Prevent, Suppress and Punish Trafficking in Persons, especially Women and Children. Known as “The Trafficking Protocol,” this document is a global, legally binding instrument on trafficking, and the only one with an agreed-upon definition of the crime: “Human trafficking is the acquisition of people by improper means, such as force, fraud or deception, with the aim of exploiting them.” It goes on to define exploitation as including, “at a minimum, the prostitution of others or other forms of sexual exploitation, forced labor or services, slavery or practices similar to slavery, servitude or the removal of organs.”

Although countless individuals and organizations have worked diligently to end human trafficking—and to enact the 2000 Trafficking Protocol—perhaps no one has done more to bring the issue to the public’s attention than the woman who had been a Cambodian sex slave herself. Sold into servitude at around age eleven or twelve, raped, then sold as a child bride and later, while still a teenager, as a sex slave, Mam endured unspeakable horrors for more than a decade. Nevertheless, she has become the unforgettable face of a trafficked survivor. With her inspiration, the public was willing to focus attention on eradicating an evil it had ignored for far too long.

In 2006, the year Mam achieved recognition in the United States as a CNN Hero, she also was named Glamour Woman of the Year. The double-barreled attention brought her to the awareness of two young Americans—Jared Greenberg and Nicholas Lumpp—who decided in 2007 to work with Mam to create a U.S.-based foundation to support her work, the Somaly Mam Foundation. In 2008, Mam’s memoir was published in English. In 2010, Mam was one of the women featured in the book and documentary, Half the Sky, by Nicholas Kristof and Sheryl Wu Dunn. In 2011, she was interviewed by Sheryl Sandberg at Fortune magazine’s Most Powerful Women Summit. The media coverage has enabled Mam to greatly expand public awareness and her foundation’s fundraising efforts—through both grassroots donations and corporate support—and to expand the foundation’s programs, as well. Although Mam’s name is still not exactly a household word, her growing recognition is raising the awareness of the issue she is championing.

Interviewing Mam was challenging for a non-Khmer, non-French speaker like myself. Although Mam speaks English, it is heavily accented with her two other tongues. A pair of assistants helped her negotiate my questions and helped me understand her response. Despite the difficulties, by the end of the interview I felt a deep sense of appreciation and gratitude for the heart and soul of this brave woman.

The MOON: How big a problem is human trafficking in the world today? Is it a global problem, or is it confined to certain regions? What is its significance in the United States?

Mam: Human trafficking is a global problem, affecting at least one hundred and sixty countries, including the United States, where, according to the Polaris Project, one hundred thousand children are exploited for the sex trade every year. Worldwide, approximately twenty-one million women and children are trafficked for forced sex or labor—contributing to an estimated $32-billion-a-year industry. Although human trafficking is a global problem, we focus most of our work in my home country of Cambodia. Our work has raised global awareness about the issue and its prevalence even in cities and suburbs across the United States.

The MOON: In the U.S., we sometimes think of prostitution as a “victimless crime,” as it presumably occurs between two consenting adults. This is not the situation you describe in your memoir, The Road of Lost Innocence. Will you please describe for readers the type of prostitution that is commonplace in Cambodia and elsewhere? Would you be willing to tell us your personal story of how you were forced into prostitution?

Mam: There is a difference between prostitution and sex trafficking. The difference is choice—although even in the case of women who are “choosing” prostitution, they are often forced by factors like poverty. Their families are starving and they lack skills, training, or other opportunities. Nevertheless, if a grown woman has chosen prostitution, we do not count her as trafficked. Sex trafficking is slavery; forcing others to have sex against their will through the use of coercion, violence, and manipulation. It is one of the greatest human rights issues of our time.

It is not easy for me to tell my story over and over. That’s why I wrote my book, so that I wouldn’t have to keep telling it. Nevertheless, not everyone has read my book. So, briefly, I will say that I was born around 1970, or 1971, in the forests of Cambodia, where I was abandoned by my parents and left in the care of my maternal grandmother. I do not know why my parents left. Perhaps they were seeking a better life, or perhaps they were forced to leave as a result of thirty years of war. Before I was five years old, Cambodia had been carpet-bombed by the Americans. Then it was seized by Pol Pot’s Khmer Rouge regime. The four years of Khmer Rouge rule, from 1975 to 1979, resulted in the death of twenty percent of the population. People were starved, displaced, forced to work as slaves, or fight for the regime. There are many reasons my parents might have left the forest.

My villagers were Phnong, a tribe of mountain people different from the Khmer who populate the lowlands of Cambodia. In the Khmer language, “Phnong” means “savage.” We are looked down upon because our skin is dark. Cambodians see it as black and ugly. They see a plump woman with white skin as the ultimate object of beauty and desire. I was dark and thin and considered very unattractive.

Although my father was Khmer, the mother’s lineage determines ethnicity among the Phnong. That is why I was left with my maternal grandmother. However, it wasn’t long before my grandmother also left the village, without any word or explanation. She probably didn’t mean me any harm. Our village was small—no more than a dozen round huts in a clearing. There were always people around me. Nevertheless, I slept alone in a hammock and lived like a little wild creature—at home everywhere and nowhere. Although I loved the forest, the rivers, and the waterfalls, I was often cold. And I was very unhappy not to have a mother to hold and kiss and stroke me. That’s why I made friends with the trees. I talked to them and told them my sorrows.

Claudine Nash | You wasted nothing
Larry Carter | An empowering moment