in Archives, Movies You Might've Missed 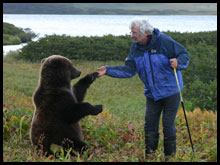 The Edge of Eden: Living with Grizzlies

This 2006 documentary, produced and directed by Jeff and Sue Turner, showcases the life and work of Charlie Russell as he raises orphaned grizzly bear cubs in the wilderness of Russia’s Southern Kamchatka peninsula.  Becoming their surrogate mother, Russell struggles to keep his cubs alive and teach them everything they need to survive in the wild. Through flashbacks, we learn with Russell from his early days among grizzlies, the  ten years spent raising cubs in Russia, and his attempts to stop the hunting and poaching that kills so many of Russia’s bears. His work gives Russell rare insight into the world of grizzlies. He has learned that they are not the aggressive killers so many believe, but rather are peaceful creatures who enjoy human company. Although our misplaced fear of them is driving them to the edge of extinction, it is possible for man and bear to live together peacefully and safely, sharing this earth.

Into the Wild is a critically acclaimed 2007 American biographical drama written and directed by Sean Penn. An adaptation of the 1996 non-fiction book of the same name by Jon Krakauer, the film tells the story of Christopher McCandless, who abandoned his conventional life after graduating from Emory University. Cutting up his credit cards and donating his life savings to Oxfam, McCandless set out across North America towards the wilds of Alaska, seeking adventure, authenticity, and perhaps even something as grand as enlightenment.

He was successful in at least the first, and undoubtedly gained some wisdom, as well. Unfortunately, his adventure proved fatal after only 119 days in Alaska. Although the film speculates that McCandless’ death was caused by mistakenly choosing the wild sweet pea rather than the wild potato, subsequent research debunks that theory, as neither plant is poisonous.  Despite the tragic ending—and the heartache McCandless’ actions caused his family—the film tells a poignant story of a young man with Thoreau-like intentions whose reach exceeded his grasp. His journal, however, reveals no panic or regret. In fact, his farewell message gave thanks for his happy life and asked for God’s blessing upon everyone. Since his death, millions of readers and viewers have been moved by McCandless’ life and quest—perhaps reflecting the need many people feel to escape the confines of so-called civilization.

The film, which stars Emile Hirsch as McCandless, Marcia Gay Harden and William Hurt as his parents, along with Catherine Keener, Vince Vaughn, Kristen Stewart, and Hal Holbrook, premiered during the 2007 Rome Film Fest and later opened outside of Fairbanks, Alaska on September 21, 2007. It was nominated for two Golden Globes and won the award for Best Original Song “Guaranteed” by Eddie Vedder. It was also nominated for two Academy Awards including Holbrook for Best Supporting Actor, and was named best movie of the year in 2008 by the American Film Institute.