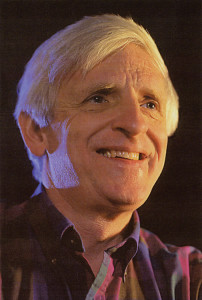 An Episcopalian priest and theologian, Matthew Fox began his career as a member of the Dominican Order of the Catholic Church but was expelled in 1993 by Cardinal Ratzinger, who later became Pope Benedict XVI. Among Fox’s teachings the Catholic hierarchy found most objectionable was his belief in “original blessing,” which became the title of one of his most popular books. The concept was in direct contravention of the Roman Catholic doctrine that people are born into “original sin.” Fox was also criticized for his embrace of the divine feminine and his acceptance of homosexuality.

An early and influential proponent of “Creation Spirituality,” which recognizes the Divine in all creation and all creation in the Divine, Fox draws inspiration from the Catholic mystics such as Hildegard of Bingen, Thomas Aquinas, Saint Francis of Assisi, and especially Meister Eckhart, about whom he has written three books, including his most recent, Meister Eckhart: A Mystic-Warrior for our Times. Creation Spirituality also embraces other spiritual traditions, including Buddhism, Judaism, Sufism, and Native American spirituality. In addition to drawing inspiration from the mystics—whom he calls “ecstatic lovers”—Fox is also a champion of the prophetic tradition. Prophets, he says, are the spiritual warriors, calling attention to cries for justice. It is his outspoken activism on behalf of justice that has earned Fox the label “radical,” a term that doesn’t bother him, since it comes from the Latin word for “root,” the same as “radish.” He fully admits to a desire to “go deep” and to call people to return to the roots of their spiritual traditions—which are love, kindness, joy, reverence, and awe, Fox believes.

Fox is the author of more than thirty books. including The Coming of the Cosmic Christ, Original Blessing, Creation Spirituality, The Hidden Spirituality of Men, Occupy Spirituality, and most relevant to this month’s theme, The Reinvention of Work. He spoke with The MOON at length by phone.

The MOON: What is the difference between “a job” and “work”?

Fox: Work is your calling; your purpose; what you’ve come here to do in this lifetime. A job is something we do to pay our bills. The ideal job combines the two—enabling you to get paid to fulfill your calling. Sometimes, though, you have to settle for a job to pay your rent—at least temporarily—and fulfill your purpose in your off-work hours.

It’s important to know the difference because I think that a lot of people’s dissatisfaction with their jobs eats away at their real work if they don’t realize they can do both. Joy is the sign of real work: the joy that you derive from doing it and the joy that others derive from the result. If the joy is missing, it’s not your work; it’s a job. We have a right to joy in our work. In writing The Reinvention of Work I researched all of the world’s great spiritual traditions to see what they said about work. They have a lot to say about it and they agree on this and many other principles of work—that joy is integral to it.

The Buddhists also say “Do no harm,” so we also have to ask ourselves that question: Is our work doing any harm to ourselves, to others, to the environment, or to future generations? If it is, what can we do to mitigate it? There’s often a shadow side to the work that we do, and as with all shadows, it’s important that we acknowledge and confront that shadow.

The MOON: You’ve called the job crisis a spiritual crisis. Why?

Fox: Because people who don’t have work feel very bad about themselves. They can’t give back to the community. They feel useless; they can’t take care of their families; they don’t have a way to participate in the life of their society. We all want to give back to the community and feel good about ourselves, which is why whenever there are periods of high unemployment, we also find high incidences of drug abuse, alcoholism, depression and anger, which gets expressed as domestic violence and divorce. Kids get beaten and end up on the streets, so we have homelessness and crime. Joblessness can even result in suicide. Human beings need work for their spiritual benefit and to be able to give back to the community.

The MOON: You’ve also said that employment can create a spiritual crisis. Why?

Fox: Because people often get wounded at work. The great British economist E.F. Schumacher noted that we have insurance for people who get physically damaged at work, but not for those who get spiritually damaged. When a work situation is difficult for us, when we have to deny some aspect of ourselves to perform it, we often come home and numb ourselves with television, alcohol, or fall for other addictions to cover up the pain and emptiness in our hearts from a work situation that does not return joy.

The MOON: How did we get to this situation, where there aren’t enough jobs to employ everyone and the jobs that are available are demoralizing or debilitating for those who have them?

Fox: It’s obvious that the shenanigans on Wall Street brought about the collapse of the economic system seven years ago and put a lot of people out of work and wiped out their savings accounts, pensions, and financial security. Of course it was Main Street that bailed out Wall Street; taxpayers paid for these enormous loans to the banks and their insurers. Although a few laws have been put in place to curb the speculation of Wall Street, by and large nothing substantial has really changed. Wall Street is doing its thing, while Main Street remains struggling. There are a lot of people who have ceased even to look for employment, because unemployment was so overwhelming. And that’s just in the United States. Worldwide, the unemployment—or under-employment—situation is even more volatile, leaving entire generations hopeless and sparking unrest, such as that which touched off the Arab Spring.

Here in the U.S., a lot of young people have left the economic system as we know it and taken lessons from this debacle that there is no security in the jobs that being offered by corporate America. They’re adopting new values: living more simply by living in a community with others, which is much cheaper. They’re only taking jobs that they believe in, that match their values, or else they’re just taking part-time work so that they have time for activities that feed their spirit. They’re also postponing marriage and having children. They’re learning to take time for conviviality and shared meals, growing a garden, political organizing or community activities, spiritual practices, and artistic pursuits. This is all quite unrecorded—it’s taking place below the awareness of the media—but I find that a lot of young adults are letting the current economic system go without them.

Of course, other people, like David Korten, are working on the real solution—an economic system that will benefit everyone in the world—not just the two-leggeds, but the animals, the forests, the oceans, and the land itself. That’s really the only long-term solution, a new economics.

The MOON: And what would that economic system look like?

Fox: It would take into account not just something called Gross National Product (GNP), or profits and loss; it would also take into account ecology and community and the generations who come after us—what are the costs and benefits to these? We can’t just “externalize” these costs and say they don’t matter. Economists and corporate planners might not count them, but in the real world, they matter. Will future generations have a flourishing planet, or not? Will we have clean water to drink, and air to breathe, or not? Our present system has blinders. It’s completely anthropocentric—it’s only about humans, the stock market and how much money I have in the bank. Even with this narrow focus, only some humans matter. The signs are all around us that this system is not sustainable; it’s bound to fail. It failed seven years ago and it’s on a course for failure again.

It’s interesting that the Pope has spoken out on these things in very forceful language. He’s called our present economic system “savage capitalism” and a “new idolatry of money” that ignores the plight of the unemployed billions in the world.

The MOON: I agree with what you’re saying, and yet I don’t see steps being taken to create a new kind of economy on any kind of national, or global, scale.