Reimagining our stories, ourselves 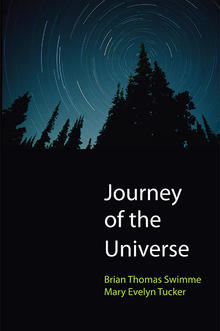 The Journey of the Universe is an Emmy Award-winning documentary and companion book project by cosmologist and evolutionary philosopher Brian Thomas Swimme and religious historian Mary Evelyn Tucker. The 2011 film traces the history of the cosmos—from the original “flaring forth” (“the Big Bang”), through the creation of galaxies and of a planet (Earth) that could support life, through the emergence of humans and their amplification of consciousness through the creation of symbols, to our present point in time. Swimme calls this process “self-organizing” and describes the entire universe as participating in it: life organizes itself to generate more life, greater complexity, greater intelligence, and consciousness.

Now, however, humans have become a partner equal in power to the life-generating forces of the planet; yet our impact is destroying that same planet. Continuing on our present trajectory will doom other life forms—and soon enough, homo sapiens—to extinction. Will we understand what we are doing and focus our consciousness in a way that will cooperate in sustaining life on the planet, or will we become a failed evolutionary experiment?

Swimme is a passionate host, enthralled by the beauty of the story he is telling about the cosmos, our own planet, and the astounding creativity of life itself. His bets are on “the human genius for wonder” to guide us through this perilous period and keep the story of the universe going on this planet we call home.

The 50-minute film was broadcast originally on KQED in San Francisco and is now available on DVD, or can be streamed live here: 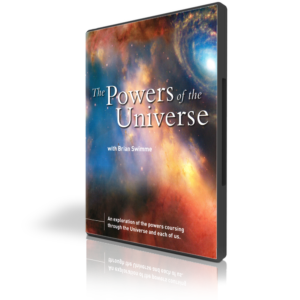 Powers of the Universe is an 11-episode program, also by Brian Swimme, each of which explores a different “power” of the universe—a different mode by which it operates. These include, for example, “allurement”—the ability of life forms to attract what they need, and “emergence”— life’s ability to generate new life; “homeostasis”—the universe’s strategy for maintaining some of its best accomplishments, and “synergy”—life’s strategy for making the whole greater than the sum of its parts. “Cataclysm,” much as we hate it as individuals, is the universe’s way of getting rid of what no longer serves, in order to give rise to the next great advance—such as “transformation”— the universe’s ability to adapt, evolve, and create anew.

In each episode, host Swimme helps viewers understand the questions we might ask ourselves in order to collaborate with the power of the universe we are experiencing. “What human response to this situation would further the evolutionary project?” he asks.

In “cataclysm,” for example, Swimme suggests that we cooperate with the power that is destroying us by consciously surrendering those ways of being in the world that no longer serve us. For example, we can see the destruction of consumer culture as part of the Earth’s work of cataclysm, seeking to free us on behalf of all life. Our willingness to let consumer culture go puts us on the side of the powers of the universe…easing our transition.

Powers of the Universe is available on DVD or live streaming by episode on the web.