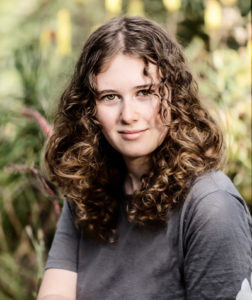 Standing ankle-deep in a creek on an isolated mountain in southeastern Arizona, I encountered faith. The creek burbled. Sycamore leaves fluttered. Reflections shape-shifted in blue-green fractals. Red mud pulsed with sun. Faith was not an object I could find or lose, not the purple stones I picked up and tossed back into the water, nor my shoes resting on the shore. Faith was a current, cool and foamy, of strong belief and trust. Part of me flowed downstream, rolling over rapids, winding down the mountains to percolate into desert dust, arcing through the soil to nourish the roots of parched orchards. Paying attention to light, water, and rock evoked a spiritual energy, a tethering to the creek, a feeling of expansive connectivity. Standing on water-slicked boulders, I was aware that one misstep would send me plunging into the water. Yet, I was not afraid of falling. I trusted the rocks I walked across, letting my bare feet brush their mossy surfaces. I crossed stepping stones of purple agate and dark shale that had been smoothed by centuries of wind and water. The shadows of cottonwoods, the petals of yellow flowers, the glides of a water strider swept me beyond my finitude into a current of creek song.

Faith, as irrational belief and trust, has consequences in a society where the bedrock of truth has been faulted by propaganda, alternative facts, Twitter wars, and fake news. Climate change deniers treat climate change as a belief—to either accept or deny—rather than a scientific fact. In Arizona, drought pushed dust-devils through small towns, withered crops, and bleached the desert to gleaming bone. I listened to the creek gurgle and wondered what role faith should play in political action. When does faith in the politics, the people, the institutions, the Constitution of America become antiquated and naïve, frothy and foolish? When is faith dynamic and surging, amorphous and substantive like a current of water? When is faith a faded book with barely readable words gathering dust? The creek whispered past my ankles like the music of many voices.

Driving in the mountains in Arizona plays with distances. A mountain looms close on the horizon, only to shrink across a shimmering stretch of desert. A seemingly distant glimmer of road suddenly rolls underneath the car as I curve around a switchback. Close and far became relative and chimeric. My experiences reading the news have similarly warped my notions of distance between the personal and political. Current events no longer have the haziness of a distant mesa, isolated from the daily narrative of my life. Now, my personal geographies intersect with political ones. The confluence of rivers. The upheaval of rock. Mountains and mirage. The shifting of spaces between public outcry and personal grief, collective memory and private reverie. I remember reading about the Parkland Massacre and thinking, it could have been my high school.

We were a current, a wave of students holding signs that said “Ban Assault Rifles” and “End Gun Violence.” We shouted. We marched. We walked out of class. We gathered. Hundreds of us at Stanford stood clustered around the fountain by the library to hold a rally in the wake of the Parkland Massacre. For 17 minutes, to honor the 17 lives lost, several student speakers gave speeches, including an alumnus of Marjory Stoneman Douglas High School and a Black Lives Matter activist. One man quietly walked up to the megaphone and repeated over and over again, “WHY?,” his face was contorted with grief, and his voice throbbed with energy. His question rolled over the crowd, unanswered. His question in its brevity reached beyond discussions of gun control to interrogate broader systems of economic, social, and political power that condone violence. His voice echoed off the stone walls of the quad, and the wind carried it into the static blue sky.

We were a movement. We demanded more than thoughts and prayers, more than candles lit in grief. We wanted action, policy reform. We were a river. We rushed unrelenting toward change. We had branches and tributaries that crossed the world, that ran past political borders. We were hundreds of voices shouting together like the sound of rolling water. I had faith in the students and activists surrounding me, a faith that we as a collective force could affect policy change despite the challenges. As I stood amongst the ripple of students, I felt the creek in Arizona moving through me, a heartbeat of watery light.

The summer I went to Arizona was the summer my neighborhood back home in Illinois flooded, when the Des Plaines River swelled to a record high after a series of heavy rains. The river rose bloated with debris. When I called my parents, my dad told me a news crew was standing in our driveway, filming our street, which overnight had become an unrecognizable canal. Neighbors a few streets closer to the river evacuated their homes. Kids paddled through the murky water on inflatable rafts and kayaks, ignoring warnings about cryptosporidium. I grew up on a floodplain, but in recent years we’ve experienced an unprecedented number of 100-year floods, likely due to climate change. I remember playing by the river as a little girl. I was entranced by the silver threads of light wavering across the water. My dad warned me not to get too close to the water, out of fear that the current would suck me in and I would drown.

Faith, like water, is in perpetual flux. An excess of faith in a person or institution can become ignorance and overwhelm rationality, the way the flooded Des Plaines River washes over the trees and houses in its path. Too little faith and the current of trust and energy dries up, leaving behind a scarred wash bed. Within the gentle burbling of a creek lurks the ghost of dried stones and the ghost of overflowing banks. I don’t know when faith becomes a river of productive political energy instead of a flash flood or drought. Perhaps the known and the unknown interact to channel faith, the way water’s velocity and volume combine to determine the rate of stream flow. In earth science classes, I learned how to read the language of water, the signatures it engraves on the land, and the cursive of its currents. I can translate the scrolls of geologic history embedded in stream banks and predict the future health of an aquatic ecosystem from studying the life underneath its surface. But mystery remains in the interplay of light off water, the murmur of wave, the echo of reed and stone. Mystery ebbs and flows from the currents within, the headwaters of faith.

Rebecca Nelson is an undergraduate at Stanford University studying creative writing and ecology. Her writing has appeared in the Stanford Daily and Leland Quarterly and is forthcoming in Understory and has received a Scholastic National Art and Writing Awards gold medal. Contact her at rnelson3@stanford.edu.

Photo by Christoph Deinet for Unsplash.com