Movies You Might’ve Missed | Others I have known

At least half a dozen excellent films have chronicled various aspects of the world’s current refugee crisis–from mainstream releases like The Good Lie, to the independent documentaries reviewed here. All are recommended. 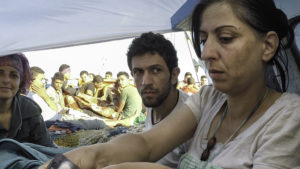 The Crossing is a first-hand account of the perilous journey made by a group of Syrian refugees who traverse one sea, two continents, and five countries in search of a home far from the war and persecution of their own country. Their sea crossing turns out to be on a boat manned by human traffickers who have never sailed on the open sea. Taking longer than planned, the travelers run out of food and water and are only saved by signaling a passing oil tanker. Perilous as the crossing is, it turns out to be easier than the challenges the migrants face in their new homelands—although these are skilled, educated, middle-class refugees: a TV journalist, a pharmacist, a musician, and an IT specialist, along with various friends and family members. Each must struggle to stay sane and create a new life from the chaos of regulations, refugee camps and hostels, new languages, foods, customs, and expectations they encounter. Directed by George Kurian, a documentary filmmaker and photojournalist currently based in Istanbul, who has lived in Afghanistan and Egypt and has worked in those countries, as well as Syria, Iraq, Iran, Turkey and South Asia, The Crossing shows us the lengths to which people go to find safety and forge their own destiny. One reviewer described the film as:

“A deep reality check to us all, and a raw look at the lives of refugees, their struggles, fears, frustrations, aspirations and memories, this documentary should be mandatory, especially for those who find it hard to understand that these people are humans too, and that they are in no way ungrateful or freeloading. They were forcefully alienated from their homes and are attempting to start anew.” 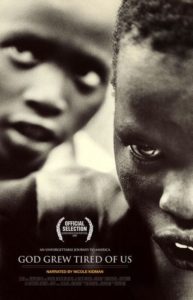 God Grew Tired of Us is a 2007 documentary that tells the story of three of the “Lost Boys of Sudan” who in 1987 were among an estimated 27,000 young Sudanese males who fled their country for Ethiopia on foot to escape persecution and death in their home country. In 1991 the refugees were forced to flee again to Kenya.

During the years they walked in search of safety, thousands died from starvation, dehydration, bomb raids and genocidal murder. Finally, an estimated 12,000 found relative sanctuary at Kakuma, a UN refugee camp in Kenya. In 2001, 3,600 “lost boys,” including the film’s protagonists, John Bul Dau, Daniel Pach, and Panther Bior, were granted asylum in the United States.

Sponsored by Catholic Charities International, the three boys once again undertake a journey, leaving behind thousands of other refugees who, through their shared trauma, have become their adopted extended family. The boys must now adapt to the shock of being thrust into the competitive culture of the United States. They each work several jobs, dedicating themselves to helping those they left behind in Kakuma, and to discovering the fate of their parents, siblings, and family members.

“God grew tired of us,” is from a statement by John, who wonders aloud rather God had abandoned his country because of all the horrors people inflicted on each other. (Horrors that continue to this day.)

God Grew Tired Of Us was produced, written and directed by Christopher Dillon Quinn; narrated by Nicole Kidman; and the executive producer was Brad Pitt. The film won both the “Grand Jury Prize” for documentaries and the “Audience Award” in the “Independent Film Competition: Documentary” category at the 2006 Sundance Festival. It also won best documentary at the Deauville Film Festival in France and the Galway Film Festival in Ireland. Christopher Dillon Quinn received the Emerging Documentary Filmmaker Award by the International Documentary Association in 2007. The film is available to rent on Netflix and various other platforms, and can also be watched for free on YouTube. 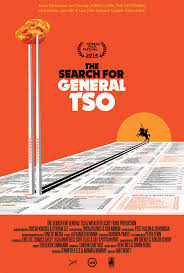 The Search for General Tso traces the history of General Tso’s Chicken, a staple in virtually every Chinese food restaurant across the U.S., while also telling a touching story of the Chinese immigrant experience in the United States.

General Tso’s chicken was created in the 1970s by Peng Chang-kuei, a Taiwanese chef to Chiang Kai-Shek, who immigrated to New York City and opened a restaurant that was popular with United Nations personnel. He reportedly added sugar to a more traditional chicken dish to appeal to American tastes, naming it after a famous 19th-century general from China’s Hunan province.

Ian Cheney, who wrote and directed the film, was crossing the United States in the making of another documentary, King Corn, when he stopped for the night in the middle of the American heartland and found his only food choice an unexpected one: Chinese. Piqued as to why and how Chinese restaurants have become so ubiquitous—even in places with no visible Chinese populations—he teamed with Jennifer 8. Lee, author of The Fortune Cookie Chronicles, a history of Chinese food in the U.S. and elsewhere, to make The Search for General Tso.

With a light touch, the film documents the history of Chinese immigration in America, which became significant during the San Francisco gold rush and the building of the transcontinental railroad, but led a mere 30 years later to the Chinese Exclusion of Act of 1882. Blatantly racist, the act prohibited Chinese immigration until it was repealed in 1943, when China allied with the U.S. in battling Japan. But a curious thing happened as Chinese-Americans faced persecution in cities like San Francisco, Los Angeles, and New York. As a reviewer in The New Yorker wrote, “Rather than fleeing back across the Pacific, [Chinese-Americans] dispersed from their urban enclaves and filled the heartland of America. From Flagstaff, Arizona, to Hammond, Louisiana, Chinese families eked out a living with a portable and practical skill: they fed people.”

By the time President Nixon visited China in 1972, Americans were hooked. They watched, fascinated, as Nixon dined with chopsticks. Today, Chinese food is as popular as pizza and tacos—two other immigrant-introduced staples that have been wholeheartedly embraced by Americans.

The Search for General Tso premiered at the 2014 Tribeca Film Festival, was picked up by Sundance Selects, picked up half a dozen film festival awards, and earned a combined Metacritic score of 72 and a Rotten Tomatoes rating of 94%. It is available to rent on Netflix and other platforms.