NO DOUBT the two best-known movies about “dreaming our reality” are The Matrix and Inception. The Matrix is, of course, about waking up to the fact that we’re sleepwalking through our existence, while Inception portrays the use of lucid dreaming for nefarious purposes—to steal ideas from another’s subconscious, as well as to plant them. Though Inception’s plot is far-fetched and difficult to follow—even the characters have a hard time keeping track of what reality they’re in—this dilemma is apparently realistic. Practiced lucid dreaming confirm that it can be hard to know for sure whether one is “dreaming” or “awake” and, like DeCario’s character, devise tests for themselves to determine which reality they’re in.

Two “movies you might’ve missed” on the subject of “mindful dreaming and living” are Owned and Operated and What the Bleep Do We Know?! 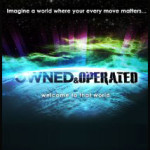 Owned and Operated is a 2012 documentary illustrating the premise that human consciousness is awakening by means of words, images, and videos posted to the Internet. The film shares perspectives ranging from spiritual teachers such as Andrew Harvey, the Dalai Lama, and Krishnamurti to politicians and lobbyists (from Jack Abramoff to Rand Paul to Bernie Sanders), along with dozens of other commentators: Dean Baker, Cornel West, Amy Goodman, George Carlin, and more. The film proposes that each one of us is, in every moment, being asked to choose the world we believe in and want to create: one in which millions are obese while other millions starve; in which the beauty and bounty of nature is exploited and destroyed for private gain; in which we’re all connected by environment and spirit, yet divided by imaginary borders and belief systems…or, one in which our unity and interdependence are honored, recognized, celebrated, and leveraged for the good of all. 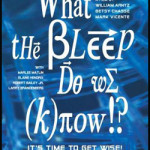 What the Bleep Do We Know?! is a 2004 feature film that combines documentary-style interviews with a narrative story line and hundreds of special effects intending to illustrate quantum reality. Critics have called the film “quantum mysticism” for its willingness to extrapolate a layman’s understanding of quantum physics to states and powers of consciousness that shamans, sages and “enlightened” ones have spoken of for millennia. Though the 10-year-old special effects now make the film look slightly cheesy, the concepts presented—that individual and group consciousness influence the material world—have become accepted by a significant percentage of the population: witness the ubiquity of “the law of attraction” and “your thoughts create your reality” in common parlance, at least among Americans of a certain demographic. In fact, the conversation has advanced from a simplified “your thoughts create your reality” to a more developed understanding: that your thoughts inspire your actions, which create both personal and collective reality, depending upon how widely shared they are. As John Lennon reminded us, “A dream we dream together is reality.”