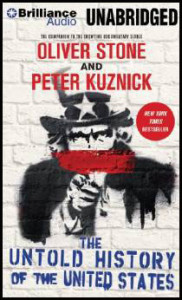 Oliver Stone’s The Untold History of the United States

If you’re wondering how a movie made by Oliver Stone could end up on anyone’s “Movies You Might’ve Missed List,” it’s because Stone made this film as a 10-part documentary series for Showtime. And because it tells an unflinching narrative. “The prevailing notions of American ‘altruism, benevolence, and self-sacrifice’ have never been challenged quite so effectively for such a wide audience,” The Nation’s reviewer, Jon Weiner, wrote.

Stone co-authored History—plus a 750-page companion volume, including 89 pages of footnotes—with Peter Kuznick, history professor and director of the Nuclear Studies Institute at American University. Stone’s theme is not that conspiracies have perverted U.S. history, nor that the ruling class has an iron grip on events. Beginning with World War I and ending with the election of President Obama, Stone and Kuznick show how our own history—and the history of the world—could have turned out much differently, if other—present and viable—choices had been made and other competing forces been successful.

For example, if Henry Wallace had won re-nomination as FDR’s vice president in 1944, he, rather than Harry Truman, would have become president upon FDR’s death in 1945. A Wallace presidency, Stone argues, probably would not have ordered the bombing of Hiroshima and Nagasaki, and would also likely have avoided McCarthyism and the Cold War.

Nor was Wallace’s candidacy a long shot. Not only was Wallace the incumbent but, according to a 1944 Gallup poll, sixty-five percent of Democratic voters wanted him on the ticket, compared to only two percent for Truman. As Untold History reveals, however, conservative forces inside the party adjourned the convention before Wallace could be nominated and might also have subverted the subsequent vote counting.

Nonetheless, even with Truman as President, the U.S. could easily have avoided bombing Japan with nuclear weapons, as Stone and Kuznick document. Generals Eisenhower and MacArthur, along with most of the other top generals and admirals of the day, opposed it, as did many of the scientists who had developed the bomb.

Stone also makes the case that had President Kennedy not been assassinated, he would have pulled U.S. forces out of Vietnam and negotiated an end to the Cold War. More recently, if President George W. Bush had listened to his intelligence agencies in 2001, the 9/11 attacks would not have taken place—and the wars in Afghanistan and Iraq would also have been avoided.

As Stone makes cinematically clear, none of these “alternative histories” were far-fetched; events could easily have turned out differently. Which, of course, is why Americans need to stay engaged and involved today. History is, literally, in our collective hands.

The companion book—also available as an e-book and audio book—tells an even larger story, tracing the development of (yes) American empire through the crushing of the Filipino struggle for independence; the establishment of U.S. financial dominance as a result of World War I; a seemingly endless series of U.S. military interventions, covert operations, and wars in Latin America, Asia, and the Middle East on behalf of right-wing dictators; the development of an intrusive national security state and the dismantling of constitutional liberties. This perspective on U.S. history—rather than the glorified heroic version we learn in elementary school—helps Americans to see ourselves as others see us: as the most powerful country in the world, yes; but not as “good” as we imagine.

The Untold History of the United States is now available on DVD and online.