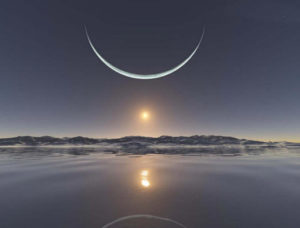 “Wherever forests have not been mowed down, wherever the animal is recessed in their quiet protection, wherever the Earth is not bereft of four-footed life – that to the white man is an ‘unbroken wilderness.’ But for us there was no wilderness; nature was not dangerous but hospitable; not forbidding but friendly. Our faith sought the harmony of man with his surroundings; the other sought the dominance of surroundings. For us, the world was full of beauty; for the other, it was a place to be endured until he went to another world. But we were wise. We knew that man’s heart, away from nature, becomes hard.” – Chief Luther Standing Bear, Oglala Sioux

“To encounter the sacred is to be alive at the deepest center of human existence. Sacred places are the truest definitions of the Earth; they stand for the Earth immediately and forever; they are its flags and shields. If you would know the Earth for what it really is, learn it through its sacred places. At Devil’s Tower or Canyon de Chelly or the Cahokia Mounds, you touch the pulse of the living planet; you feel its breath upon you. You become one with a spirit that pervades geologic time and space.” – N. Scott Momaday

“In the beginning of all things, wisdom and knowledge were with the animals, for Tirawa, the One Above, did not speak directly to man. He sent certain animals to tell men that he showed himself through the beast, and that from them, and from the stars and the sun and moon should man learn..all things tell of Tirawa.” Eagle Chief (Letakos-Lesa), Pawnee

“Everything on the Earth has a purpose, every disease an herb to cure it, and every person a mission. This is the Indian theory of existence.” – Mourning Dove, Salish

“We learned to be patient observers like the owl. We learned cleverness from the crow, and courage from the jay, who will attack an owl ten times its size to drive it off its territory. But above all of them ranked the chickadee because of its indomitable spirit.” – Tom Brown, Jr., “The Tracker,” of teachings from his “grandfather,” Stalking Wolf

“The time has come to unite our voices and our hearts, to walk our spiritual paths with practical feet, to restore the balance that’s been missing on the Earth. We cannot wait. It’s time to look with eyes of faith into our future and believe we can make a difference. If we have hope, there is potential for extraordinary change – things will survive. The Elders teach us if we return to harmony in our lives, melting the ice in our hearts, reconnecting with one another, we will survive. It is time to use this knowledge to help mankind.” — Angaangaq Angakkorsuaq, Eskimo-Kalaallit Elder, Greenland

“The only place where abundance is warranted is in nature. A person who wastes is a person who insults the gods. In light of the waste encountered in the modern world, one wonders if anyone knows that there is a world outside of this abundance, where people are aware of priorities other than materialism.” — Malidoma Somé, Dagara, Burkina Faso

“Kinship with all creatures of the Earth, sky, and water was a real and active principle. In the animal and bird world there existed a brotherly feeling that kept us safe among them… The animals had rights – the right of man’s protection, the right to live, the right to multiply, the right to freedom, and the right to man’s indebtedness. This concept of life and its relations filled us with the joy and mystery of living; it gave us reverence for all life; it made a place for all things in the scheme of existence with equal importance to all.” – Chief Luther Standing Bear, Oglala Sioux

“We did not think of the great open plains, the beautiful rolling hills and the winding streams with tangled growth, as ‘wild.’ Only to the white man was nature a ‘wilderness’ and only to him was the land ‘infested’ with ‘wild’ animals and ‘savage’ people. To us it was home. Earth was beautiful and we were surrounded with the blessings of the Great Mystery.” – Chief Standing River, Lakota Sioux

“I have no interest in chastising humanity for the problems that currently face the world and my messages will not save you or the planet. There is no adverse condition that cannot be righted with the power of intent and the right use of will. What you embrace or reject today will have a significant effect upon the outcome of the next several years, and my messages are but one of many resources from which to choose. Where the will is established, a way will present itself that is clear, concise and forthcoming. As compassion and authenticity continue to increase, humanity will discover the courage and willingness to heal the environment and the world. Abundance, health and joy will replace scarcity, poverty and fear.” — Pepper Lewis, voice of Gaia

“The spirits of the forest of Gabon have said that we can’t go backwards anymore. We don’t have fear anymore. Time is short. Time is calling us. Spirit exists. It is much stronger than the body. …spirituality is no different among the races. No one chooses where they are born. Only destiny. … We all share ancestors because humanity is humanity.” — Bernadette Rebienot, Omyene, Gabon

“It’s not about Indians, it’s about people… the overall philosophy is to reconnect all people to nature and inevitably themselves.” — Larry Stillday, Red Lake Ojibwe

“It is not enough to fight for the land; it is even more important to enjoy it. While you can. While it is still there. So get out there and hunt and fish and mess around with your friends, ramble out yonder and explore the forests, encounter the grizz, climb the mountains, bag the peaks. Run the rivers, breathe deep of that yet sweet and lucid air, sit quietly for a while and contemplate the precious stillness, that lovely, mysterious and awesome space. Enjoy yourselves, keep your brain in your head and your head firmly attached to the body, the body active and alive, and I promise you this much: I promise you this one sweet victory over our enemies, over those deskbound people with their hearts in a safe deposit box and their eyes hypnotized by desk calculators. I promise you this: You will outlive the bastards.” —Edward Abbey, in his own words, “descended from an endless line of dark-complected, lug-eared, beetle-browed, insolent barbarian peasants, a line reaching back to the dark forests of central Europe and the alpine caves of my Neanderthal primogenitors.”