Larry Dossey, MD | One Mind and why it matters 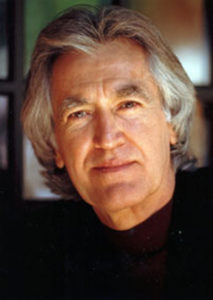 The most urgent issue we humans face is how we conceive ourselves — whether as isolated, individual, complex lumps of matter guided by the so-called blind laws of nature, or as unified, interconnected creatures who, although physical, are also imbued with something more:  consciousness, mind, spirituality: that difficult-to-define quality that says we are connected with something that transcends our individual self and ego.

Every decision we make is influenced by how we answer this great question:  Who are we? It is the question I also address in my most recent book: One Mind: How Our Individual Mind Is Part of a Greater Consciousness and Why It Matters.

Consciousness is like the light shining through a movie projector, illuminating the film and the images that are projected from it. In my view, consciousness is pure intelligence, pure possibility, or Pure Awareness. We each have access to all of it, but individually we display only a limited portion of it.

Consciousness is fundamental. It cannot be explained by, nor reduced to, anything more basic. It is not produced by the brain, but it works through the brain. In this process the brain modifies, restricts, and often distorts consciousness. One of the features of consciousness that is distorted by the brain is the collective nature of our mind.  Our minds feel individual and personal, giving rise to our sense of an isolated self and ego. Our goal, I believe, must be to experience consciousness and our collective One Mind without these distortions.  There are various ways to do this.

The experience of the One Mind is not merely a philosophical or intellectual exercise. It involves a direct apprehension of the universe and all in it as being One, with no fundamental dividing lines or divisions. Everything is perceived as connected with everything else. Partition and separation are seen as temporary illusions. This experience carries with it the sense that one has apprehended Truth, the way things really are, and is accompanied by a feeling of compassion and love — not only toward other humans, but toward all varieties of life.

A sense of connectedness with all others and with all sentient life has been recognized throughout human history as a source of immense joy and fulfillment.  Unity with others has always been a highly prized goal of the great wisdom traditions.

Although “time out” and “time alone” are important, abundant evidence shows that protracted, continual isolation is terrible for happiness, health and longevity.  We are not designed to be alone.

This greater mind is nonlocal, or boundless—not just in space but also in time, therefore it is immortal and eternal. It is a cure for the greatest of all diseases:  the fear of total annihilation with physical death.

The One Mind is also a rich source of creativity, because it constitutes an infinite pool of information that many great artists, poets, and scientists throughout history have learned to access.

How do we know the One Mind exists?

There are two main ways. First, people have experiences in which minds interact and share information at great distances and outside the present. They could not do this if minds were isolated; they must be united and connected for these experiences to occur. Second, there are thousands of actual experiments that confirm these interactions. Experience and experiments show that our minds are connected in ways that transcend separateness.

During the 20th century, we took the mind apart. It’s time to put it back together.

We’ve been taught that our mind is fragmented and divided into the conscious, the pre-conscious, the sub-conscious, the unconscious, the superego, ego, id, and so on. One Mind looks through the other end of the telescope. It shows that our individual minds are part of a greater whole, a dimension of consciousness that encompasses all minds — past, present, and future.

This realization may be our best hope for our survival on Earth. Only by realizing, at the deepest level, our connections with one another and the Earth itself can we summon the courage to make the tough choices that are required in order to survive. So this book is about staying alive — preserving the environment and saving our own skins in the process. The One mind helps us re-sacralize the world, to see it as sacred. When we sense our intrinsic unity with one another, we can upgrade the Golden Rule from its customary expression, “Do unto others as you would have them do unto you,” to “Be kind to others because in some sense they are you.”

There’s strong evidence from hundreds of experiments, as mentioned, in which people exchange thoughts, emotions, and even physical changes at a distance.  This is particularly common between people who are emotionally close. The classic example is a mother who “just knows” that her child is in danger, even though far away and beyond the reach of the physical senses, as if the mother and child have a common mind.

Similar experiences occur between distant identical twins. These are called telesomatic events. They may involve the simultaneous sharing of not only emotions, but actual physical changes as well. Around 30 percent of identical twins report vivid experiences in which they simultaneously and at a distance have the same thoughts and even the same physical symptoms as their twin. This is some of the most dramatic evidence that we are connected through space and time at the level of consciousness.

Another example is creativity, in which people often acquire knowledge of things in ways that that are inexplicable. For example, the great inventor Thomas Edison said, “I have never created anything. I get impressions from the Universe at large and work them out…. Thoughts come from the outside.”

Savants are a related example. Although they are often profoundly mentally handicapped, cannot read, and are incapable of conventional learning, they demonstrate detailed information they could not possibly have acquired through ordinary means. Where does this information come from? I suggest they connect with a reservoir of wisdom that is the One Mind, and “download” information in ways we do not yet understand.

People frequently have detailed dreams of future events, to which I devoted an entire book, The Power of Premonitions. Premonitions involve mind functioning outside the present, without temporal boundaries. This is a frequent feature of minds that are spatially united.

Near-death experiences are also a portal to the One Mind. Some 15 million Americans have experienced an NDE. The hallmark of the experience is a sense of joyful oneness with all there is — an awareness that is so profound that their life is transformed following recovery.

In all, there are six areas of consciousness research in which studies have been replicated in labs around the world, each area giving odds against chance of around a billion to one.

The concept of the One Mind has been around for a long time. We can trace it back 3,000 years to the philosophy of ancient India, where it was called the Akashic Records. Plato recognized this idea, saying, “[H]uman nature was originally One and we were a whole.” It is echoed in the Hindu concept of the union of the human and the divine: tat tvam asi or “thou art that.” The experience of the One Mind in Zen is called satori. In the tradition of yoga, it’s called samadhi. In Sufism, it’s known as fana. In Christianity, it has been called Christ consciousness. Other terms include cosmic consciousness, illumination, awakening, enlightenment, and so on.

Ralph Waldo Emerson, the American transcendentalist philosopher, called the One-Mind concept the Over-Soul. William James, the founder of American psychology, was a proponent of a collective, unitary mind. Carl Jung, the Swiss psychologist, called the One Mind the collective unconscious.

Many great scientists in a variety of fields have endorsed the idea. It has surfaced in modern physics in the writings of Nobel Prize-winner Erwin Schrödinger, whose wave equations lie at the heart of quantum physics. The eminent physicist David Bohm also strongly supported the idea of a single, over-arching mind that includes all individual minds. So too did ecologist Gregory Bateson, as well as many other outstanding scientists. Countless numbers of creative artists and poets have also endorsed the idea.