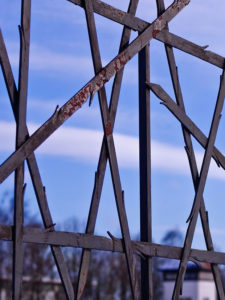 Rachel was just twenty-eight in 1946 when she arrived by boat and bus to postwar Baltimore. Willowy in figure, with alert eyes which showed an age much older than her years, Rachel looked about her with an intensity most strangers found uncomfortable. She had good reason. At Sobibor one always looked around and about in hopes of fending off death.

Grateful for the kind people from the Jewish Agency who helped her come to America and then Baltimore, Rachel did what she could to repay her benefactors. She counted another blessing in her new life when Gilda Margolis hired her on recommendation from the Jewish Agency to help sell and stock in her antique shop. Becoming fast friends, Gilda sat in the front row when Rachel became a citizen five years later. Over the same time period Rachel tentatively returned to the Jewish people and faith in her new home.

Available and interested Jewish men were scarce during Rachel’s first years in the neighborhood where she lived and worked. Many were either married, too old, gay, or just interested in other girls better- looking. Any young man seeing Rachel for the first time drifted away, once he saw those haunted gray eyes devoid of any joy.

The years passed. The loneliness did not.

She poured what love she had into each antique bought and sold. She remembered the lovely furniture and objects of art surrounding her as a child in the Polish shtetl of Piatowka in Poland so long ago.

Before the Nazis came to her birthplace, the child Rachel was always surrounded by precious and wondrous antiques. Her parents loved objects of art and were always on the lookout for a particularly nice French or Italian piece–be it painting, chair, glassware, silk damask–to enhance this or that room in their spacious home. Working again with similar antiques and fine things, she took comfort in them because they reminded her that beauty still exists in an ugly world and never to forget it.

Rachel grew up in a household where Judaism and Judaica went hand in hand. Friday night Shabbos over the dinner table, and Saturday services at the only shul in Piatowka, became part of the rhythms of being Jewish among Jews in the rich province of Lublin Voivodeship in eastern Poland.

Rachel was twenty-three in October 1941 when the first SS arrived one day at the town square amidst the rattle and roar of their trucks and motorcycles and one jeep-like car. The Poles in the vicinity came out to see who’d arrived and what their intentions were. Followed by their priests and bishop, the citizens of Piatowka stood packed together surrounding the Germans in the center.

A German sergeant asked in Polish, “Where are your Jews?”

The mayor rose to the occasion and answered in fairly good German, “They are here. The Jews live in their own quarter past the farmers’ market and behind our cathedral.” The other SS looking around at the shabby houses and deteriorating square smirked among themselves or cracked jokes about the “dirty Pollacks” and “subhuman pigs” they saw. Those Poles closest to the speakers who knew a little German were offended; others who did not know the language sensed they were being derided one way or another.

An SS officer of some rank got out of his kubelwagen and, while conferring with the Polish-speaking soldier, kept flicking a riding crop against his right thigh. After a few minutes of conversation, the SS major looked around the people ringing his troops and shouted, “Polish townsmen! As you know, your country lost the war against our Reich two years ago. Now the Russians are completely defeated, thanks to German arms. Your town now belongs to Germany. Your lives belong to us. Your property will come under martial law. Your Jews will be taken into custody and removed from here in a few days. Anyone resisting our orders will be shot. Now return to your homes until further notice. That is all!”

Needing no further translation, bewildered and fearful, the Poles quickly dispersed. The bishop and his priests remained after everyone else was gone. The sergeant asked why they were standing there when an order to leave was given. The bishop glanced at his colleagues and spoke out.

“Esteemed Germans! This town is under the Church’s protection. My flock is as well. What you want to do with the Jews here is none of our concern. Our lives and property, however, are. We know what happened to Poland after the Russians seized Piatowka. We beg you to remember that all of you are still Christians. In the Name of Christ Jesus, we will help you in your mission to take the Jews in our town away. But please leave us Poles alone and in peace afterward!”

When the sergeant finished translating, the major and his subordinate officers nodded politely in the bishop’s direction that they understood his message. One of the SS lieutenants whispered something to his commanding officer. The major smiled and flicked his riding crop as a sign of permission.

The lieutenant got out of the field car and walked up to the bishop. “We understand your position.  However, we are experienced in these matters, and need no help from priests and parasites on how to deal with the Jews. We are not here to bargain, or to need reminders of your worthless, Jew-ridden religion!” While he spoke, the lieutenant unholstered his pistol to make his point. Prudently, the bishop and his entourage retreated into the cathedral and shut its massive doors.

The next morning the SS fanned out across the main streets toward Piatowka’s “Jewish Quarter.” With speaker horns blaring in German and Polish, the message was quite clear: All Jewish men and boys were to assemble quickly at the town square. Women, girls, and very small children must remain in their homes until summoned.

Rachel looked at her mother, Sarah, and younger sister, Julia, with apprehension. The question “What will happen to Papa and Avram?” passed back and forth wordlessly between them.

When Rachel’s father Yitzhak and brother Avram did not come home late that afternoon, all the women in the Bennesavitz household feared for the worst.

The next afternoon they found out that the Jewish menfolk of Piatowka had been taken out to the woods and killed. A witness who saw the SS make the Jews dig their graves and then shot them in bunches, told others in his family what he’d seen and heard. Being a woodcutter and wise in the ways of the forest, he hid until the SS finally left.

One of the woodcutter’s sons told the priest what his father had revealed the day before, and the cleric informed his bishop. It did not take long for the townspeople to learn of the Jews’ fate. Often in their mutual past, Pole and Jew had come to expect violence between them. If the Church did not foment attacks on the Jews to remind Poles that Jews killed Christ, then local Polish lords and peasants would harm Jews for sport or to vent their own class hatreds. Eventually, both peoples were separated by mutual hatred, but the Jews could only endure what most Poles accepted. Tiny Piatowka had its Poles who welcomed what befell their Jews. A few decent ones did not. All wondered if the Germans might kill them too, once Piatowka was made “Jew free.” No one could say for certain one way or the other.

The next morning, the SS major ordered all Jewish women, girls and small children to assemble at the town square by dawn the following day. Rachel, her mother, and sister stood next to their widowed and fatherless neighbors as the sun cleared the rooftops of Piatowka. Silence hung like a shroud over these Jews. Only the Rebbetsin was seen to pray, as her lips moved quietly to perform Kaddish.

One SS squad detailed to load empty trucks marched into place. Another squad moved among the Jews, pulling bundles or baggage from their hapless owners and tossing them aside. A third squad moved to secure the town plaza. There was no need. Every window, shutter, and door was closed to the events happening outside their owners’ houses. But the sounds of barking orders and intensifying weeping could not be shut out.

DC Diamondopolous | The Bell Tower
Cristina M. R. Norcross | When we strive together