IT WAS A TYPICAL sunny, warm, mid-September, Florida day. Eric Parsons was outside mowing his half-acre Bahia lawn, listening to his eighties-themed play list on his MP3 player, and enjoying an occasional nature-kissed breeze. His thoughts volleyed from story-writing ideas to how he could tweak his Fantasy Football team for the weekend games.

Suddenly, his attention was drawn to the cloudless sky by a bright flash, as if from a camera the size of the sun. His sunglasses were no match for the glare that partially blinded him. He blinked to restore his sight as another flash sparked closer to him. Shielding his eyes with his forearm, yet another flash invaded his vision a few feet in front of his push mower.

As the remnants of the flash subsided, a small, seamless, contoured ship, the size of a sedan and metallic blue in color, landed silently on his lawn. The oblong ship’s chrome dome slowly opened and a helmeted, human-limbed figure climbed out. The figure reached behind and removed the helmet with the touch of a button that activated an accordion-like movement that flattened the headwear. The figure, now female in appearance, and of normal human size, nonchalantly tossed the folded helmet into the seat, stepped away from the vessel, reached into a side pocket from her ribbed, deep blue body suit and exposed a flat object the size of a credit card. She held the object away from her and aimed it toward the ship as if she were taking a picture.

Suddenly the vessel vanished. She looked down at the object, as if confirming its disappearance, and then turned toward Eric.

Eric stumbled away from the alien and looked around for something to defend himself with.

“I mean you no harm, Eric Parsons,” said the alien, robotic but feminine in tone. Her straight periwinkle hair, with black highlights, was just above shoulder length, and featured jagged points at the ends. Her eyes were like the midnight sky with subtle clouds that seem to rotate around her iris. Her face was a faded scarlet in color.

“Who…who are you, and how do you know my name?” Eric stammered, wiping emerging sweat from his forehead and mentally questioning his sanity.

“What are you talking about? What’s going on?”

“My name is Jisa, the first inhabitant in the universe you created. I have traveled two thousand years into the past because I need your help.”

She handed Eric the object, or “infolat,” as she called it. Eric reluctantly took it from her hand and studied it.

“Stand back and take a picture of me, head to toe, by pushing the glowing violet button on the window,” Jisa said, as if she were a proctor giving test instructions.

Eric nodded slowly, still fixed on the infolat and the eerie coincidence that it, the vessel, and Jisa matched the exact descriptions from a short story he wrote years ago.

“Hurry, before I am detected.”

Eric held the infolat at arm’s length and did as instructed.

“Now, push the blinking green button on the window, hurry.”

Eric obeyed and watched her vanish.

Jisa’s face filled the screen as the sound of helicopters emanated from afar.

“Hurry, take me inside your home. I will explain everything there.”

Eric walked towards his sliding glass back porch door as the helicopters emerged into view over his neighborhood.

He stepped inside his ranch-style home, grabbed a can of cola from the fridge, and sat at his dining table.

“I put all my trust in you. You have the power to turn me over to the authorities as an alien invader. I am now helpless. Now I must…can I trust you?”

Suddenly, a violent, rapid knock on the front door brought a massive jolt to Eric‘s circulatory system. He hid the infolat in his jeans pocket, rushed over and opened the door to a team of uniformed men with intent, focused countenances.

“Federal agents, have you seen or heard any suspicious activity in your area, especially in your back yard?”

Eric wiped away sweat from his brow, gulped audibly, and uttered, “Uh, no, I haven’t. Is everything alright?”

“No need for alarm, sir. Are you sure you didn’t see or hear anything out of the ordinary in your backyard?”

“No sir, I was out mowing the lawn and came in for a beverage.”

“Okay. Take my card. If you do hear or see anything, please notify me.”

Eric slowly closed the door and kept his ear to it until they were out of earshot. He went to the front bedroom window to make sure they were away from his house.

“Is it safe now?” Jisa’s voice came from his back pocket. Eric quickly retrieved the infolat, followed her commands, and rematerialized her in front of his eyes.

“That was close. That infolat you created is an incredible object. Ingenious.”

“How can this be? This object came straight from my imagination, from a story written but not yet finished.”

“That’s why I am here, Creator. I have traveled this far back in time and space because my planet needs you to finish the story. The beautiful universe you created is in suspended limbo, and I have been chosen to communicate the importance of finishing your story.”

“I created a fictional universe! This is crazy or I‘m going crazy. How is this possible?”

“All I know is I appear before you because you created me. You wrote of my appearance, my vessel, the infolat, the time and place of my planet’s existence. You made life…then you just stopped. You then had a dream, which translated into a déjà vu or something, and that’s how I appear to you today. I beg of you to continue your story, so life can continue in the universe, my world, that you made and that takes place two thousand years from now.”

Eric rubbed the stubble on his chin, while searching for answers in the distressed wood floor. Jisa interrupted his thought process, explaining that the inhabitants of her universe were gradually succumbing to death from their suspended animation. Time was of the essence and Jisa grew more desperate with each passing moment.

“You are the creator! If you do nothing, all of the beings on my planet will expire shortly.

Her pleading eyes softened his countenance, and her persistence moved him to inspiration. He grabbed her velvety hand and led her to the dining room table where his laptop lay. He opened it up and navigated to the Word document that housed the origins of her universe. He carefully read the unfinished story while she looked on over his shoulder. He took a deep, soothing, mind-clearing breath, cracking his knuckles with meshed hands.

“Jisa, I am going to finish the story, but I don’t want you to know how it ends until you return to your universe.” She repositioned herself in the chair opposite and watched intently as he began typing. His eyes bled passion, adventure, and excitement as his eyebrows moved like waves in an ocean. After several proofreads and edits, he announced he was finished with his manuscript.

As if on cue, Jisa rose from her seat and kissed his forehead. He handed her the infolat and followed her out to the back porch, where she rematerialized her saucer. She turned back at him, fluttered her fingers, and bid farewell. She then entered the saucer, prepared for takeoff and disappeared in a flash, while police choppers provided an audible backdrop.

Jisa penetrated the saline dome that protected her world. She guided her vessel in a serpentine path around the rosy atmosphere and landed on Jitzoy, her home country. Her image was reflected over the skies of the orb like a light show in a planetarium. The inhabitants, who were frozen in limbo, slowly mobilized, and the fallen resurrected. All conflicts halted at the sight of her. Celebrations of joy and unity erupted across the globe. As written in Eric’s story and understood by all, peace reigned supreme, and Jisa’s return was the planet’s most historic moment. Eric’s words acknowledged her as the Queen of the Skies, Goddess of the Universe, and the Pipeline to the Creator. 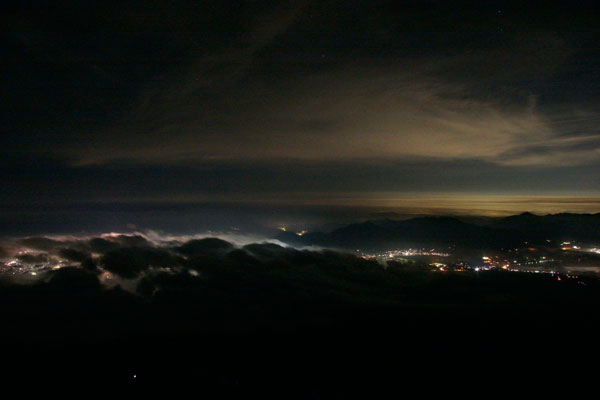