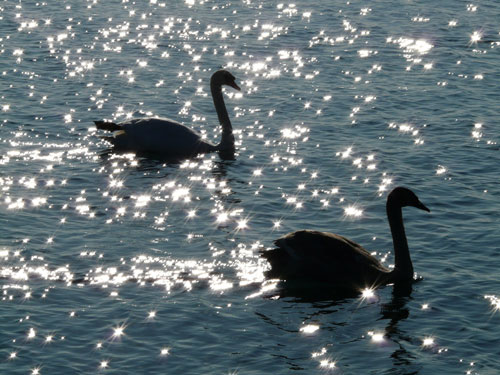 Sometimes their canoe will coast,
gliding over silence,
in an almost-sunshine day that so far
hasn’t begun to ripple the water.

The two of them seem to know
where they want it to go,
even without clunk or splash
of a guiding paddle.

Her back leans warm against his shins.
He feels her hair brushing his knees,
as they watch the mist
try to rise from the lake,
over by the tree
that seems always to glow.

She could have brought the newspaper
to read to him.
They could talk about anything at all.
But she didn’t, and they don’t,
even though their minds
always float in a single canoe,
flowing into same currents together,
wherever they happen to be.

There! She sees them at the instant he does.
Just around the curve of the shore –
there in the cove — is the white swan!
No, two of them — mates!
No words need to be spoken.

The swans’ necks curve in identical ‘esses,’
as, side-by-side they move together,
one sensing the other’s change in direction,
as if their flow had been choreographed
by a Dancer.

At some appointed moment
in this leisured morning,
swan-silence will guide them
out to the middle of the lake,
swaying, heads darting, swimming faster,
even faster into open water.

Then, together, their great wings will unfold
and begin to whip the air —
again, and again, and again.
Those cadenced whooshes
will be the only sound that is heard,
as they rise into dwindling mist,
gaining altitude,
beating farewells back down
to the lake.

Later the canoe will slowly glide
back to the house for breakfast.
They’ll talk. They’ll read the paper.

How they dance through the night until morning

An owl persists in questioning the darkness,
just outside their window.
She doesn’t seem to notice.

She curves away from him
and before he turns off the light
he watches the nape of her neck,

the wisps of her golden hair
as her breath deepens
into denser sleep.

His knees in the space behind her knees
and when she senses them
she drapes an ankle back over his calf.

Nuzzle is the word they would call this,
if he were a horse. But he is Nuryev! He is Baryshnikov!
and this is the Ballet of Slumber!

He drifts into the first Act, the Pas de Deux
that proves each night
the lasting nature of love.

The night deepens.
The owl has flown far into the forest
and left them to their own devices.

“Look!” the little boy shouts to his mother,
pointing his finger and dancing out
toward the old couple that totters by
on a tandem bike,
“Double Riders, Mom! Double Riders!”

And right away the two bicyclers
like the sound of that a lot.
Double Riders! For once not to be
those people on that bicycle built for two
that makes them feel as if
they somehow live in the dusty lyrics
of a very old song.

But Double Riders! – visions of canvas dusters,
coat tails streaming behind them,
silken scarves and slouching hats,
two figures arching forward at the strain,
exploding out of the setting sun
on gleaming wheels, pedals cranking,
bicycle breezing across that sandy-distance landscape
bent upon one more glorious exploit together!

Harry Youtt’s poetry is frequently published in literary journals and has garnered several Pushcart Prize nominations. He’s the author of six collections, the most recent of which is Outbound for Elsewhere. He has conducted poetry workshops and readings throughout the United States, as well as in Ireland, England, and Wales. A member of the editorial board of the international Journal of Consciousness, Literature and the Arts, he lectures internationally on topics related to consciousness, creativity, poetics and literature. For several decades, he has been an instructor in the UCLA Extension Writers’ Program.