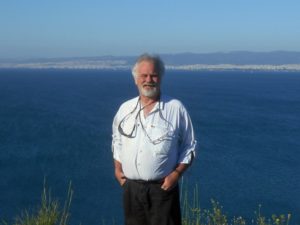 Bill Dienst, MD, is a rural family and emergency room physician from north central Washington who has been volunteering for humanitarian medical missions since 1982, when he was a young man in medical school. His first experience profoundly changed his life and he was “hooked,” he says, volunteering repeatedly for medical exchange programs in Veracruz, Mexico, the West Bank, and the Gaza Strip. Most recently he served as the medical coordinator for Salaam Cultural Museum (SCM), a Seattle-based nonprofit conducting humanitarian and medical relief work with refugee populations in Jordan, Lebanon and Greece.

After volunteering among Syrian refugees in Greece, Dienst and his fellow volunteers collaborated on a book about the experience. He is the co-author/co-editor of Leaving Syria (Cune Press), which is due out on May 20, 2017. Dienst previously co-edited and co-authored Freedom Sailors (Free Gaza, 2012), an account of how a small group of ordinary people conceived and successfully executed an audacious plan to break Israel’s military blockade of the Gaza Strip in 2008. Sailing in two dilapidated fishing boats, 44 “leaderless, hard-headed, non-violent peace activists” became the first to break the siege in 41 years. That voyage, of which Dienst was a part, launched the Free Gaza Movement.

Now 58 years old, Dienst has balanced his work as an ER physician at various hospitals in central and eastern Washington with periodic humanitarian trips abroad. The son of a US Air Force colonel, he grew up in various locations across the US and spent three formative years during junior high in Brussels, Belgium. He attended medical school at the University of Washington in Seattle and completed his family practice residency in Tacoma.

The MOON: What prompted you to travel to a refugee camp to provide medical care?

Dienst: I’ve done a lot of medical volunteer work in the Middle East over the years, and so have a lot of friends from the region. I knew there was a need to help with the rescue of refugees arriving in Lesbos, Greece, from Turkey, so when I had a period of time off last year, I used it to travel to volunteer with Salaam Cultural Museum.

The MOON: OK, I guess I’m wondering what prompted you initially to volunteer for medical relief work?

Dienst: I’ve been doing human rights work for Palestinians since the 1980s. I’ve been to Gaza or the West Bank 11 times, most recently for medical exchange work with Washington Physicians for Social Responsibility.

The MOON: Again, what motivated you to get involved, especially in such controversial and dangerous areas?

Dienst: [Laughs] In 1982 I was a medical student in my 20s, when Israel invaded Lebanon to eradicate the Palestine Liberation Organization (PLO). That invasion culminated in the massacre at Sabra and Shatila, which got my attention. For people who don’t know, in September 1982, following PLO withdrawal from the region according to the terms of a ceasefire, a militia group allied with Israel systematically killed between 2,000 and 3,000 residents of Sabra and Shatila, mostly Palestinians and Lebanese Shiites. The Israeli Defense Forces blocked the exits of the towns to prevent residents from fleeing. I became an activist at that point, although I didn’t go over there for the first time until 1985, when I stayed five months—extending a year of medical school to do it.

I returned to the Middle East in 2003, right about the time George W. Bush launched his war in Iraq, and also about the time Rachel Corrie was killed by an Israeli bulldozer in Rafah, Gaza. When you go there and see what’s going on, it’s hard to just let it go. I’ve been back 10 times since 2003.

I believe in equal rights for all people—and that includes all people in Israel and Palestine. It’s not right that the Israeli occupation and settlement policies are stealing more land from Palestinians and squeezing them into the world’s largest open-air prison, with little hope for their future. I try to do what little I can about that.

Through that work, I was led to doing relief work with Syrian, Iraqi, Afghan, and Pakistani refugees in Greece. I’ve also been in Egypt and Jordan.

The MOON: What have you seen?

Dienst: In the West Bank—which is 22% of historical Palestine—a little over half of the land has been confiscated for exclusive use by the Israelis—Jewish settlers. Palestinians who live there are stranded in enclaves surrounded by walls and Jewish-only settlements and Jewish-only highways that they can’t use. It’s very difficult for them to earn a living, or access goods and services. This is in the context of more than 20 years of so-called “peace” negotiations, during which more and more of their land is confiscated, while the Israeli settlement population mushrooms. There is very little land left for “a Palestinian state.”

In Gaza, the Palestinians are surrounded by a huge Berlin-like wall and, with very few exceptions, are not allowed to come and go. One point eight million people are crammed into an area about 25 miles long by about five miles wide, or about 125 square miles. The water supplies are marginal because all of the upstream supply is controlled by Israel. Israel also controls what goes in and what comes out of Gaza. It’s really a concentration camp, which is a term first used in South Africa. Gaza fits the definition. Most Americans don’t realize this because we’re kept in the dark out of so-called defense of Israel.

The MOON: And you were there to provide medical care?

Dienst: Actually, there are two medical schools in Gaza, so they have plenty of doctors. What they don’t have is access to post-graduate medical education. I’ve been there 11 times since 1985 under different auspices, most recently with Washington State Physicians for Social Responsibility.

As you might imagine, it’s a very arduous process to get in there. Dr. Bob Haynes, a colleague, and I have been able to provide Advanced Cardiac Life Support (ACLS) courses, with support from agencies in the West Bank. After several improvisational courses, we were finally able to deliver American Heart Association-certified courses to give doctors in Gaza the latest in ACLS. Our delegation has other specialists, too. A general surgeon teaches advanced surgical techniques at one of the medical centers. Mental health specialists, an expert in child autism, and others engage in projects to empower Gaza’s own healthcare providers, rather than going in there and doing the doctoring. For one thing, most of us speak very limited Arabic, so we’d be of little use as primary care physicians. Besides, they have their own doctors. We offer support to them.

The MOON:  Now let’s talk about what you’ve seen in Lesbos, Greece.

Dienst: Sure. And I hope you’ll have a chance to read the book, Leaving Syria, because it’s impossible for a single report to do the situation justice. It’s an ever-changing landscape. For example, in the months prior to my arrival at the end of February 2016, as many as 10,000 refugees were coming ashore on a daily basis. That peaked in October 2015.  So an infrastructure had been developed by various NGOs to mitigate disasters like mass drownings and provide support to refugees upon their arrival in Lesbos—which is an island, by the way, not a city. At the same time, there was international political pressure to try to reduce the number of people attempting the crossings.

When I arrived at the end of February 2016, the number of crossings had dropped substantially, so after a couple of weeks we moved our operations to the Greek mainland and a little farming village called Idomeni. This village is strategically located on the Greek-Macedonian border, where in the ballpark of 15,000-20,000 refugees were stranded. The Macedonian government had built something akin to an Iron Curtain to block refugees’ further travel through their country and into northern Europe—where they were principally heading to Germany and Scandinavia. By this time, Germany had already accepted close to a million refugees.

When we got to Idomeni—again, I was working with Salaam Cultural Mission—we partnered with other small NGOs to provide mobile urgent care health clinics to the refugee camps at Idomeni and a smaller camp at Eko—which was set up next to a gas station—that’s how impromptu and makeshift these camps are. We also partnered with large NGOs like Doctors Without Borders, International Rescue Committee, the UNHCR (UN High Commission on Refugees), and others—including the Greek government—to try to respond to the crisis. But our support, by its very nature, had to be improvised because the situation was constantly changing.

Of course, Greece and Turkey both had their own financial and economic crises prior to the refugees’ arrival, but these two countries have shouldered the lion’s share of the global response. Their situation is being exacerbated as northern Europe shuts its doors and is unwilling to accept additional refugees. The US government has been even stingier than Europe, allowing only about 10,000 Syrian refugees to enter the country.

The MOON: Yes, I want to ask more about that, but first can you tell us what kind of medical care people were in need of? I started reading your book and know that many people drowned, or nearly drowned, or came in soaking wet and suffering from hypothermia. Was that the primary health issue you faced?