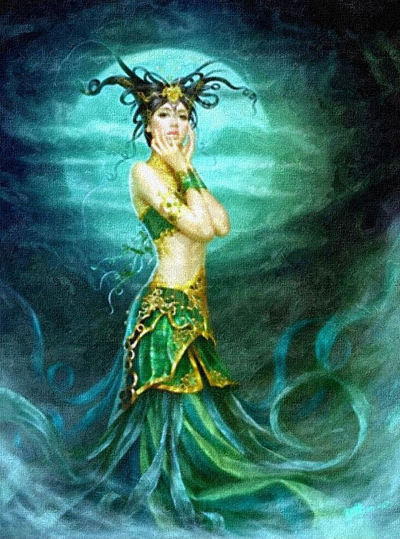 I have many times been a mother, but it was the foundling I loved the most.

My natural born children were charmed and charming, graced with beauty and gentle dispositions, and my heart still swells with pride in them. And yet it was Hephaestus, crippled, prone to fits and tantrums, whom I loved above all the others. He needed me.

How strange our little family was—an Oceanid and a Nereid raising an imperfect god. They were the happiest years of my long life. Thetis had not yet given birth to the swift-footed Achilles. She learned to be a mother tending to our cranky god-child. We taught him to call us Auntie, not mother, for Hera, though she cast him out, would have surely taken offense. There I was, third wife of Zeus, long since forgotten by him, raising his child with his sixth wife, and sleeping each night in the arms of Thetis, a woman he had wooed until he had a vision that her son would surpass his father in greatness.

While Hephaestus honed his craft in the hollow of our cave, delighting us with his fantastical creations, Thetis and I would lounge by the stream of Okeanos. I liked to lay with my arms around her, fingers playing in her long, silken hair. Sometimes I told myself that Hephaestus, our boy, was the child who would fulfill Zeus’ prophecy. He was in practice Thetis’ son and mine—if only such a thing were possible!—but I knew this was mere fantasy.

The truth, I understood, was that Hephaestus would grow up and take his rightful place on Olympus, and without him to bind us, Thetis would leave me for a man and give birth to an extraordinary boy-child of her own, just as Zeus foretold. How I wished our little inventor would stay a babe forever.

Sometimes, as Hephaestus plodded through adolescence, I would awaken gasping in the night, choked by fear that in the morning I would find him gone. I would slip from Thetis’ sleeping grasp then and go to the river, merging with the water, taking my fish tail up again. I would swim against the current, swim and try to remember what it felt like to be free.

Before my years with Thetis, I was never comfortable in my human form. I preferred my iridescent scales to skin, my strong tail to two legs. I loved the lightness I felt in the water as it buoyed me up, and I hated the heaviness of my body when I stood on dry land. It never made sense to me to take a human form with all its limitations when I could fly through the water.

That was all before I knew how pleasing it could feel to lay in the bed with my legs entwined with hers, the electric thrill of her velvet-smooth skin against mine. My human form didn’t feel like a burden anymore when it was pressed against hers.

At first, on my nighttime swims, I would stay near the cave in case Thetis or Hephaestus woke and needed me. As time went on, though, I ventured further and further, back to my old haunts, staying out sometimes several days, long enough to make sure my little family missed me.

Often, listless in my wandering, I visited Arkadia where the waters flowed together and river banks were steep cliffs ringed with cypress trees. There, where the Phigalians keep my sanctuary, I liked to linger in the pools and eddies and thrill the mortals by rising from the water. In the voice of the Okeanos I would remind them of their sacred duty to protect the rivers and streams, to take no more fish than they needed, and to remember that I watched over them and would bless them for their obedience. Remembering my immortality and my duties as an Oceanid didn’t make me feel any better, though. Instead, I would leave my sanctuary wishing for mortality, jealous of the people who trembled at my voice.

It was always Hephaestus, not Thetis, who clung to me when I came home. He made gifts for me—small sculptures of sea creatures carved from smooth stone or metal trinkets like decorative hairpins—and he would bring them to me, smiling but cautious, scanning my face for signs that I would not leave him again.

Thetis, for her part, would act as if I had never been gone. She would greet me as casually as if I’d simply overslept, “Oh, hello, Eurynome,” her voice neutral, her body language relaxed, but her eyes cold. Every time a little colder.

I dreamed of her throwing her arms around me and begging me never to leave her that way again. Every time I slipped away in the night, I thought this time she’ll see how much she needs me.

I was away when Hera sent the messenger that Hephaestus would be wed. His artistry had not gone unnoticed by his parents, and though his misshapen body still shamed them, his skills in metalwork and masonry nearly made up for his defects. With the right wife, he could take his rightful place of power on Olympus.

When I came home, I found him gathering his tools. He was so happy, singing to himself as he worked. His mother had promised him Aphrodite. As soon as he told me, I knew his would be a marriage full of heartbreak, but what could I say? All his life, despite the love Thetis and I showered on him, he had longed for the acceptance and approval of his parents, and now, finally, he had it.

“I’ll visit you,” he said. I made myself smile in reply.

And where was Thetis? Gone. Already gone, or so I thought. When I asked our boy, he just looked around and shrugged.

“I made you a gift,” he said, and he brought me a talisman, an eel carved in obsidian, its body bent to form a lightning bolt. He had threaded it on a leather cord. He reached up and draped it around my neck so the stone hung between my breasts. It felt pleasantly warm to the touch, as if a bit of the volcano were trapped inside. I pressed my hand over it and tears came to my eyes.

“I’ll be okay,” he said, brushing a tear from my face.

Children, always thinking of themselves. I could have almost laughed at his self-centeredness, but then, we made him that way, Thetis and I, letting him be the center of our world until he believed he was. Yes, I thought, you’ll be okay, but will I?

That night Thetis returned. She crept into the cave in the night, her eyes bloodshot and red-rimmed. When I saw her, I opened my arms and she rushed into my embrace. She curled against me, seeming small and fragile.

“Is this always what it’s like when your children leave you?” she asked, pulling back and looking into my eyes.

No, it wasn’t always like this, not for me. This felt like betrayal, not like the natural process of a child growing up. He was trading our family where he had been loved unconditionally for the one that never wanted him until they had a use for him.

“I tried to talk sense into her,” Thetis said.

Thetis always was braver than I.

“Aphrodite will never be satisfied with him,” she said. “But Hera’s mind is made up.”

But she interrupted me. “Kindness counts for nothing on Olympus.”

I knew she was right. Hadn’t I experienced that myself when Zeus picked me out as his bride?

“He’ll learn to fend for himself,” I said.

In the morning, we held onto each other and watched him leave. When he was gone, the cave seemed unbearably empty. My legs ached and I longed to take to the river, to let my tears flow freely and be washed away by the current.

“You can come with me,” I said, kneeling before her and taking her hands.

She shook her head sadly. “He always loved you best,” she said, tracing the curves of the carved stone.

She set the stone flat against my skin again, pressing her hand over my heart.

“I’ll never love another the way I love you,” I said. She nodded and I did what I knew I must do. I dived into the current without looking back.

It has been a long time since I last went ashore, so long I hardly remember what it feels like to walk on two legs. I stick to the water now, to the remotest parts of the river where people never visit.

People themselves never visit, but signs of them are everywhere. Just this morning I found an osprey tangled in shreds of plastic, its efforts to get free only causing the web to pull tighter. It eyed me warily but let me free it and then beat its wings and flapped away as if it feared I would ensnare it again if it stayed.

There are new fish in the rivers now, too, strange spiny, nasty fish that multiply faster than the native species. Somewhere downstream someone must have introduced them, I can only by hope accident, and now they are here, there, everywhere. I pluck them from the water and fling them on the rocky bank for the birds to eat. It is futile, I know, like trying to swim against the current of time, and yet, what else is there for me to do? The river is the child that will always need me.

Eurynome, the protagonist of this story, was a deity of ancient Greek religion worshipped at a sanctuary near the confluence of rivers called the Neda and the Lymax in classical Peloponnesus. One of the elder Oceanides, that is, a daughter of Oceanus and Tethys, she was the third bride of Zeus and mother of the Charities, goddesses of grace and beauty.

Diane V. Mulligan is the author of three novels, most recently What She Inherits, which was named Honorable Mention in the 25th Annual Writers Digest Self-Published Book Awards. She is a high school English teacher in central Massachusetts.