Devon Balwit | Shamanism for our times

From the Book of Wisdom

Scorn diamonds,
and neither covet

gold. Care not
for youth or the lifted

plinth. Suckle not
at the mouths

of flatterers.
Turn your back

on the cheek-busker
and the feathery

Keep to the outpost,
to the tiny island.

Press your lips
to the deep well

of the bite. Draw off
darkness as you listen

for the lone bird,
the one that sings

for you, and for you
only.

The alien language resembles circles of ink blown
through a straw. Fluency

means synchronicity, living all moments, ever,
in any. When queried

for images, the search engine offers a hummingbird
mid-hover, florets

of barbed-wire, fighter jets fanning into Vs, a cascade
of palm fronds, a satellite’s winged

I question the algorithm, then look again. All splay, black
blown on blue. Ask me,

and I will divine the hodge-podge. Like a Sybil at her vent,
this poet leans in.

running a river into the cabinet drawers
and under the refrigerator, carrying a silt of grinds

into every crevice. I want a magician’s wand
to transform rage at small thwartings into music,

to presto curses into laughter, helping me
move on. Little in life is what I expect, but much

is better, the upthrust seeds of Echinacea, a hawk
in an updraft, a child speaking wisdom unprompted.

Even if I break, I come apart in a world
beautiful somewhere, like the jaeger fledgling

I found huddled in sand, spending its final hours
looking at surf and horizon. I hope I die

in such a spot, waves shushing regret. Hack
at our lightless places, and we come away

with glittering, the mineral, something that bruises
when clenched and outlasts the sweat of release.

I imagine truth distant and then trip on it on my way
to the bathroom at night, a castoff shoe, a book,

the dog’s bowl, mysteries requiring no other
novitiate than my attention. Endlessly, I work

my trowel, shoring up walls that a single
quake jars and a second brings down.

Mother wolf tilts muzzle to the ground,
ever so gently unhinging her jaw to release

her children. Owl wings from parted canines
to perch among boughs, fox scrabbles

into a deep den, sparrow flutters after
seed, horse stamps mournfully down

then lifts her hackles and coughs out
the final two, woman and man. She pins

them to earth with a paw, claw tip to jugular
and considers piercing. Ever so slowly, she

releases them, then throws back her head
and howls. All pause to watch the naked ones

scramble away, feeling in their flesh the coming
desolation. It won’t be soon, but it will be.

Moonlight kindles the leaves into tapers.
A passing breeze quenches each bright wick.

The park is fuller than I’ve seen it. Walkers
cluster about the lake’s August perfection.

No one notices. Two by two, like monastics
in procession, the park-goers are lost to rite,

attentive only to the buzzing of their phones,
to lures and Poké stops. Unmoved by ephemera,

they add to menageries, defend Mystic,
Instinct, and Valor, without ever raising

their eyes. Their world is pixelated.
Of such devotion, their God must be proud.

A Hedge of Bright Feathers

Every morning, passing beneath,
I await the lift of her wings,

her swift plummet, but she never moves,
busy about her own

the freeway, the squatters along its banks.
Partisan, I wish her a fat rat,

a squirrel kit to fuel her vigil, whatever
would keep her here,

a hedge of wildness against rebar and
encroaching concrete. 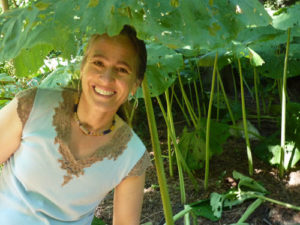 Devon Balwit has five chapbooks out or forthcoming: How the Blessed Travel (Maverick Duck Press); Forms Most Marvelous (dancing girl press); In Front of the Elements (Grey Borders Books), Where You Were Going Never Was (Grey Borders Books); and The Bow Must Bear the Brunt (Red Flag Poetry). Her work has been published both in print and on-line in places such as Psaltery & Lyre, In Layman’s Terms, In a Woman’s Voice, Poets Reading the News, The New Verse News, and more. She is on Facebook.